Market growth in recent days has allowed the crypto market to break the $2 trillion mark for the first time. It took only three months for the cryptocurrency market capitalization to double, from 1 trillion to 2 trillion.

For the past three days, the entire market has shown significant growth, with the exception of Bitcoin. Let’s see if this is worth expecting from the first cryptocurrency: 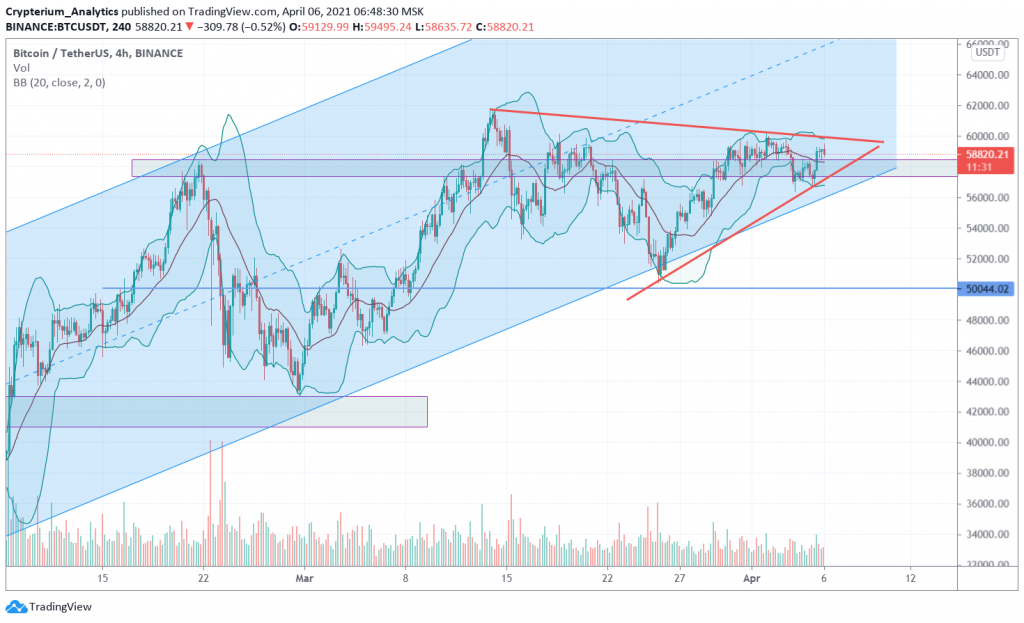 In the last week, the volatility of Bitcoin has significantly decreased and is 2-3% per day. This is a very low figure for the first cryptocurrency, which indicates a wait-and-see phase.

Yesterday’s daily candle closed above $58,000. Since March 30rd, the chart has been moving around the range of $57,000 – $58,000. Sideways volumes indicate a high level of trade at these levels, which may indicate an accumulation phase.

At the same time, the price is trapped in a narrowing triangle for 2 weeks. This is preparation for a strong new price movement. This is indicated by the above signs.

If you look at the Bollinger Bands indicator, a good picture is drawn. For a long time, the price moved near the upper band and only at the beginning of April reached the lower band, which can be called unloading.

After that moment, the chart reversed again and has already reached the Bollinger middle line. It is highly probable that this movement will continue all the way to the upper band, which ideally coincides with the upper border of the triangle at $60,000. From this, we can conclude that this particular zone is the key one at the moment.

Today we will see another testing of this resistance. A strong confrontation between buyers and sellers will unfold here. However, it seems that the bulls can win, as many premises indicate this. In this case, the price can reach ATH within 2-3 days.

Most likely, Bitcoin’s jump up will not end there. The first target will be the $67,000 level. After a short idle near this mark, the price of Bitcoin may head towards $72,000.