The capitalization of Bitcoin became less than $1 trillion. Following Bitcoin, the entire crypto market fell; for example, Ethereum fell from $2,000 to $1,400.

This fall happened against the background of the fall of the entire stock market and the head of the US Treasury’s statements. Janet Yellen said that cryptocurrencies are highly speculative assets and are not suitable for transactions. As a result, the price of Bitcoin dropped by $5,000 per hour.

Additionally, this resulted in the liquidation of $5.5 billion worth of long traders per day. This is a new record for liquidations on the crypto market. Following Bitcoin, altcoins also fell, but even more – from 20% to 30%.

But the community was encouraged by the fact that companies like Square and Microstrategy bought additional Bitcoin during this fall. So, Square bought Bitcoin from its reserves for $170 million, and now Bitcoin makes up 5% of all the company’s reserves. Microstrategy raised $1 billion in convertible bonds and again bought Bitcoin at an average price of $52,000.

However, during this panic, a significant fact went unnoticed – Bitfinex and Tether could resolve the SEC’s conflict, which lasted for 3 years. These companies will pay a total fine of $18.5 million. At the same time, there was no wrongdoing evidence, which adds optimism to the entire crypto market.

Another important positive news came from Coinbase – the SEC approved its application for a direct listing on the Nasdaq stock exchange. Coinbase shares are tentatively priced at $375. With such figures, the largest American crypto exchange is estimated at over $100 billion.

Against this backdrop, rumors resumed regarding the IPO of the second largest American cryptocurrency exchange Kraken. Based on Bloomberg, it became known that Kraken plans to get an estimate of its capitalization above $10 billion. Let’s see if they can do it. 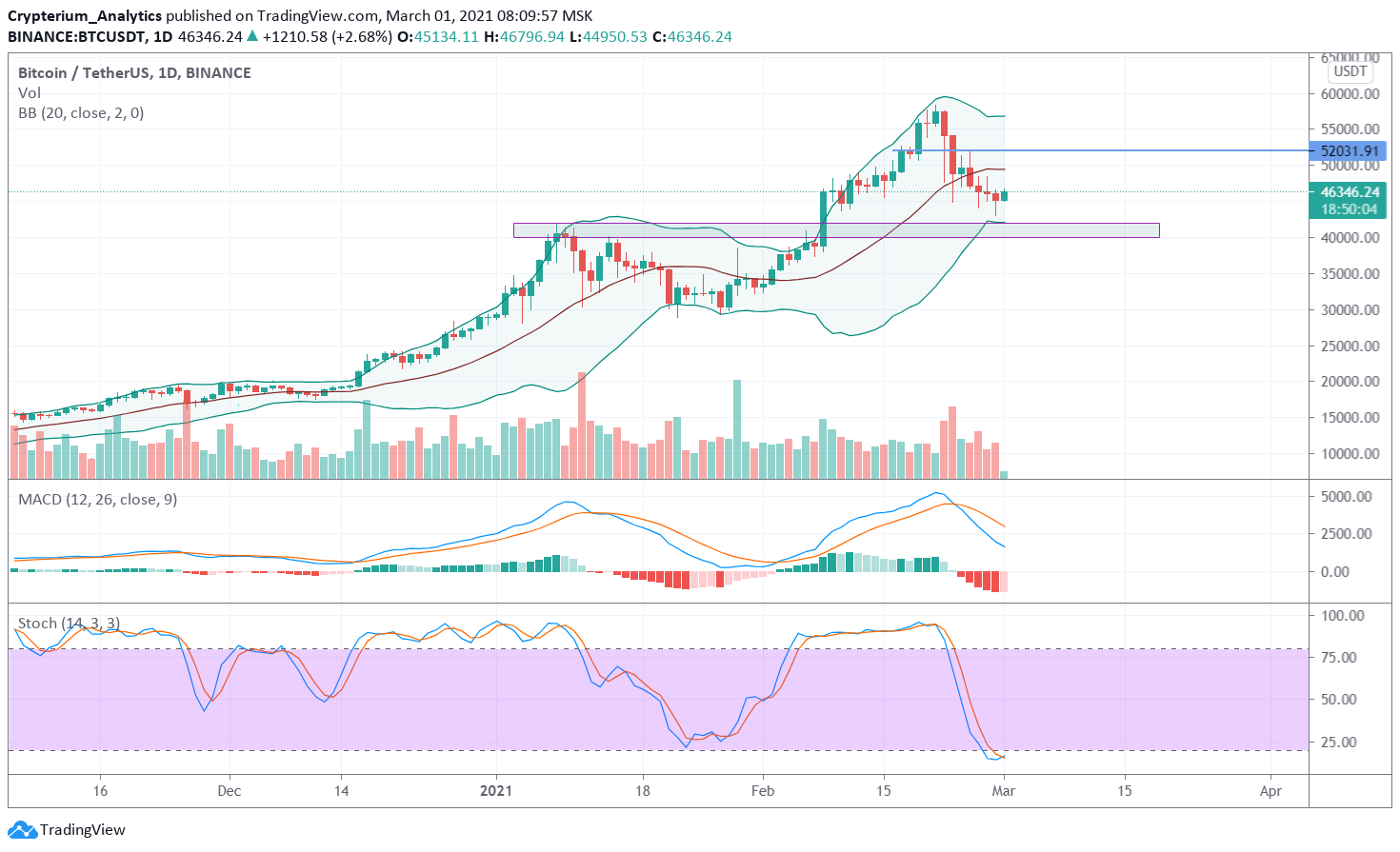 Over the week, the price of Bitcoin fell by $15,000, or 26%. However, this had almost no effect on the uptrend. The chart continues to indicate further growth prospects. The closest support level is in the $40,000 – $42,000 range. There is a high likelihood that Bitcoin may come into this range this week. Bollinger bands also indicate this.

At the same time, other indicators such as Stochastic indicate that the chart has broken through the oversold line. However, at the same time, divergences appeared on the indicators, which signal a possible fall.

On the other hand, the MACD indicates that a reversal is in the offing. However, at the moment, this probability is quite low.

Also, the weekly candle closed very badly. This formation is called a bearish engulfing formation and adds negatively to Bitcoin.

Thus, we can say that the market is still in turmoil. There are many multidirectional signals on the chart and indicators, so it’s difficult to say with certainty where Bitcoin will go this week. It is necessary to monitor the schedule in the coming days closely.

However, while we expect the fall to $40,000 – $42,000 is the most likely. It’s time to make the right decision; fix your profit and buy back next week, or hold your investments. Read our analytics every day to understand when the market situation will change.