Ethereum has also broken the important psychological $2,000 mark and is gearing up to storm ATH. We have previously warned that we expect to see it this week. Now we will take a look at the Bitcoin chart in order to understand in which direction its price will move further: 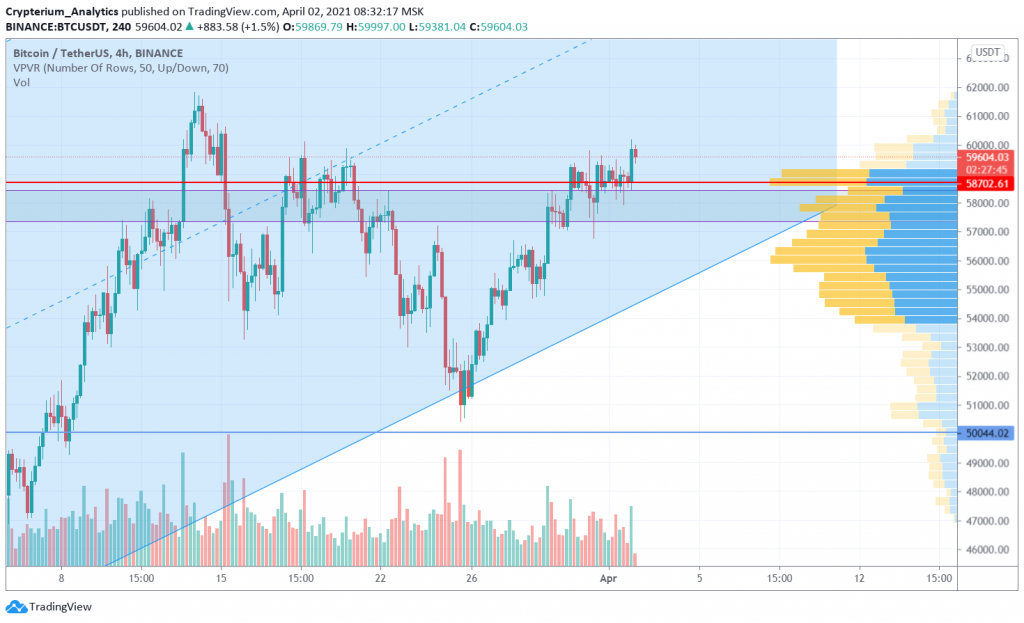 Bitcoin has broken through a strong resistance level in the $57,000 – $58,000 range. But even more important is the fact that the price was able to gain a foothold above this level on the 4-hour and daily timeframes.

Sideways volumes indicate that there has been significant accumulation in the $58,700 area. The first results from this are already visible – the price rose by 2% and reached $60,000. It is important to note that on this upward breakout, we observed a significant increase in volumes, this is especially clear on the hourly timeframe.

Today we will see new attempts to break through $60,000 again and, most likely, the price will be able to gain a foothold above this level. In this case, the price will go to storm ATH. It is highly likely that this weekend we will see new all-time highs in Bitcoin. It is possible that the chart could go up to $64,000. If during this growth, it turns out to collect stop-losses of the shortists, then the price can fly up to $66,000 – $67,000.

It should also be noted that March was positive for Bitcoin. During this period, its price increased from $45,000 to $58,000, which is 30% per month. This is 6 months of growth in a row. Bitcoin had similar a result only once in history – in 2012-2013. Then, after rapid growth, the price fell by 33%. We know that history repeats itself, so we advise you to trade Bitcoin very carefully now. Use Crypterium AI Price Predictionsto reduce unnecessary risks and identify better entry points for your trades.