Bitcoin’s dominance in the market continues to fall and is already 52%. As a result, yesterday we saw a massive rise in altcoins.

The biggest surprise was Dogecoin, which once again rose sharply – by 100%. Thus, its price is now $0.24 with a capitalization of $34 billion. This allowed the coin not only to rise significantly in the ranking but even to get into the Top-10 largest cryptocurrencies.

Such strong growth was caused by the transition of Bitcoin to a sideways movement, so let’s take another look at its chart to understand what to expect from the crypto market in the coming days: 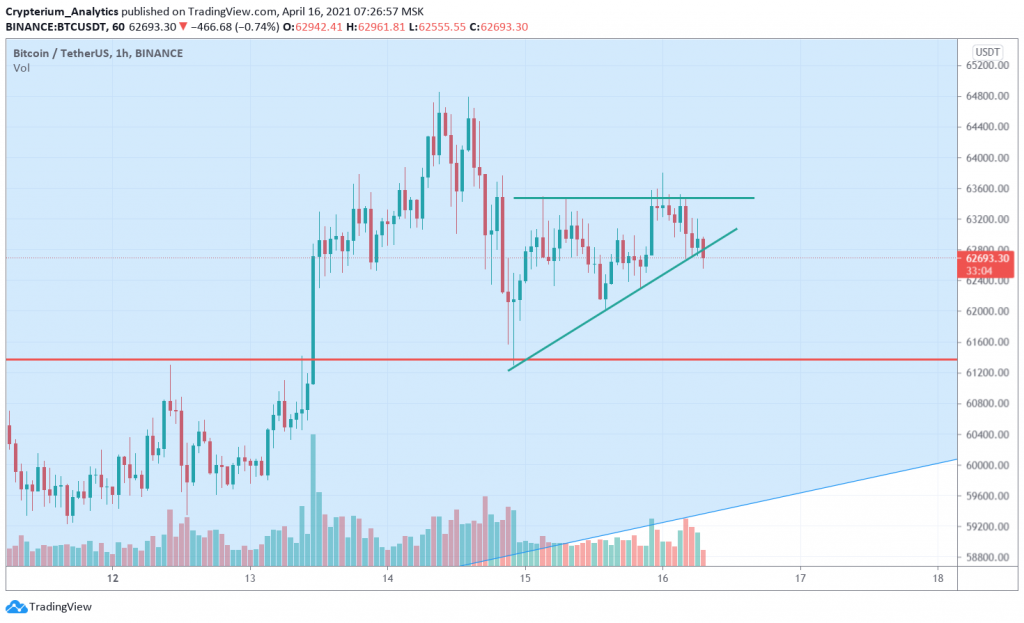 The price rushed upward at a high speed and increased by 5% after the breakdown of the $61,500 level. Bitcoin set a new ATH at $64,854 and then began to decline. The price fell to $61,300, testing past resistance from top to bottom. However, from that moment, buyers activated and very quickly bought back the fall, bringing the price back to $63,000. This is a good signal for the price of Bitcoin.

After that, an “ascending triangle” figure began to form on the chart. In this case, it is necessary to carefully monitor the boundaries of this triangle. At the moment, the price is moving along the lower border and if it can gain a foothold below it, then the price may fall again to $61,500.

We can definitely say that Bitcoin has moved sideways. Perhaps we are now witnessing a phase of accumulation before a new upward movement, which is more likely. In this case, the price can very quickly reach the $70,000 – $72,000 range. Most likely, this is where the next major resistance will be located.

The growth of Bitcoin is also indicated by the domination chat, which has been declining almost non-stop for two weeks. All indicators on this chart are highly oversold, both on the daily and weekly timeframes. This indicates a rebound in domination upwards, which means an increase in Bitcoin. If you plan to hold bitcoin, the best choice will be to make a deposit with up to 5,6% APY.