Trading volumes dropped significantly and amounted to $50 billion per day. At the same time, a few days ago this value was 2.5 times higher. Volatility has significantly decreased and is about 3%.

One gets the feeling that the market is full of anticipation as if traders and investors were not ready for this turn of events. This is a rather fragile situation in which any news can significantly stir up the market.

Let’s see what to do in this situation. 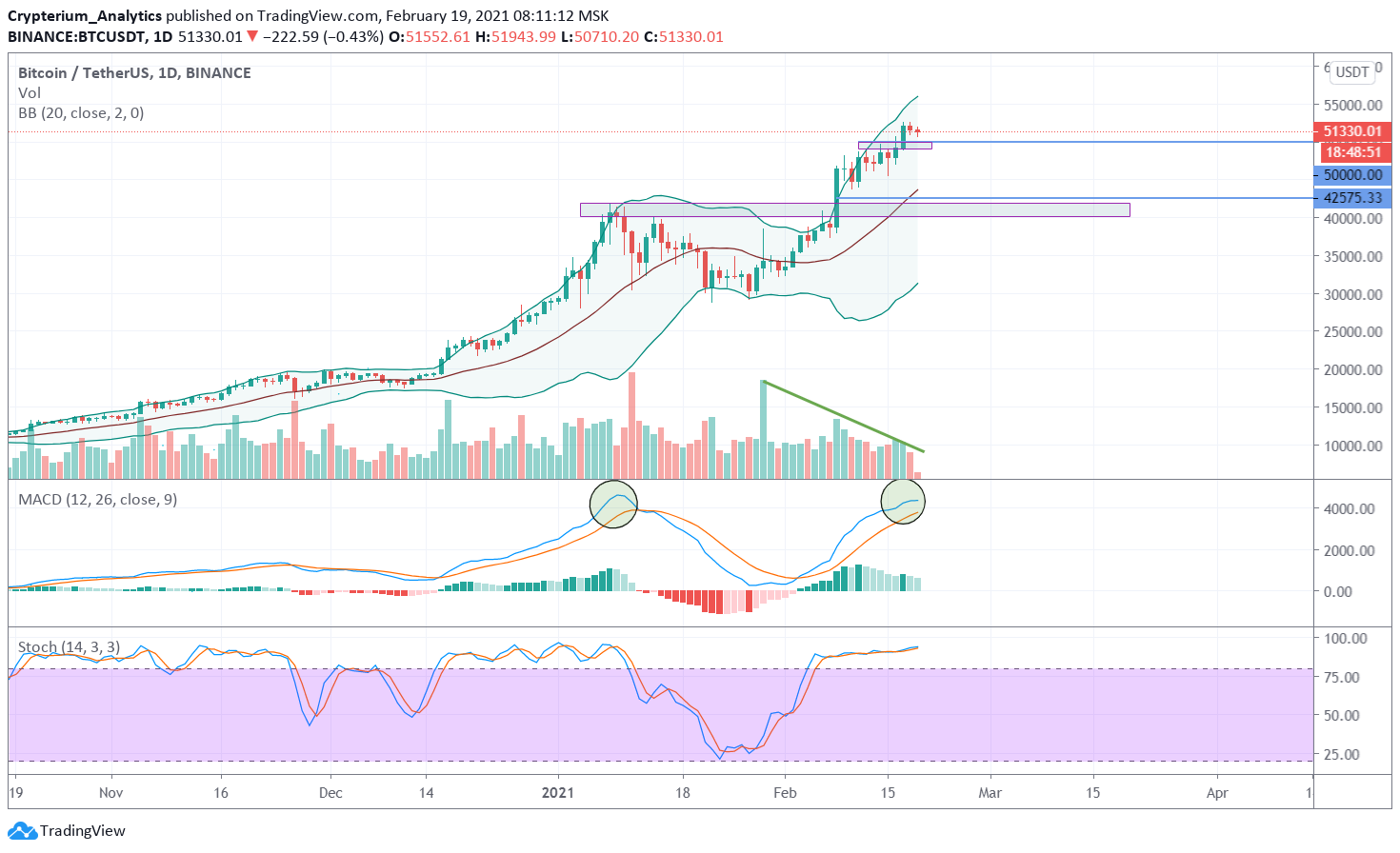 The chart has been moving upward with little or no correction since October 2020. But if earlier there was great potential for growth, now it has decreased, despite the fact that large corporations are entering Bitcoin. It is possible that the current movement is starting to dry up.

This is indicated by discrepancies between the price chart and the volume chart. As we can see, the price is growing despite the fact that trading volumes have continued to decline since the end of January. Thus, a bearish divergence is formed.

A similar structure is being formed on the MACD indicator. We marked 2 tops on the daily timeframe, which are approximately at the same level. But at the same time, the same points on the chart have a significant gap in favor of the second top. At the moment, this is a bearish signal. This can change if the second top on the indicator overlaps the first top. To do this, we need to see the price rise as in the range from $60,000 to $70,000. Then this bearish signal will be irrelevant.

We are not suggesting that we will fall now. But after the breakdown of $50,000 and the subsequent stagnation of the chart, the option with a fall increases the probability. At the same time, we can still see growth both up to $70,000 and up to $100,000.

What to do in this case?

First of all, you need to protect your positions with stop-loss orders. We would advise you to set your stop-losses at a distance of 10%. You can also buy Bitcoin even at current prices, in which case the optimal stop-loss will be at a distance of 5% or below $50,000.

After breaking through $50,000, the market entered a new phase of understanding Bitcoin. This has greatly attracted the attention of the general public to cryptocurrencies, so we can still see further growth, but increasing your deposit at times on Bitcoin will now be a very difficult task because the probability of a fall increases every day.

We think that a really big correction is brewing in the range of $30,000 – $5,000. But so far it is not so close, so you can continue purchase, you just need to take this fact into account. This situation can last from several weeks to a month, so be careful and hold your deposits on a super-secure, easy-to-use, multi-currency wallet.