Absolutely the entire market is now in the red zone and shows a downward trend.

Let’s figure out what is happening on the Bitcoin chart and see if we should expect new falls in the near future: 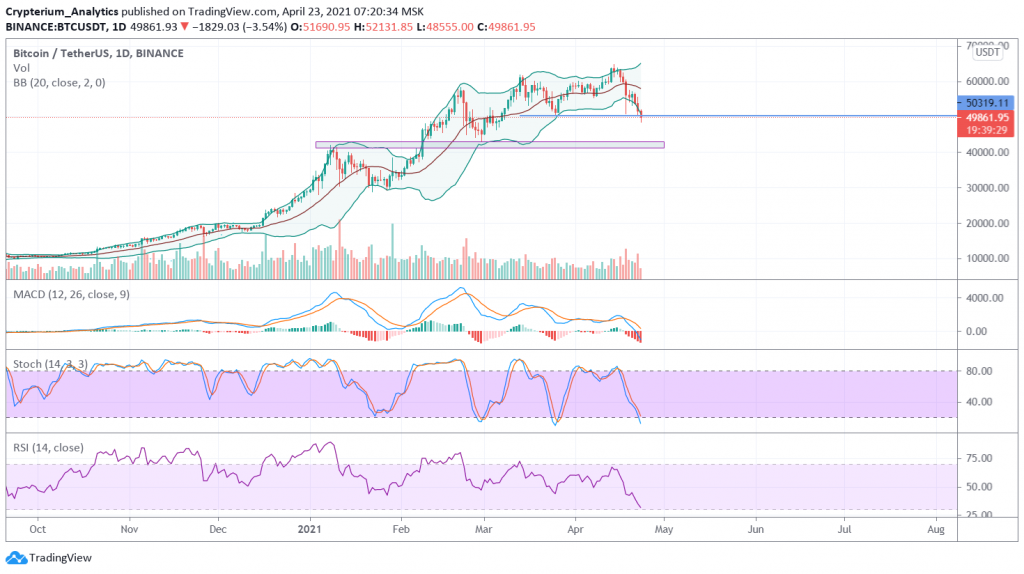 Bitcoin fell from $55,500 to $48,500 in a day. However, buyers quickly bought back the fall and returned the price above $50,000. This is a pretty strong drop considering that literally last week we saw $10 billion in liquidations. At the $50,000 mark, it can be seen that buyers practically do not hold positions.

The $50,000 level is key on the chart. Yesterday’s daily candle came close to it, but could not fix below. The volumes increased slightly and now amounted to $82 billion per day. This is about 40% higher than on quiet days, which suggests that the current decline is taking place on higher volumes in a weakened market.

Indicators do not add optimism. RSI is showing a significant decline and has already reached the oversold level. Judging by the current structure, the RSI is likely to go much lower. Stochastic is also showing a steep decline and no signs of a reversal are seen yet.

MACD began to work out the strongest bearish divergence and began to go down. For the first time in six months, he reached zero and broke it from top to bottom. The plummet drop on this indicator is also increasing and will continue in the coming days.

All of these signs indicate that Bitcoin’s decline will continue, with the next major resistance in the $43,000 – $44,000 range. If the Bitcoin price fixes below $50,000 on the 4-hour timeframe, it will be a clear signal to sell Bitcoin.

Altcoins began to follow in the wake of the first cryptocurrency. The whole market started to fall and this is a very bad signal. The rest of the cryptocurrencies are falling by an average of 15%, which is significantly more than Bitcoin.

Therefore, the dominance of Bitcoin in the market is increasing. All of this points to the fact that the flow of capital from altcoins to stablecoins and Bitcoin is increasing.