Bitcoin’s dominance in the market fell sharply from 61% to 53%. This was due to the massive growth of altcoins.

The main event of the week was the return of XRP to the Top-5 cryptocurrencies by capitalization. This was due to the rapid growth from $0.63 to $1.50. Thus, the growth amounted to 150% for the week. This was all driven by the good news for the XRP.

First, the judge granted a petition by XRP management to provide SEC documents, which provide a rationale that Bitcoin and Ethereum are not securities. Based on this data, the company hopes to prove that XRP is not a security either.

Additionally, the court denied a request for disclosure of the personal financial statements of the company’s management, represented by Brad Garlinghouse and Chris Larsen. All of this put XRP in a positive light and the community immediately responded with a large volume of purchases.

Another investment in Bitcoin was carried out by MicroStrategy. This time they bought 253 Bitcoins at an average market price of $59,339. The purchase volume was about $15 million. Thus, Microstrategy increased the volume of purchased Bitcoins to 91,579 BTC. In total, $2.2 billion has already been spent for these purposes, and Microstrategy continues to be the largest public company in terms of the volume of stored Bitcoins.

Coinbase released Q1 2021 financial statements. From it became known that the company’s revenue was $1.8 billion, and the net profit was approximately $800 million. This is the absolute best quarter ever for Coinbase. In anticipation of a direct listing on the stock exchange, this could raise the company’s capitalization above $100 billion. As a reminder, Coinbase will be listed under the ticker COIN on the Nasdaq exchange on April 14th.

The hype around the NFT industry continues to unfold. It became known this week that one of the best mixed martial arts fighters in the world, Khabib Nurmagomedov, is releasing his own NFTs. There will be 3 types of cards in total: Gold, Platinum and Diamond. All of them will vary in price, and the Diamond card will be one of a kind and will be put up for auction at an initial cost of $290,000. Also this week, a Forbes magazine cover featuring the Winklevoss brothers was purchased as an NFT for $333,333.

There was a certain lull in the information field of the past week. However, this may change in the next 7 days. So let’s take a look at the Bitcoin chart to see where the first cryptocurrency might go in the next 7 days: 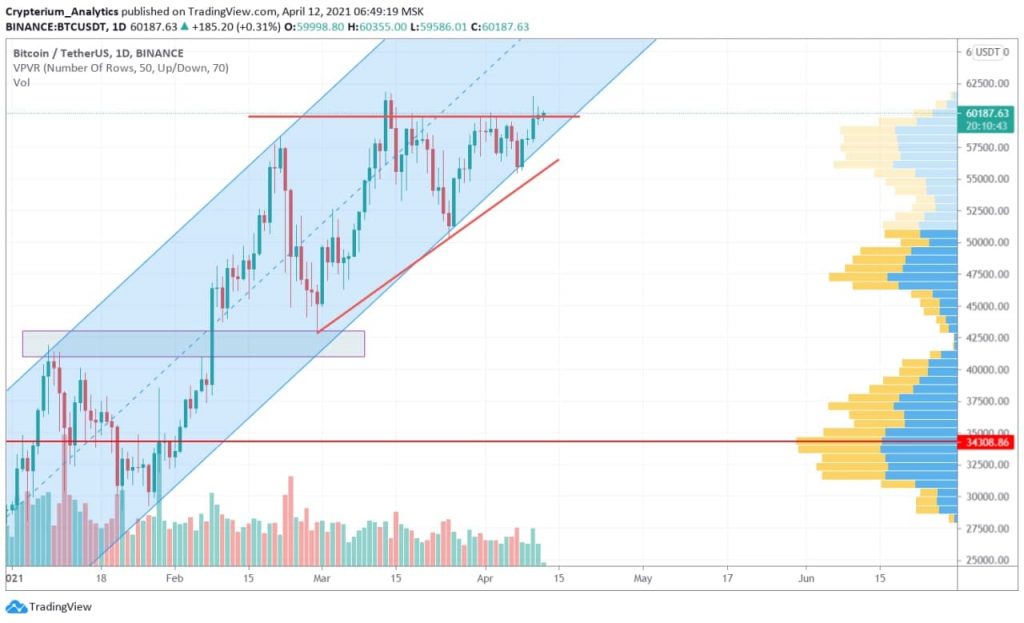 The chart is now still in an uptrend and has a strong uptrend. At the same time, an ascending triangle formed on the chart. The price has already broken through its upper border and fixed above it on the daily and weekly timeframes. If you look at the weekly timeframe, the prospect of further growth is clearly open.

Most likely, this week, we will see the long-awaited breakout and a new upward price jump. The nearest target is the $66,000 – $67,000 range. Depending on how the price behaves at this level, the further direction of the chart will become clear. Get a great opportunity to buy BTC instantly with zero fees using your bank card right now!