The most striking example was Binance Coin (BNB), the price of which increased by 100% in a week to reach $150 per coin. Especially interesting is the fact that at the time of release in ICO, this coin cost $0.1. It turns out that in just 3.5 years the coin has grown 1,500 times.

But the most notable event that affected the entire market was the report of the Tesla car company to the SEC. This document indicated that Tesla bought Bitcoin worth $1.5 billion in January 2021. This news provoked a high volume of purchases and the price of Bitcoin soared by 20% from $39,000 to $47,500. The rest of the crypto market also began to grow.

At the same time, Elon Musk continued to speak out positively about Bitcoin and other cryptocurrencies all week. Almost every day, he posted posts on Twitter, where he said that the future belongs to cryptocurrencies.

Against this background, it became known that the Mastercard company will introduce cryptocurrency into its services. First of all, stablecoins will be added. Immediately after that, there were many rumors that many large companies were ready to transfer funds to Bitcoin, including Apple, Uber and Morgan Stanley.

Another highlight was the launch of Ethereum futures on the largest commodity exchange CME. This event has waited for almost 3 months and numerous expectations of the Ethereum price growth were associated with this. However, this event had almost no effect on the price of ETH and everyone forgot about it. Ethereum stayed flat all week and did not show any strong movements.

In general, the week was very full of various rumors and events that were associated with the growth of the cryptocurrency market. There was a lot of information about new venture capital investments, partnerships, which were supposed to have a positive effect on the entire market. That said, there was a slight 2% drop in Bitcoin on Sunday evening, but this led to a significant drop in the price of altcoins, many of which fell 10% – 20%.

Let’s take a look at the Bitcoin chart to understand what to expect from it in the coming week: 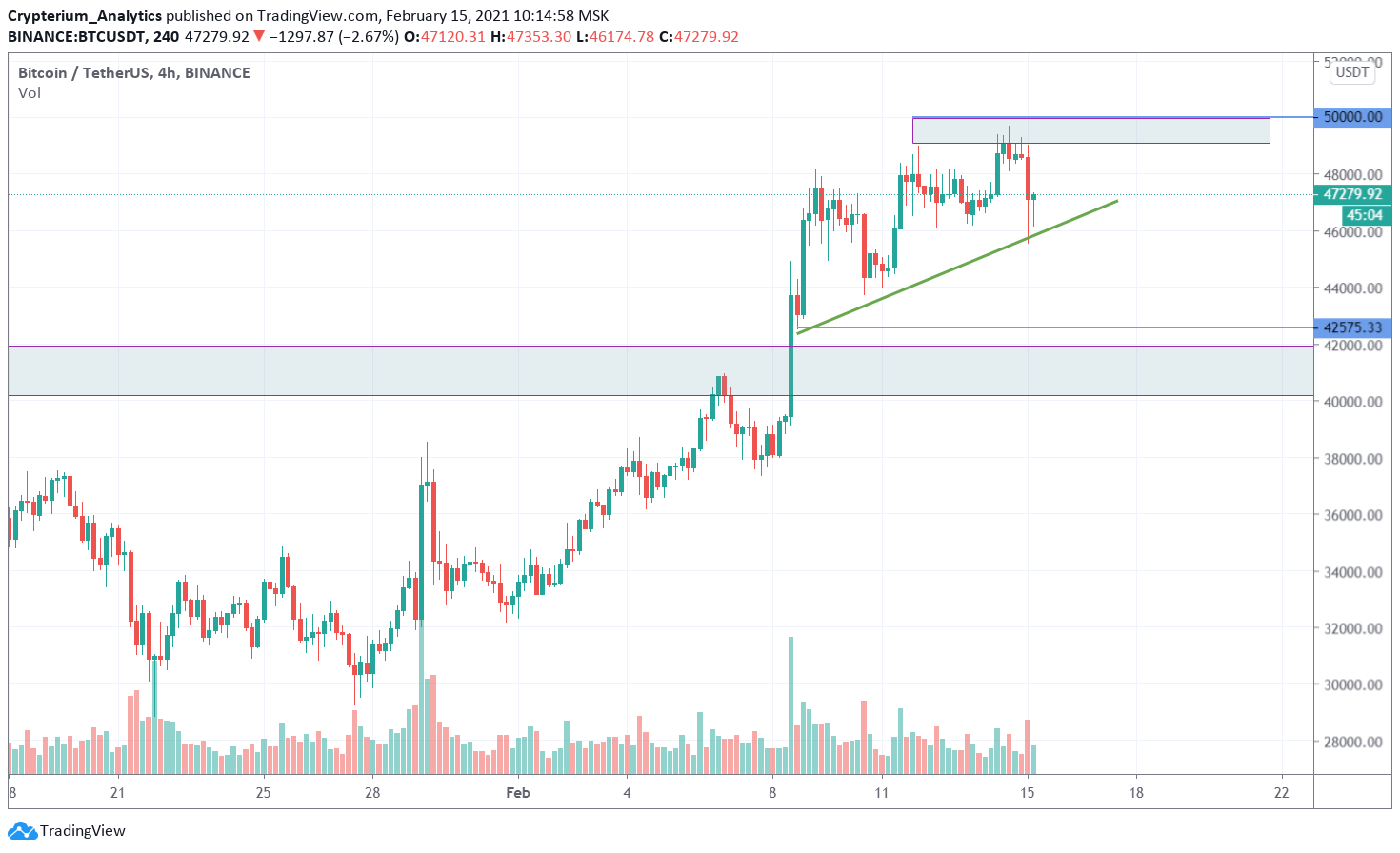 We saw a 3% decline in Bitcoin on Sunday, but this did not affect the uptrend in any way. Moreover, both global and local (green line) uptrends are still significant.

It is absolutely clear that the price is being pushed higher. We assumed that around $50,000 we could see massive sales and a fierce struggle between buyers and sellers. Actually, the slowdown of the schedule speaks of just that.

The $49,000 – $50,000 range is key at the moment. When the price consolidates above $49,000 on the 4-hour and daily timeframes, then you can safely open long positions. We will monitor events on a daily basis and will alert you if this happens.

It is possible that this week the price will be able to break through $50,000. In this case, the price can get a very strong acceleration and go up to $54,000 within a day. If you enter according to our forecast, you can earn about 10% profit. You can buy Bitcoin at the current price to increase your potential profit or make a deposit on your Crypterium savings account and double your profit in the growing market.

In the meantime, you need to closely monitor the schedule. We do not see any prerequisites for an imminent reversal and, most likely, this will last until the price breaks the key level of $50,000. This is the main psychological level, upon taking which, many new private and institutional investors will begin to come to the crypto market.