Most altcoins showed positive dynamics, but only a few of them were able to overtake Bitcoin in growth over the past week. This is especially interesting due to the fact that exactly a year ago, from March 12th to March 13rd, the Bitcoin price fell to $3,800.

During this period, many large companies appeared that actively purchased Bitcoin. The most notable of these was Microstrategy, which acquired another 262 Bitcoins this week at an average price of $57,146. Thus, 91 326 BTC are currently stored in the company’s reserves. Microstrategy actively bought Bitcoin at all drops.

It is also important to note that the US has adopted a $1.9 trillion economic bailout package. The money will be distributed to citizens and the unemployed. The last time (spring 2020), this led to an increase in the number of deposits on USA crypto exchanges. Especially clearly, this can be tracked on the Coinbase crypto exchange. Therefore, there is a high probability that the volume of investments in cryptocurrencies will increase, pushing the price of Bitcoin even higher.

By the way, this week it became known that the valuation of Coinbase on the Nasdaq exchange was $90 billion. Premarket shares closed at $350. This high valuation of the company means that its founder and CEO, Brian Armstrong, could raise over $3 billion in additional revenue.

Also, notable news was the interest of the US Central Futures Trading Commission (CFTC) in the Binance crypto exchange. They are checking for access of US citizens to crypto derivatives without the need for a license. Against this background, the native BNB token fell by 10%, but after a while, its price recovered. The exchange itself claims that it acts exclusively within the framework and has not violated the law.

This tells former US Senator Max Baucus, who joined the Binance team as a regulatory advisor this week. It is a longtime proponent of decentralized technology who has repeatedly stated that cryptocurrencies are the future.

So Bitcoin broke through $60,000. We assumed such a development of events literally on Friday and said that buying Bitcoin might be the best option at that moment. Our words fully justified themselves. Now let’s take a look at the chart to understand what to expect from Bitcoin in the coming week: 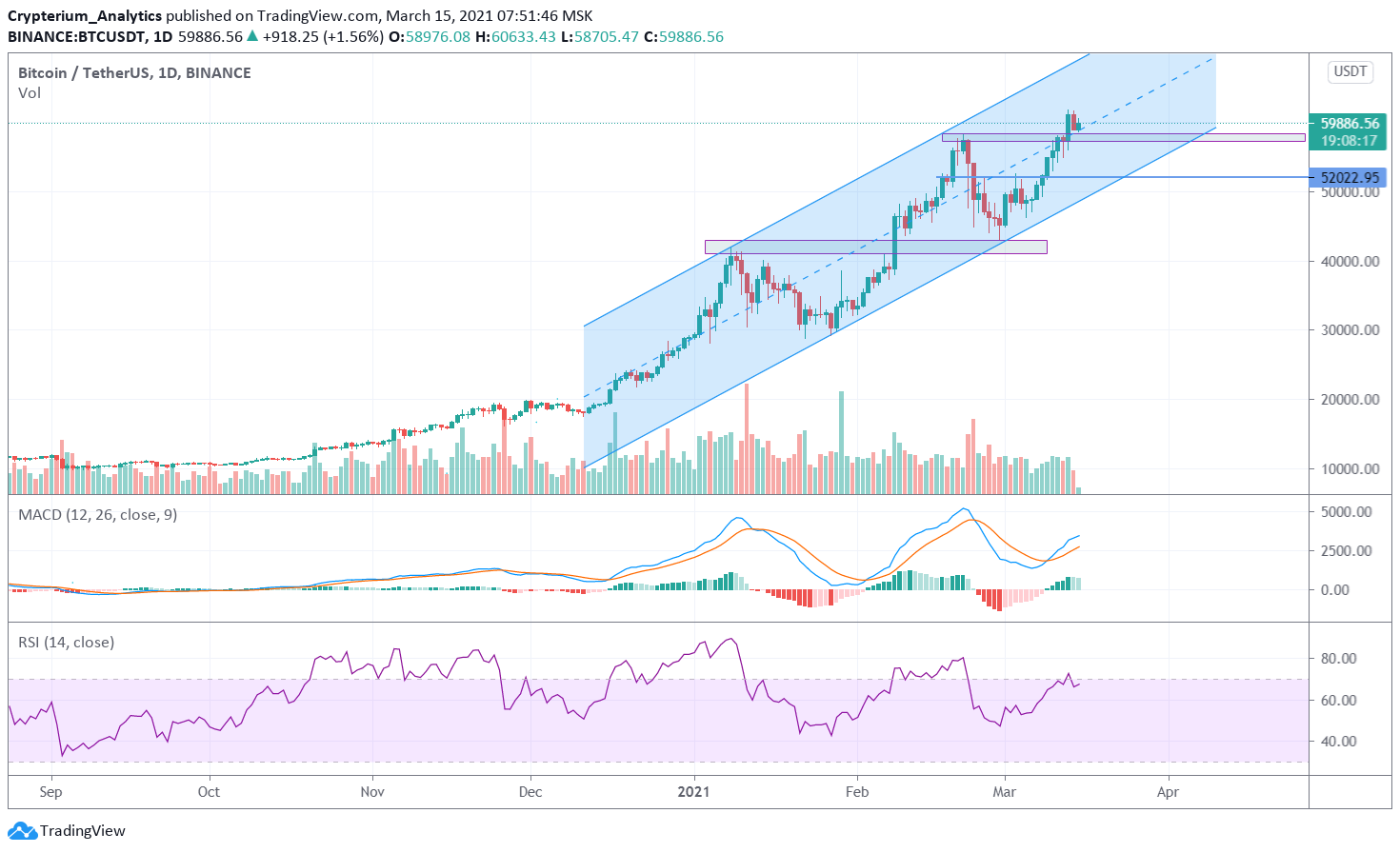 Over the weekend, the Bitcoin price was able to break through the $58,000 resistance level and entrenched above it. After that, the price started a new rally, broke through $60,000 and set a new ATH at $61,844. The next day, there was a slight decline, but the price remained above $60,000.

The chart is in a strong upward channel, which we marked in the picture above. The current growth fits perfectly into the channel structure. At first, the price reached the middle line and is now fixing above it. After that, a new movement should follow up to the upper border of the channel.

Over the past week, MACD has finally turned around and is moving up. It seems that this indicator is only gaining momentum for a new movement and we can see the 3rd peak.

The RSI also rose strongly over the past week and approached the overbought border. It was not possible to break through it the first time and the indicator rolled down a little, but it looks more like a set of forces before a new upward movement.

There are many signs that the growth should continue. Already this week we expect a strong upward price jump. Perhaps for some time, the price will be in the range of $58,000 – $62,000, gaining strength for further growth. We think that by the end of the week, the Bitcoin price could rise by 10-15% up to the $72,000 mark. And you still have a great opportunity to buy bitcoins instantly with your bank card via Crypterium Wallet.