First of all, it is worth noting that Bitcoin has set a new all-time high at $64,854. This happened against the backdrop of a long-awaited event for the crypto community – the listing of Coinbase on the Nasdaq. Against this background, the entire cryptocurrency market grew.

One early investor revealed that his profitability at Coinbase – his initial investment increased from $300,000 to $2.4 billion. It also became known that one of the most famous assets management companies on the market, Ark Invest, has acquired over 1 million shares of Coinbase.

All these events had a positive effect on the entire cryptocurrency market. Its capitalization grew by 10% in a few days and amounted to $2.236 trillion. Many large altcoins have set their all-time highs: Ethereum, Binance Coin, Cardano.

However, the most powerful growth was shown by Dogecoin, the price of which increased by almost 500% in a week: from 7 cents to 34 cents. This allowed the coin enter the Top-10 cryptocurrencies and occupied to the 6th line, displacing such large coins as Litecoin, Cardano, and Polkadot.

However, virtually the entire market dropped significantly over the weekend. This was due to two reasons. First, the hashrate in the bitcoin network dropped by 30% drop because of the collapse of coal mines in China. This led to electricity supply disruptions that affected large mining companies. The second reason is the oversaturation of the market and the weak market response to the listing of Coinbase shares. We saw a similar situation in September 2019, when the launch of Bakkt did not live up to the expectations of the crypto community.

By the way, the largest mining company in the world, Bitmain, has announced a new ASIC miner for Ethereum mining. A model called AntMiner E9 will produce a capacity of about 1500 MH/s, which makes this device the best for mining the second-largest cryptocurrency by capitalization.

It is unclear how much the demand for this device will be because Ethereum is about to enter the second phase. The next step for this was the Berlin hard fork, carried out in the main network. During the implementation of this update, there was a desynchronization of nodes for some clients and this led to problems in the functioning of the Ethereum blockchain.

Many crypto companies at that point limited operations regarding the deposit and withdraw of ETH and ERC-20 tokens. The next day, the developers presented a new solution and were able to fix the problem, so now Ethereum is working as usual.

The week was very busy and the markets behaved in different directions. This is what we warned you about last time. Now let’s take a look at the chart of the first cryptocurrency to understand in which direction the price will move next: 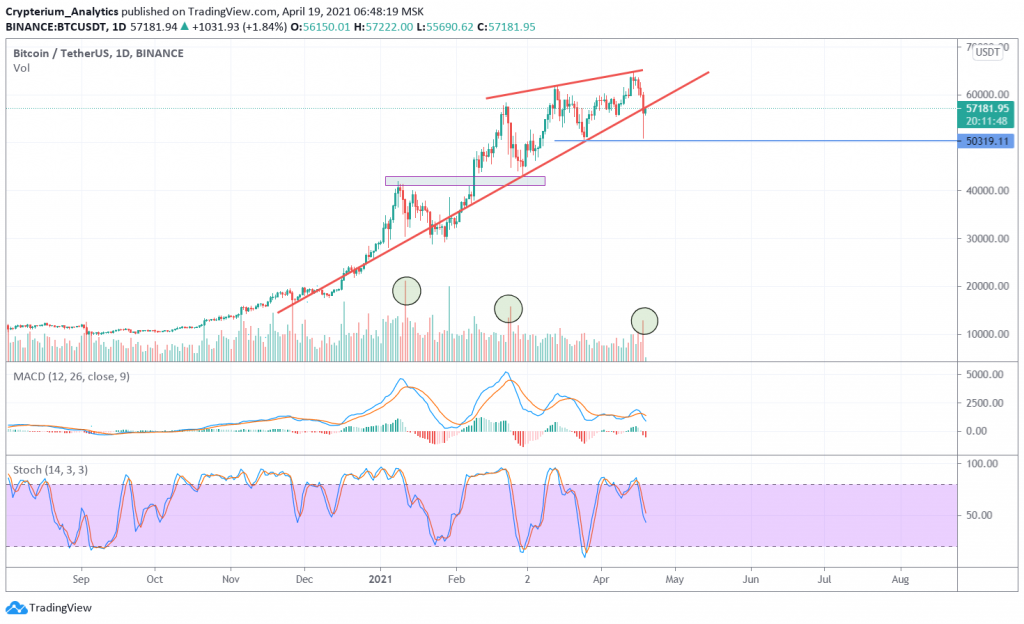 In the course of this collapse, about a million market participants lost their positions, and the volume of liquidations amounted to $9.3 billion. This is the absolute maximum for the entire existence of the crypto industry and this liquidation exceeds the previous historical maximum by almost 3 times.

It should be noted, however, that the trading volume is not very high. To do this, it is enough to compare the previous falls that occurred on January 11th and February 23rd of the current year. In those days, sales were significantly higher and indicated further declines. It is possible that yesterday’s falling is just the beginning.

On the 4-hour timeframe, the price has already returned to the trend line and is trying to break it from top to bottom. If it turns out to gain a foothold above it, then the price can quickly reverse and start new growth.

However, at the current moment, the probabilities of falling and rising are the same. Now, it is quite possible that the price may again drop to the $50,000 level or move sideways until the end of the month. Trading in such situations is extremely risky.

Based on this, the best option for events at the moment is to wait for several days and put cryptocurrency into a savings account for an additional income. After that, the overall picture becomes clearer and where the chart can move.