In the middle of last week, it became known that one of the largest US banks, Morgan Stanley, will open access to cryptocurrencies for its clients. However, only accredited investors with a capital of at least $2 million can apply for this. Investment companies that have at least $5 million in bank accounts will also get access. All of this means that the entry of institutions into Bitcoin will only increase.

It was revealed this week that Coinbase will list 115 million shares on the Nasdaq exchange. However, the placement deadline was postponed from March to April 2021. This may be because Coinbase must pay a fine in favor of the SEC for $6.5 million. This resolution was also issued last week and is because in 2014-2017, the exchange was engaged in falsification of trading volumes.

Not without new news in the NFT industry. So, Elon Musk once again declared himself – he put up for sale a song about NFT in the form of NFT. Many buyers were willing to buy this token for millions of dollars. Elon Musk himself offered to buy this song for 420 million Dogecoins. However, a little later, the author removed the NFT from the sale, explaining that he did not want to cash in on it, but only drew public attention to the NFT.

Another piece of news about NFT is related to the OpenSea marketplace. This week, this company was able to attract investments of $23 million. This round of investments was led by a large investment fund, Andreessen Horowitz. The company uses the money received to scale up its activities.

Quite a lot of positive news for the industry came out this week. Let’s see how this affected the Bitcoin chart and what to expect from the first cryptocurrency in the next 7 days. 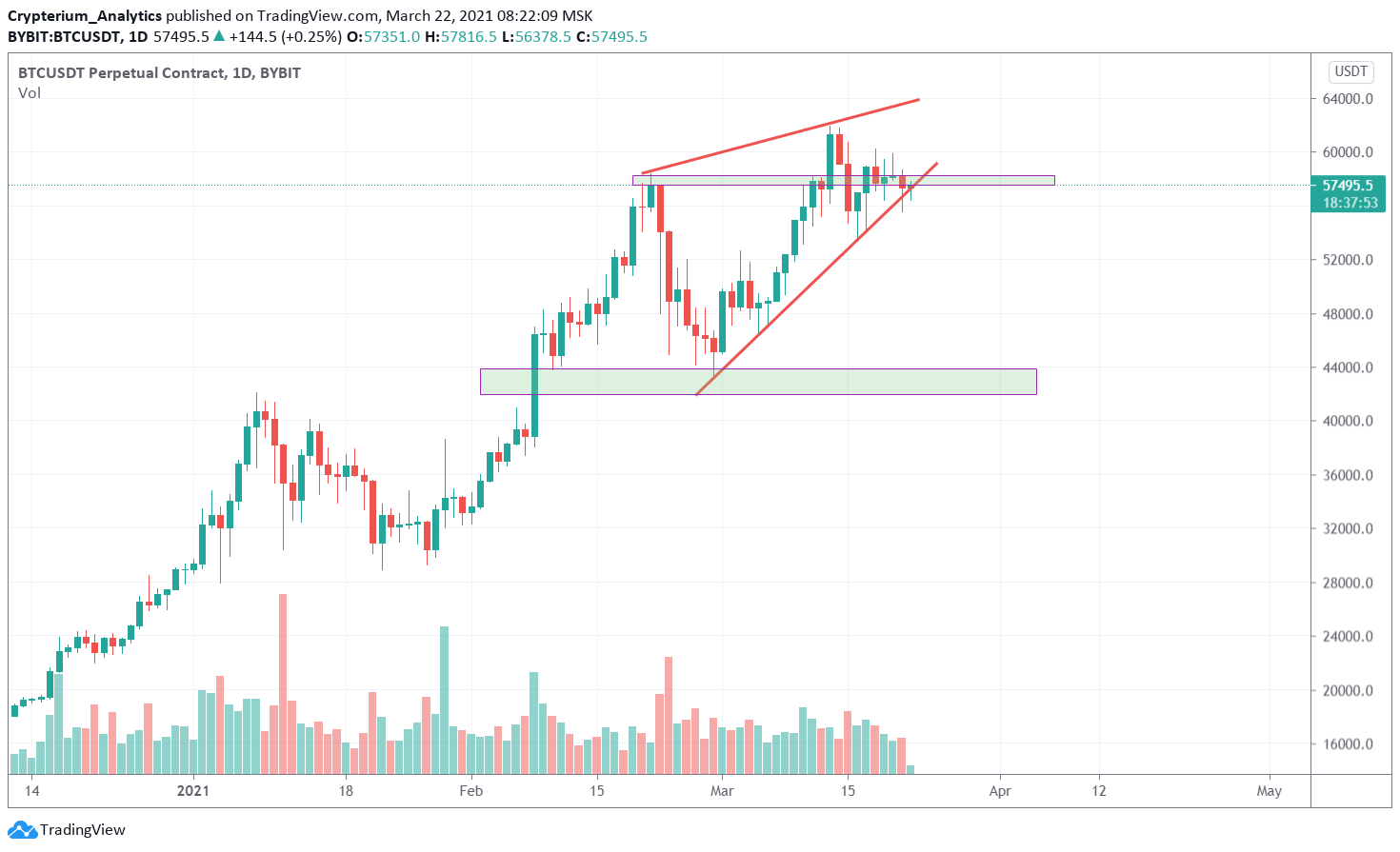 In the first half of last week, the price dropped from $61,000 to $53,000. After that, the chart again reached $60,000 but failed to gain a foothold there and we saw a small pullback to the $57,000 – $58,000 range. Throughout the second half of last week, the price was in this area. This structure of the chart indicates that market participants are gaining positions.

This whole situation is complicated by constantly decreasing trading volumes. This indicates that traders and investors are waiting for a new jump in price, which could be observed on January 11st and 29th and on February 23rd. For almost a month now, we have not seen significant surges in the market. And with all this, the chart has grown by more than 50%.

Most likely, this indicates that large players are entering the market, who are gradually gaining a position and do not want to provoke a rise of Bitcoin price. Sooner or later, this leads to the growth of the first cryptocurrency.

The key levels are $57,000 and $58,250. If the price falls below $57,000 and consolidates there on the daily timeframe, we can see a drop of $49,000. If the price consolidates above $58,250 on the daily timeframe, we will see a new chart attempts to set ATH with a high degree of probability. According to the current chart structure, it may rise to $64,000 inside the rising wedge, after which the price may fall again. Don’t wait for new highs, buy bitcoin with almost zero fees to make an additional profit within some days.

The accumulation of positions is always uncertain for the chart, therefore it is necessary to carefully monitor the current state of the market. To always be aware of possible events, read our daily analytics.