The United Nations estimates that one in nine people worldwide are currently supported by remittance money. That’s about 800 million people receiving money transfers on a monthly or bi-monthly basis with an average transfer size of $200.

Finding the best way to send money abroad can be challenging. Despite living in the era of digitalization, the available options are still quite limited.

Due to strong regulations and a large number of intermediaries, using your bank to transfer money internationally can turn into an expensive and time consuming experience. That explains why people are increasingly opting for alternative services to send money abroad such as Crypterium, TransferWise and Western Union.

When trying to understand which service works best for you, it’s important you take a close look at the exchange rates, service fees, execution time and country availability. A growing number of people are turning to blockchain-based solutions like Crypterium because of their ability to offer instant, secure and commission-free international money transfers.

However, if you’re still thinking of making a money transfer with Western Union, we’ve compiled all you need to know about it before getting started.

Western Union is one of the biggest and oldest money transfer services in the world. This American company was founded in 1851 under the name New York and Mississippi Valley Printing Telegraph Company. Since then, the company has been developing its product range to allow people send and receive money across the world.

The costs of a money transfer with Western Union varies depending on several factors, including where you’re sending money from and to, how the transfer is funded, and how the recipient will receive the money (bank account, card or cash) 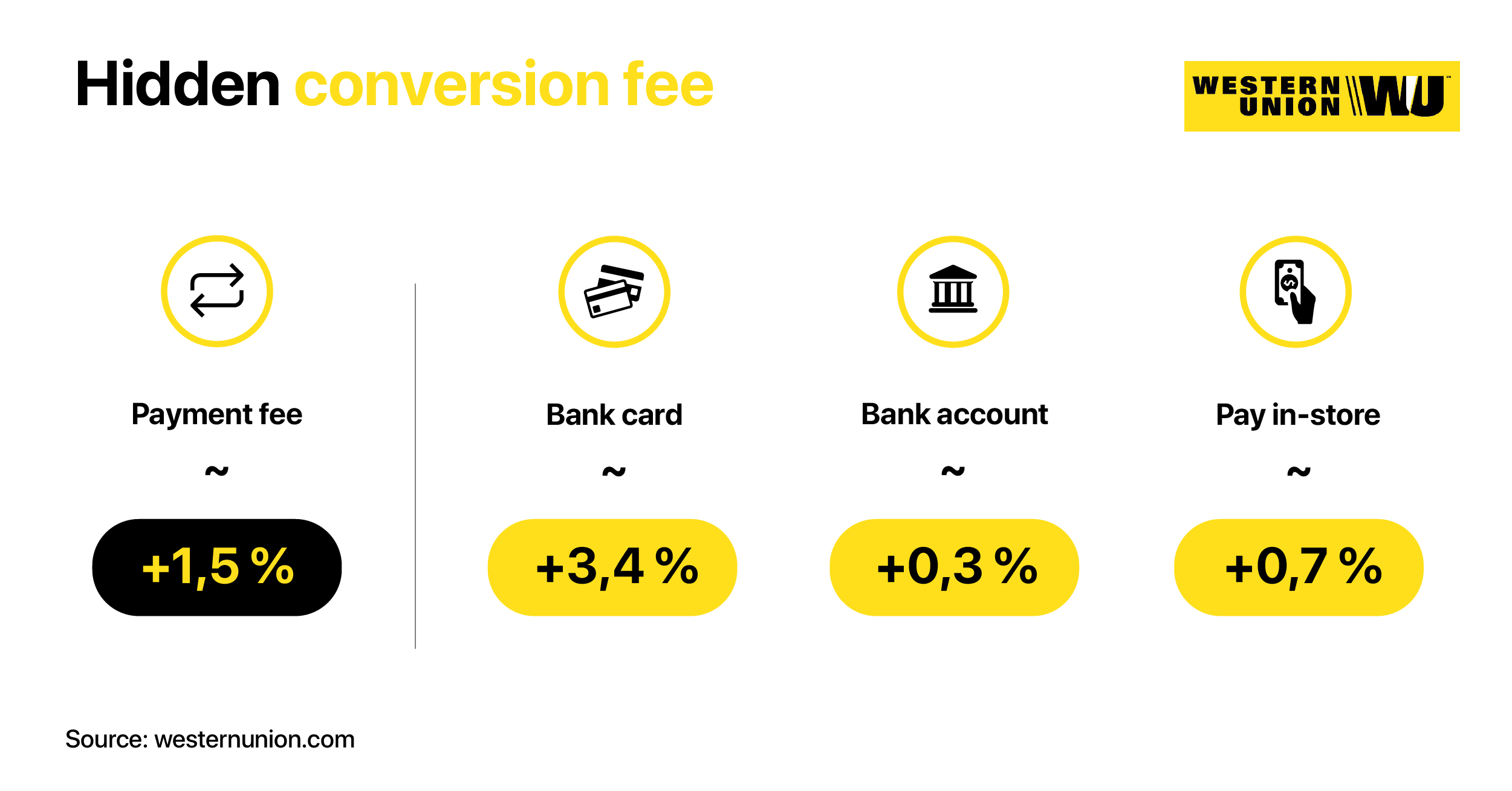 That is why the company adds the following disclaimer in the footnotes of each transaction:

“Western Union also makes money from currency exchange. When choosing a money transmitter, carefully compare both transfer fees and exchange rates. Fees, foreign exchange rates and taxes may vary by brand, channel, and location based on a number of factors.”

If you compare the mid-market with the one you see on Google, you’ll quickly notice the difference. But Western Union isn’t the only company profiting from exchange rates. While this isn’t a fair nor transparent practice, it is widely spread in the remittance industry. 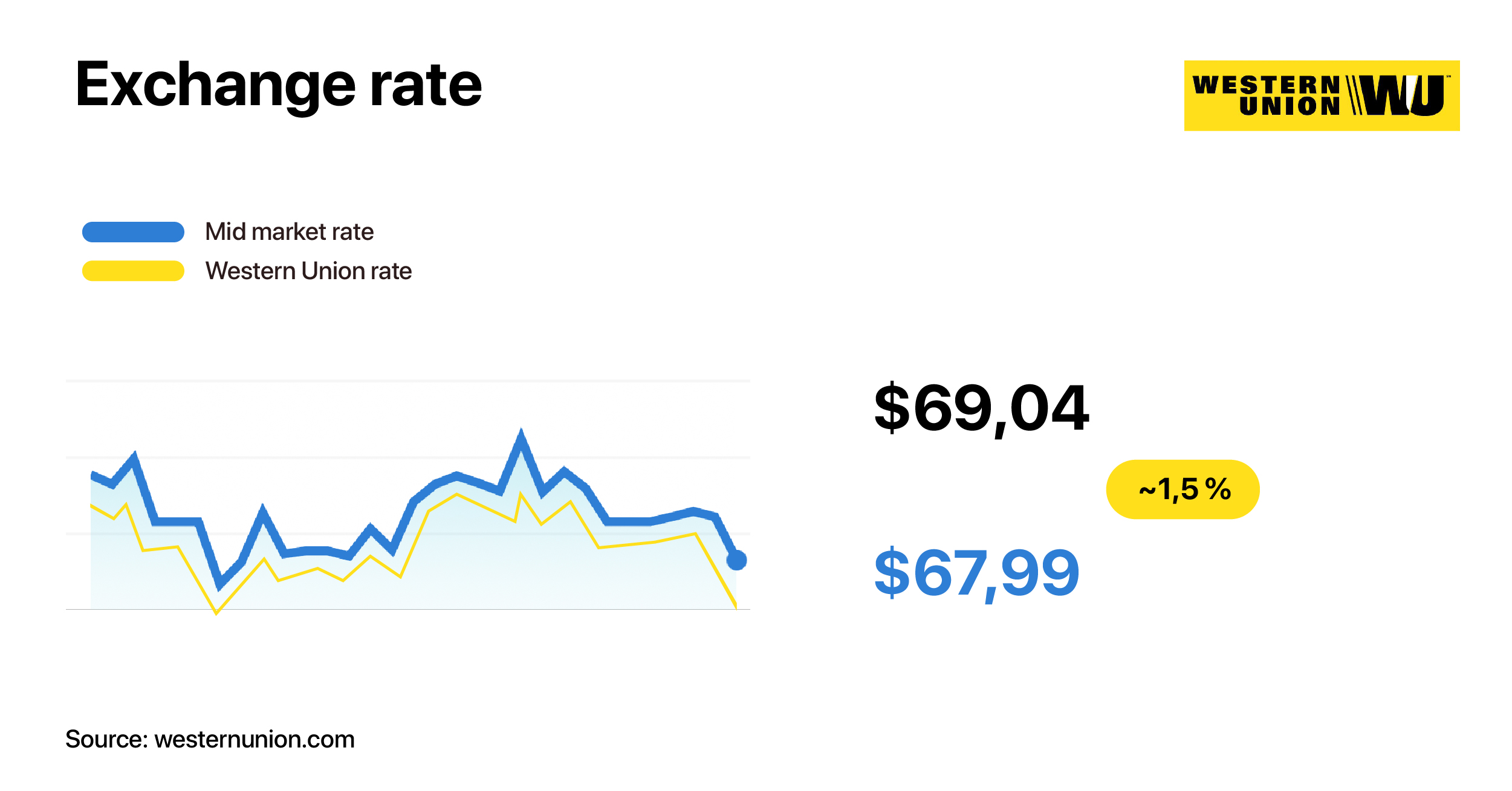 Blockchain technology allows digital currencies to move seamlessly from A to B at barely no costs. Services like Crypterium always display an estimated operation time and fee (if applied) before you send money. Moreover, the multi-currency nature of the Crypterium Wallet makes it easier for customers to transfer different currencies without worrying of filthy exchange rates.

Western Union might be one of the popular remittance services in the market, but it surely isn’t the most convenient one. Processing an internationally transfer with Western Union would take anything from 5 to 10 different steps depending on the specifics of your transactions.

We’ve prepared a flow based on the following scenario: an online transfer using Western Union official website from the United States to India for $1,000.

For a long time, Western Union has been targeted by fraudsters and scammers. Make sure you are visiting the official website of Western Union. Also, this service is not meant to be used for shopping, so it does not offer the same levels of buyer or seller protection.

It’s now time to enter the destination country and amount of your transaction. Keep in mind that Western Union will automatically convert the funds to local currency. Depending on destination, different transfer limits apply. In this particular case, you can send up to $50,000 at once.

There are three possible ways to receive money with Western Union:

These options to collect the funds are not available in all locations. Following our example, only cash pick and bank account are enabled in India. If the recipient visits the Western Union office, he or she will need to bring a valid government-issued ID to present at the desk.

If you’re sending money to a bank account, you’ll have to introduce the full details of their account, including a SWIFT code and IBAN depending on location.

This is probably the most important part of your online transfer as it will likely define the total amount of fees you’ll have to pay at the end.

Most of the time, you have several options to deposit funds, including cash deposits in a Western Union branch, bank transfers, in-store payments, wire transfers, credit and debit cards. Funding the transfer with your bank account is the cheapest option in this case: only $2.99. But the transfer will take not less than 4 days to arrive. If you’d like funds to arrive faster, you could opt for a card payment. Of course, that method comes along with a $34 commission. Ouch.

Step 5: Process the transfer and trace it

Since most of Western Union transfer aren’t instant, you’ll receive a MTCN reference number to track the transfer once executed. You can track your transfer online or at any WU branch. If the recipient is intending to get the funds at a local Western Union office, the MTCN will have to be presented along with a valid government-issued ID.

Looking for a fast and affordable way to send money abroad?

Western Union and all other traditional remittance services still rely on the banking system to perform financial operations. Blockchain-based services like Crypterium allow you to send money internationally in seconds at a fraction of what you would typically pay. Whether you are sending money to India or transferring to Ghana, all you need is the recipient #39;s phone number. 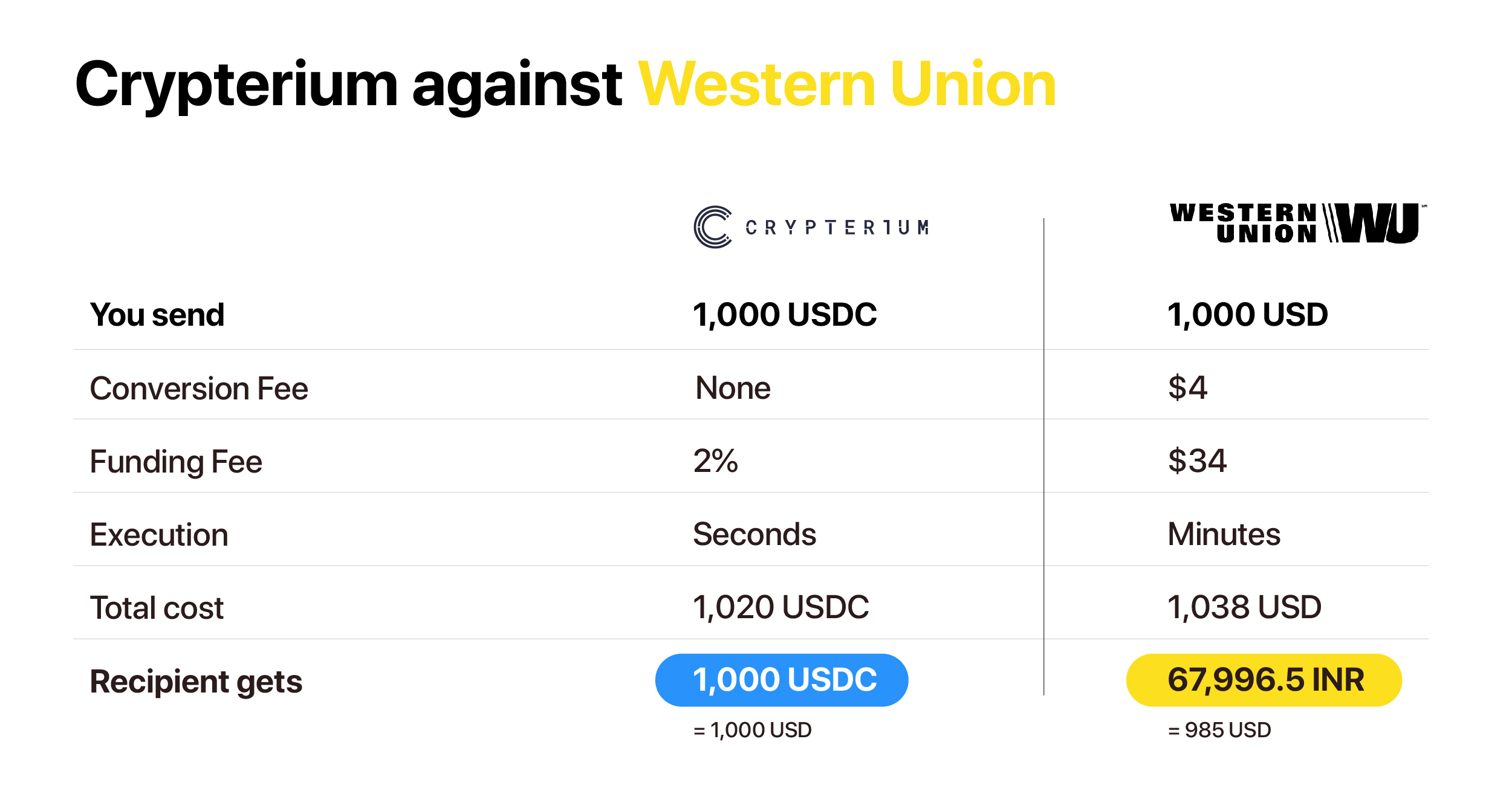 Sending money internationally with Western Union isn’t too hard, but it’s expensive. If you send money on a regular basis, it’s well worth checking out other existing alternatives like Crypterium that might help you and your friends or family save money.