The trading volume dropped significantly, falling from $28 billion to $19 billion per day. This indicates the manipulative nature of the price movement.

This was most likely due to the performances of Elon Musk, Jack Dorsey, and Cathie Wood on the program about Bitcoin. All three participants spoke positively about the first cryptocurrency, which led to a rise in price by 11% per day from $29,500 to $32,800.

The stagnation of the price of the first cryptocurrency turned out to be favorable for the rest of the market – many altcoins showed a slight increase in the average of 5%. This has led to a decline in the dominance of the Bitcoin market.

Let’s see if there were any significant changes on the Bitcoin chart after that and if we should wait for a reversal now: 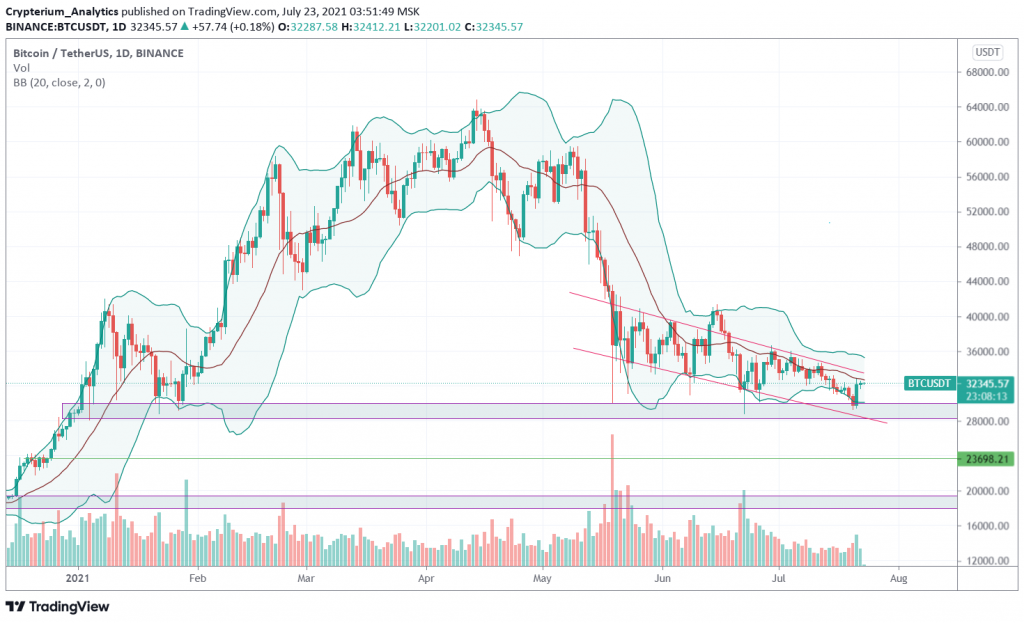 As you can see from the chart, there were no significant changes. Bitcoin has approached the upper border of the descending channel but has not yet touched it. To do this, it needs to grow by another 3% to $33,400.

It is important to pay attention to trading volumes. Even the small surge that occurred yesterday is well below average compared to spring and winter. All this points to the weakness of buyers and the lack of liquidity. That is why the chart has been in a downtrend for 2 months already.

In addition, the price has already tested the middle line of the Bollinger indicator three times but was unable to break through it and gain a foothold higher. In addition, the shape of yesterday’s Japanese candlestick is alarming, as it usually indicates a possible downward reversal.

Thus, at the moment, there are no significant changes on the Bitcoin chart, indicating a reversal of the downtrend. Many signs point to continued slow price declines. Recall that the key level is at $28,800. If the chart drops below, it will cause a cascade triggering of stop-losses and the price of the first cryptocurrency can quickly drop by 10% – 15% up to the level of $26,000.