The Bitcoin price has dropped by 4% over the past 24 hours and is now traded around the $38,000 mark. Thus, the first cryptocurrency dropped by 10% in 4 days and this led to a decline in the entire cryptocurrency market. At the same time, BTC trading volumes began to decrease again and amounted to $25 billion in the last 24 hours.

Let’s take a look at the chart of the first cryptocurrency to see how long this fall could last: 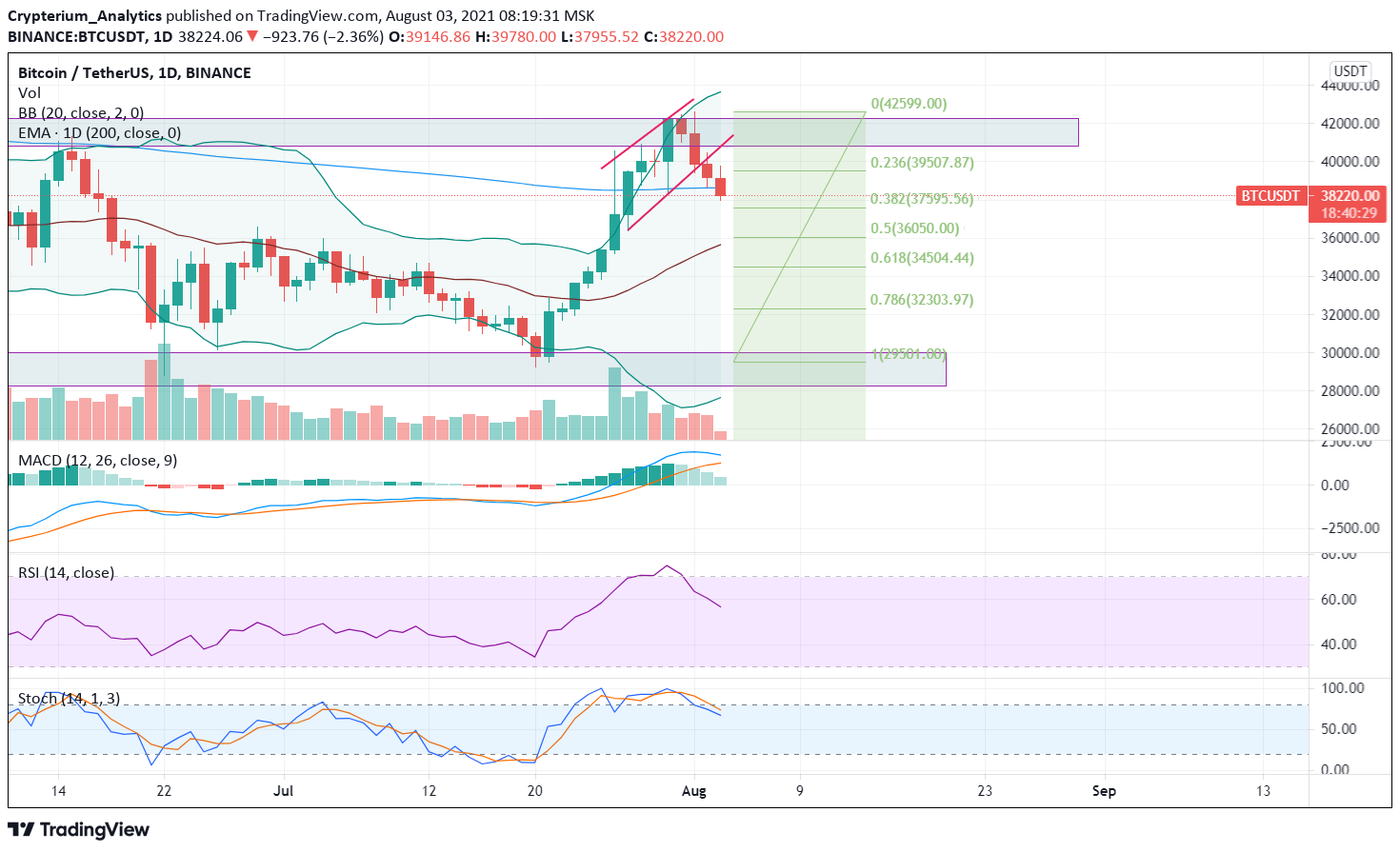 It has now become obvious that the chart has dropped out of the ascending channel, which was formed at the end of July. The price consolidated below the lower border yesterday and this became a strong negative signal for the Bitcoin price. The current candlestick formation indicates a continuation of the fall, which can only intensify. It has now become clear that buyers are not ready to redeem this asset in the range of $38,000 – $42,000 and therefore the decline will continue.

In addition, the price has returned to the 200-day moving average and is trying to gain a foothold below it. This is also a bad sign indicating a continuation of the downtrend.

A trend reversal can also be noted on indicators. Stochastic has been in the overbought zone for a long time and its downward reversal looks logical. But the RSI turned around very quickly, which speaks of the strength of the sellers. Both of these indicators indicate further price declines.

To understand to what level the chart can go down, we stretched the Fibonacci grid. The nearest mark is at the level of $37,600, but this level has not previously shown significant trades, so it is not worth talking about it. More logical is the Fibonacci 0.5 mark, which is located at the $36,000 level. This level was previously a strong support and resistance level and this is where the price will tend to.

We advise taking a look at the Bollinger Bands indicator as well. The price moved along the upper band previously. It has now turned down and goes to the middle line, which is just around the $36,000 mark. It makes us more confident that this level is key for Bitcoin.

A slight correction is ripe in the market after a 30% increase and we talked about it. It is necessary to wait for a new round of decline and signs of a reversal now. After that, it will be possible to talk about an uptrend again. Therefore, we will carefully watch and tell you what will happen at the $36,000 level.

If you are more interested in altcoins, then we strongly advise you to put the chances on your side with daily AI-powered crypto price predictions. Reduce market noise and identify attractive opportunities for over 150 digital currencies with an accuracy rate of above 80%.