Bitcoin has for long retained its position as the most dominantcryptocurrencyin terms of capital inflow powered by factors like being the flagship digital asset. However, its dominance continues to drop as the asset battles one of the longest crypto winters.

In particular, as of October 6, Bitcoin market dominance hit the lowest point in four years at 40%, with a capitalization of $387.85 billion. Ethereumranked second with a market capitalization of $166.61 billion, accounting for a dominance of 17.3%, according to CoinMarketCap data.

It is worth noting that Bitcoin’s falling market share aligns with the asset’s sustained volatility partly triggered by prevailing macroeconomic conditions like high inflation and interest rate hikes.

In this case, the sliding share has several implications, like putting into question the asset’s ability to act as a store of value and hedge against inflation.

At the same time, the market cap movement partly indicates that interest in Bitcoin from retail investors appears to be low due to the loss-making aspect amid depressed activity from institutional investors. Notably, besides the volatility, the regulatory aspect is keeping institutions away at the moment.

Historically, Bitcoin’s drop in market dominance has impacted the general market helping dictate the next price action of other assets like altcoins. In most cases, capital exiting the Bitcoin space is channeled to altcoins positioning them for a rally. However, that is not the case since altcoins are still trading in the red zone.

In periods of market downturns, altcoins appear to be more attractive investments for those looking for quick gains.

Despite the shift in market dominance, Bitcoin has indicated signs of recovery as the asset attempts to exit the bear market. By press time, Bitcoin was trading at $20,130, extending its consolidation around the level.

Furthermore, a section of the market has suggested that Ethereum stands a chance to flip Bitcoin in market capitalization. Ethereum boasts of more use cases powering elements such as decentralized finance (DeFi).

It is worth noting that the possibility has accelerated following Ethereum’s shift to Proof-of-Stake (PoS) protocol after the Merge upgrade. The upgrade is touted to make Ethereum a deflationary and environmentally friendly asset, a factor likely to attract more institutional capital.

Finally, the Bitcoin market’s dominance will likely slide in the future as more assets with strong cases enter the space. For instance, Bitcoin is among the assets with the least ongoing network activity, elements likely to impact capital inflow.

Ethereumremained well bid above the $1,3330 level. There was a break above a major bearish trend line with resistance near $1,355 on the hourly chart of ETH/USD.A high was formed near $1,385 and the price is now consolidating gains. Ether price is trading above $1,350 and the 100 hourly simple moving average.

On the upside, ETH is facing resistance near the $1,385 zone. If Ethereum fails to climb above the $1,400 resistance, it could start a downside correction. An initial support on the downside is near the $1,365 level. 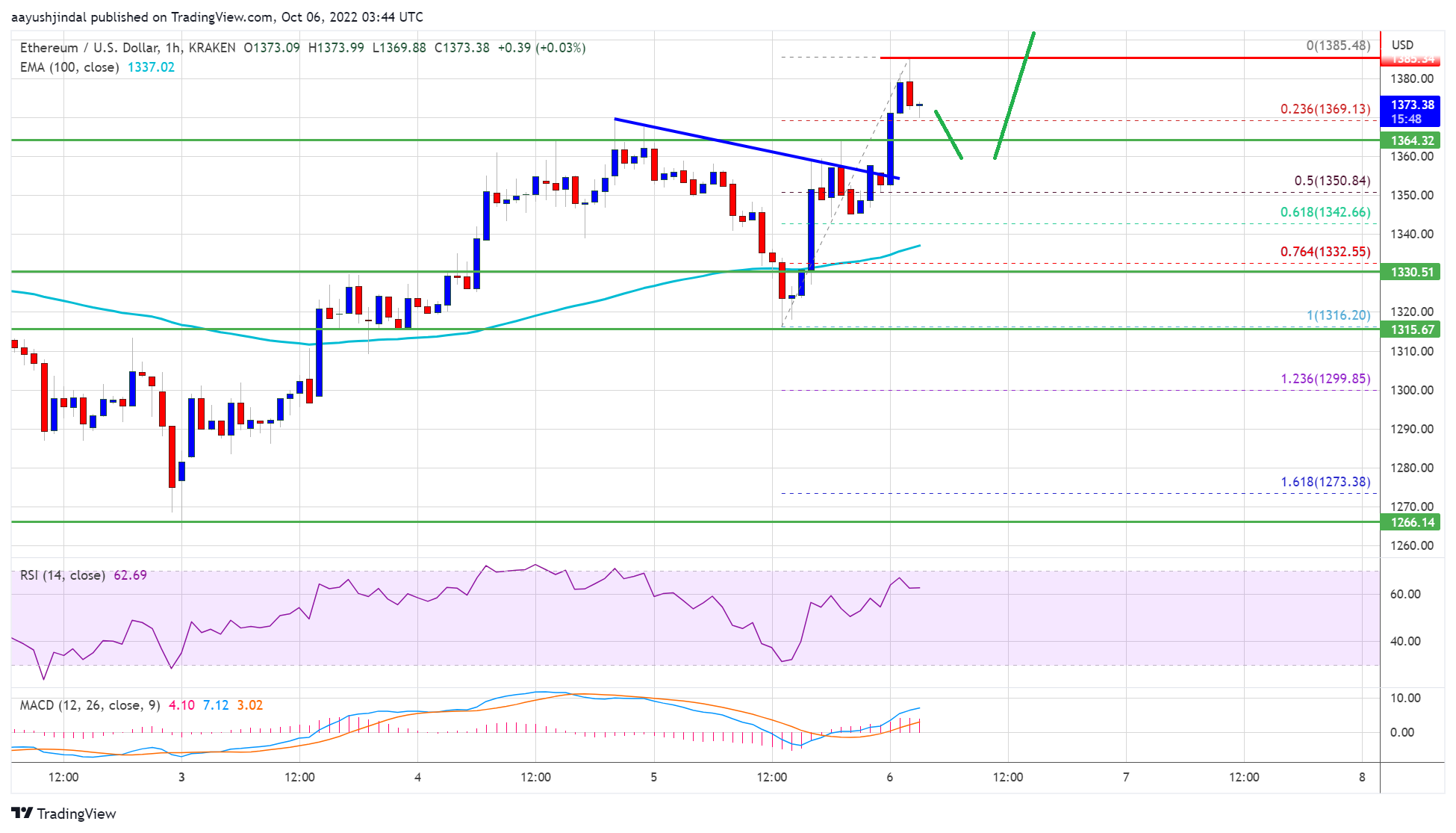 Hourly MACD is gaining momentum in the bullish zone

Hourly RSI is well above 50