This happened primarily due to important news from Binance. So, this company announced that it is creating a special fund in the amount of $1 billion, which will be directed to the development of the Binance Smart Chain ecosystem. As a result, BNB grew by 10% and many projects from BSC also showed significant growth from 10% to 20%.

Let’s take a look at the BNB chart, which is one of the top three cryptocurrencies in terms of capitalization: 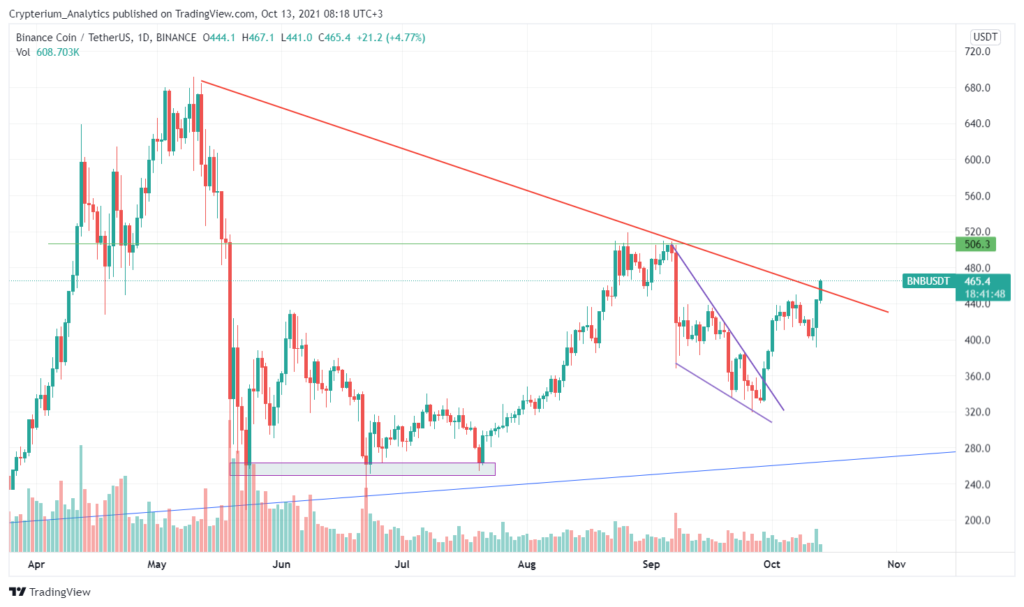 Since the beginning of October, BNB has grown by 40% from $332 to $465 at the moment. Yesterday’s Binance announcement resulted in a sharp rally that overshadowed last week’s correction. Moreover, the chart broke up the downtrend line formed since May of the current year.

Throughout September, the “Falling Wedge” pattern was formed on the chart, which has not yet fully worked itself out. Judging by the angle of fall of this figure, the minimum target, to which the price can go, is the level at around $500.

Most likely, the price will come to this zone during the current week. Most likely, it is here that we will see the price stop and the chart will not be able to take this level the first time. The $500 mark is an important psychological level near which most market participants will sell their positions. We have already observed such a situation at the end of August and, most likely, it could happen again.

In addition, you need to understand that the fund created for BSC will be of key importance for the price of BNB. Many projects will switch to Binance Smart Chain and use the native token of this blockchain – BNB. This means that the use of this coin will increase significantly, which will spur demand for it. As a result, this will lead to a new round of BNB price increases.

Considering the range with which BSC and BNB are growing, the next mark to which BNB can raise will be $1,000 per coin. It is unlikely that this will happen quickly, but within 3-6 months this option looks acceptable.