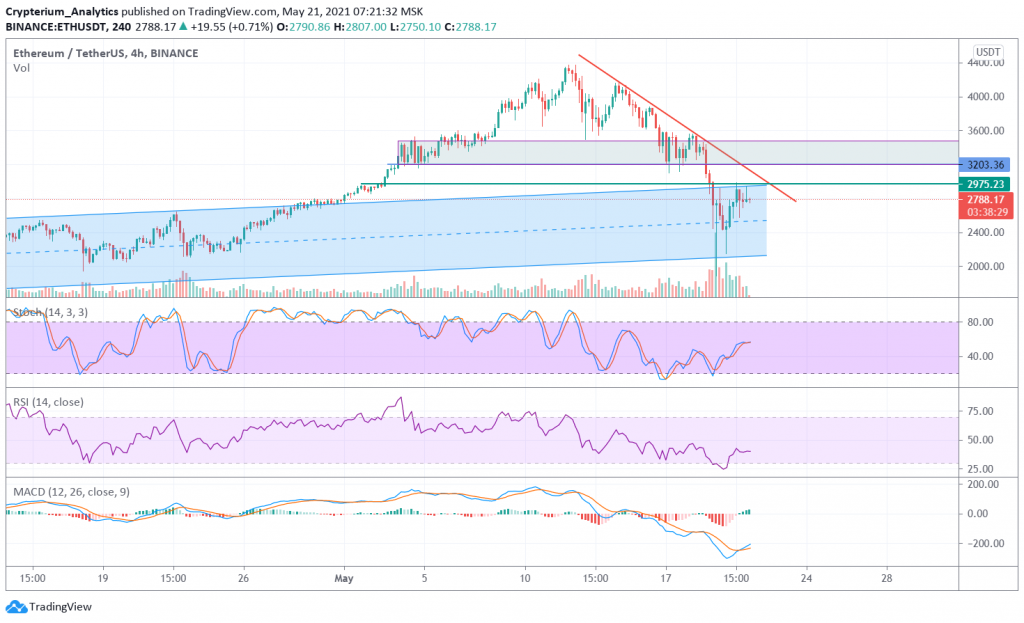 The chart has already grown strongly after the recent drop. During it, $2 billion worth of positions in the Ethereum market were liquidated. This is an absolute maximum for the entire existence of margin trading at ETH.

Nevertheless, many buyers decided to take advantage of this sell-off and bought a lot of Ethereum in the fall. This can be seen from the significantly increased trading volume on the chart. The rebound occurred literally within 20 minutes. This points to the fact that falling prices were very attractive to many large market participants.

The indicators eased significantly during this falling, and this can be seen on both the 4-hour and daily timeframes. If on the daily timeframe, signs of a reversal appeared only today, then on the 4-hour timeframe, the trend has definitely changed to an all-moving one.

Stochastic managed to rebound from the bottom the second time, approached the middle line and is confidently moving up. RSI fell so low for the first time in 3 months, the last time it happened when ETH fell by 40%. Now, this oscillator has come out of the oversold area and is showing a confident upward trend. MACD has collapsed extremely strongly. This indicator has never had such a powerful fall. The younger moving average line has confidently crossed the higher moving average line, which indicates a reversal of the chart.

All of this points to the fact that Ethereum’s growth will continue in the near future. An important resistance level now is the $2,975 – $3,000 range. This is where the upper border of the old ascending channel, the downtrend and the last resistance level converge, after which Ethereum rose to almost $4,500. In the near future, the price will come to this zone. After fixing inside it, the ETH chart may rise sharply to the range of $3,200 – $3,500. This is the time to buy back and enjoy the next movement.