Crypto Daily: Bitcoin Has Been Growing For Three Days We predicted this situation a few days ago and it came true. Now there are some changes on the chart that need to be taken into account. So let’s take a look at Bitcoin: 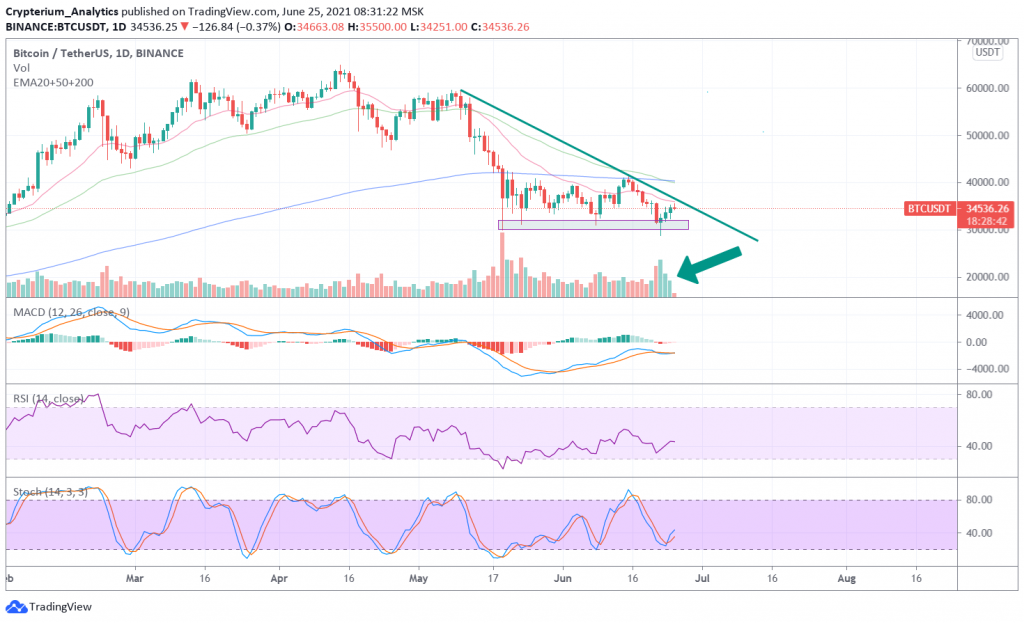 Over the past 3 days, Bitcoin has been able to interrupt the downtrend that has formed in the last 10 days. During this time, the price of bitcoin fell from $41,000 to $28,800. Within 3 days, the price of the first cryptocurrency grew progressively and was able to gain a foothold above the downtrend.

At the same time, the chart is as close as possible to the more global downtrend formed in early May. At the moment it is $36,500. It is to this price that the rise in the price of Bitcoin can last.

In the meantime, the “cross of death” pattern has formed on the chart, which we have been warning about recently. The lower moving average EMA50 crossed the higher moving average line EMA200. As we said earlier, this is a signal for a medium-term decline in the price of an asset.

Technical indicators and oscillators have also started to turn upward, including RSI, Stochastic and MACD. However, none of them has a strong uptrend. The MACD looks good, which almost recovered from the crashes in May, but this is not enough to be confident in the further growth of the first cryptocurrency.

Separately, it should be said that trading volumes fell during the growth in the last 3 days. It also plays against Bitcoin. Market participants are not eager to buy Bitcoin, as they are not sure about its future prospects.

Our team has a similar position. Bitcoin is still sandwiched between $30,000 and $40,000, meaning it has moved sideways. As you know, trading sideways movements is a very dangerous business.

However, we will think about buying in the event that Bitcoin can break through the downtrend and gain a foothold above it. Now this level is in the $36,500 – $37,000 range. However, this is also a rather risky strategy. That is why we prefer to wait out this period of low liquidity in the market.