The situation is similar in the altcoin market. Yesterday many of them fell by 10% – 15%, but at the same time over the past 7 days, their price has shown an increase. This indicates a correction in growth, which has been quite significant in recent days.

Let’s take another look at the Bitcoin chart and try to figure out where its price will go next: 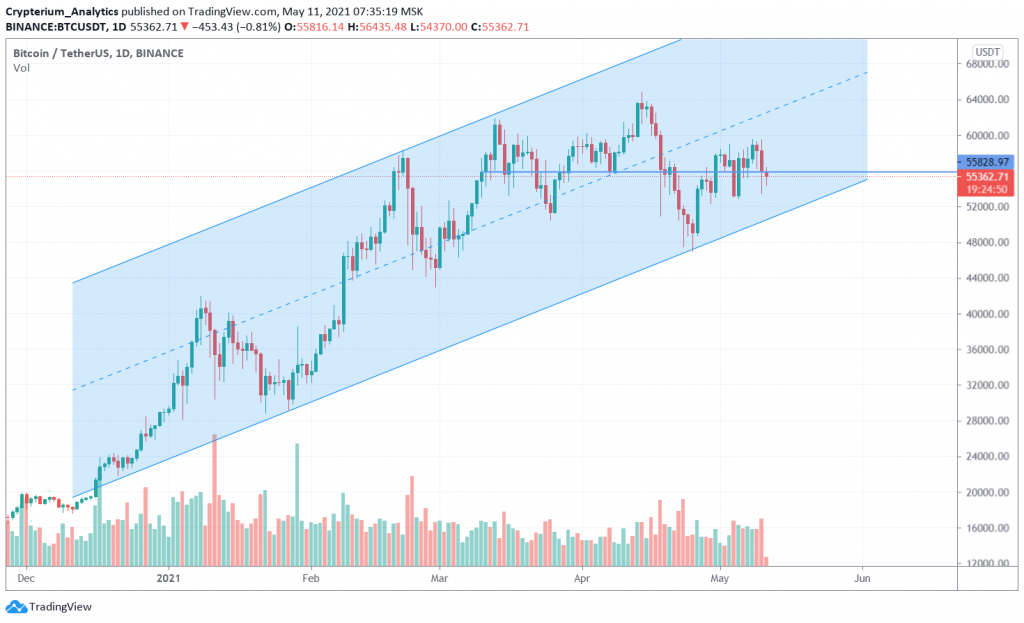 On the daily timeframe, everything remained practically unchanged. In the last 2 weeks, the price has been moving in different directions, which allows us to speak of a transition to a flat. $56,000 remains the key level.

Yesterday’s fall allowed us to highlight an important support level at $53,000. It is to this zone that the price has already descended 3 times, and each time buyers confidently pushed the price back up. The accumulation phase continues.

During yesterday’s fall, we saw another major liquidation in the market in the amount of almost one and a half billion dollars. The liquidation occurred primarily on long traders, with the largest volume of liquidated positions recorded on Huobi.

Additionally, Bitcoin dominance is 45% and continues to decline significantly. Such low levels could be observed in June 2018 or almost 3 years ago.

Here we see the development of the “head and shoulders” pattern. The minimum mark, to which dominance could have dropped, in this case, is just 45%. However, there are no signs of a reversal on the chart so far and it is quite possible that it may drop up to 40%.

At the same time, all oscillators indicate the fact that the chart is very oversold for a long time. Based on this, it can be assumed that soon the market initiative will move from altcoins to bitcoin.

Now it is very difficult to say where Bitcoin will move in the near future since the situation is extremely uncertain. However, we believe that the likelihood of growth is still higher than the likelihood of a fall because we do not see any major changes on the chart.