At the same time, the rest of the market began to grow rapidly and the capitalization of the crypto market again exceeded $2 trillion.

Let’s look at the chart of the first cryptocurrency and see if we should expect a new round of growth: 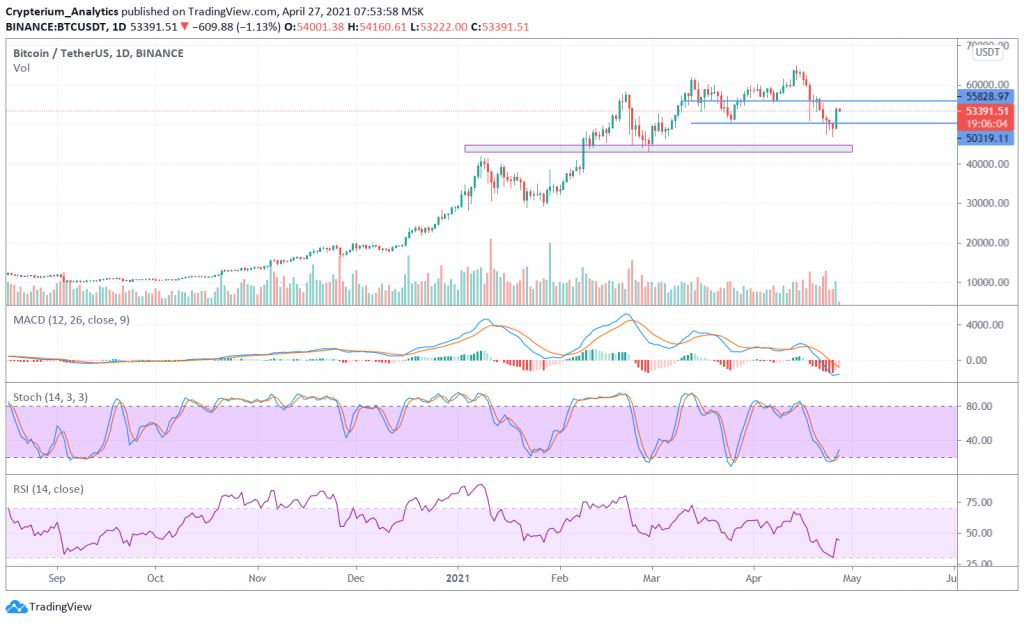 Yesterday’s green candlestick was quite high and allowed Bitcoin to gain a foothold well above $50,000. This move is very similar to the final pivot point after a protracted 30% dip. The weakness of sellers is indicated by large shadows from below on red candles and the almost complete absence of an upper shadow on a green candle. At the same time, volumes continue to remain low both in the fall and in the growth.

MACD dipped below zero and completed a large bearish divergence. Starting Monday, this oscillator has been showing signs of a reversal on both moving averages and the gap between them. The current unload was very necessary in order to free it up just for a new upward movement.

Stochastic has been near the overbought line for a long time and has gone down almost without stopping over the past 10 days, without pullbacks. This indicates a strong sell-off in the Bitcoin market and, potentially, a new round of growth. This indicator has already turned upward, but before that, it touched the lower border. Thus, Stochastic now has great growth prospects.

A similar picture is developing with the RSI indicator. Within 3 months, the strongest bearish divergence was formed on it, which fully worked itself out during the last fall. Now the RSI chart has turned around and is confidently looking up.

All this allows us to hope for new growth in Bitcoin. The immediate resistance is the $55,800 – $56,000 level. This is where the first strong resistance is located. Most likely, in the coming days, we will see Bitcoin rise to these levels.

If Bitcoin can gain a foothold above $56,000, then with a high probability, its price will rise up to $60,000. After yesterday’s sharp rise, the chart may briefly turn sideways to gain positions before a new round of growth. Be ready to grab more bitcoins.