At the same time, the volume of Bitcoin trading is gradually increasing. At the beginning of the week, it was less than $50 billion per day, over the last day – $72 billion. But despite this, the dominance of the first cryptocurrency on the market continues to fall.

Let’s take a look at the Bitcoin chart to understand where it will move in the coming days: 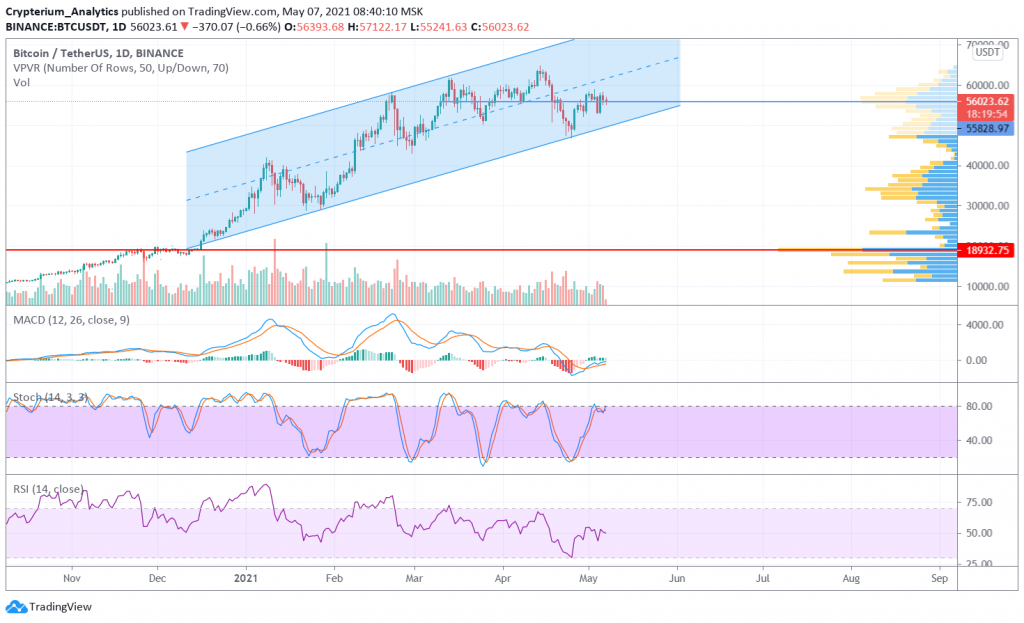 Bitcoin is still in an upward channel formed in early 2021. For the last 10 days, the chart turned into a sideways movement. This can be judged by the multidirectional candles and reduced volatility, which averages 2%. This is a very low indicator for the Bitcoin market.

Such a stop is a natural consequence of the fall of Bitcoin at the end of April. The rebound that we saw after that is a full-fledged correction of the fall. Now neither buyers nor sellers seek to force the schedule, but only gain positions.

At the same time, the $56,000 level is key. This is where the largest number of transactions take place. This can be judged by the lateral volumes, which significantly increase at this level. If Bitcoin can gain a foothold higher, then further growth awaits it.

MACD has definitely turned upward. So far, its growth rate remains low and this is a good trend for the market. The slow growth of this indicator often leads to strong movements on the Bitcoin chart.

Stochastic was unable to break through the upper border the first time and rolled back down. However, in the coming days, this indicator may gain a foothold above the overbought line, which will correspond to the growth of bitcoin.

RSI almost completely copies the chart movements. At the moment, it is near the middle line in the last 10 days and does not show growth. At the same time, there is still a large reserve for further growth of the RSI.

Apart from this, many other indicators point to further growth. Considering all these factors, we make the assumption that Bitcoin’s rise in the current situation is more likely than a fall. The best option to buy Bitcoin instantly with zero fees is the Crypterium Wallet.

The price of the first cryptocurrency could rise up to $66,000. This is almost 20% from current levels. From this, we conclude that the current sideways movement is the accumulation of positions by large players before new prolonged growth.