However, despite the growth of recent days, the trading volume remains low and amounts to about $34 billion. Altcoins, on the other hand, show a stronger upward trend. Three cryptocurrencies from the Top-10 increased by almost 10% per day.

Let’s try to figure out what to expect from the Bitcoin chart in the next few days and try to prepare for these events: 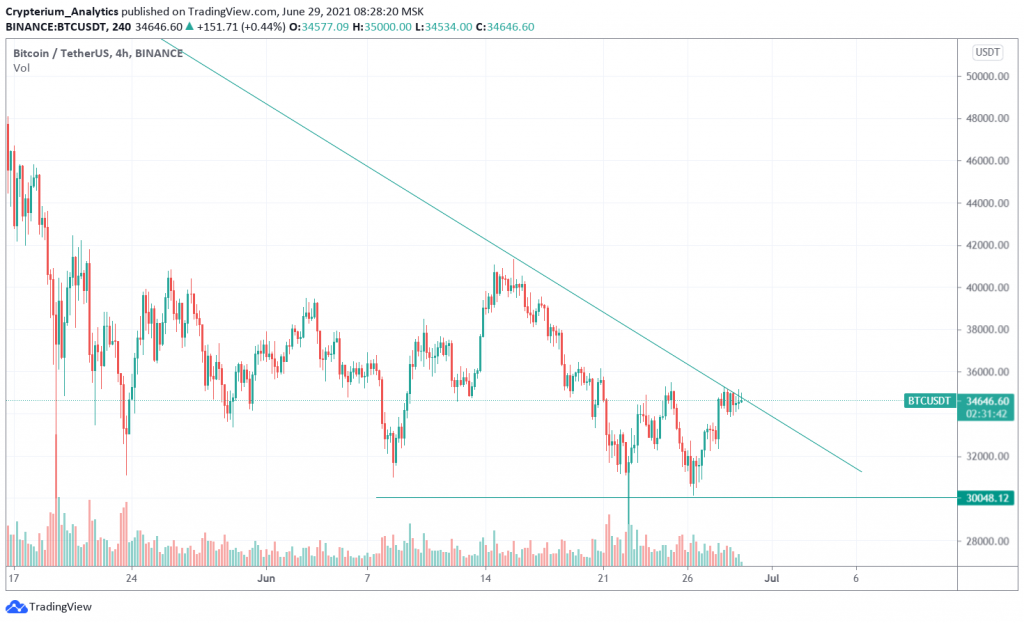 All yesterday, the Bitcoin price did not show significant movements. The chart turned sideways and moved within the $34,000 – $35,000 range. Additionally, the price is hitting a strong downtrend that has formed since the end of May. It turns out that the $35,000 level is strong resistance at the moment, and only if it consolidates above it bitcoin will be able to grow further.

At the same time, the chart ended up in a descending triangle, which negatively adds to the technical picture. The lower support level is the $30,000 zone. Confirmation of this is its breakdown on June 22nd, when the price fell to $28,800. Buyers very quickly bought back the entire fall and returned the price above $30,000.

Also, a “double bottom” pattern has formed on the chart, which is a reversal in a downtrend. However, it should be noted that this pattern has been formed several times over the last month, but this did not lead to a large-scale reversal. If you look closely, here too, the $35,000 level is the key for the pattern. According to this pattern, the price of Bitcoin can rise up to $40,000.

Summing up, it becomes clear that the fate of Bitcoin is now being determined. If the first cryptocurrency can gain a foothold above $35,000, then its chart may grow by 15% – 20%. In case of failure, Bitcoin can roll back to $30,000 and even lower. Despite all these signs, the decline is of a higher priority since the market is now very weak, and the information background has practically no effect on the Bitcoin chart.