The rest of the market also experienced a significant drop. Only 8 altcoins from the Top-100 list have shown positive dynamics over the past 24 hours, while only 9 cryptocurrencies have grown over the last week. Most other coins plummeted 10% or more. Altogether, this indicates that there are high tension and uncertainty across markets.

Let’s take a look at the Bitcoin chart and try to figure out whether this fall is critical for an uptrend and what to expect in the near future: 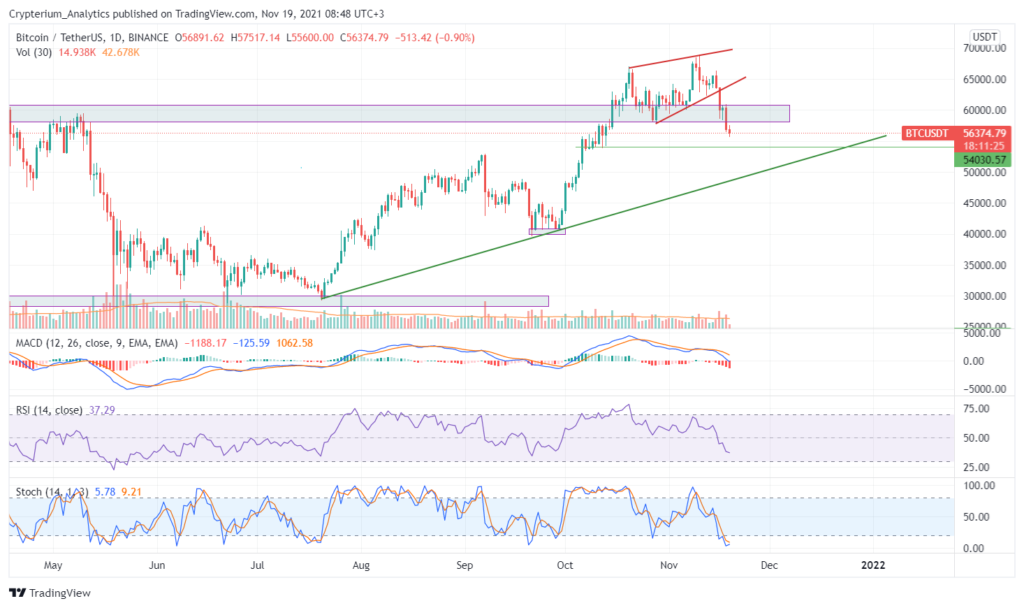 For a long time, the chart has been setting above the important support level of $58,000 – $61,000. Throughout the month, buyers have been successfully holding this zone, but they failed yesterday as sellers broke resistance and the price dropped to $55,600. A negative trend led to the daily candle closing below the support level as well.

We have anticipated this fall and have already predicted that it’s about to come. Even then, the Bitcoin price formed a rising wedge pattern, which means a reversal from the initial uptrend. When the lower border was broken, the price went down and continued to decline until this very moment. However, to make this pattern work itself out, Bitcoin must decline to the $54,000 – $55,000 price area.

The local support zone that was formed at the beginning of October 2021 is now located here. In addition, the same zone represented a significant support level in early May. And just after it had been broken, the market almost doubled.

We believe that this week’s decline is not over also because there has been no serious reaction from buyers yet. This is a very important sign, which indicates that active market participants are either absent or they continue to wait and want to buy at even lower prices. Both factors militate in favor of a new decline.

Based on all these considerations, we believe that by the end of the week, we may see another Bitcoin plunge by 4-5% to the level of $54,000. Additionally, we would say that nothing still poses a serious threat to the uptrend. The situation can change only if Bitcoin drops to $48,000, which would be quite difficult for the first cryptocurrency right now.