Crypto Daily: Bitcoin Dropped By 6% On The Last Day Of March

Over the last 24 hours, the Bitcoin price has decreased by almost 6% and currently stands at $44,500. As a result, trading volume jumped by 30% to $38 billion in one day. Altcoins also fell by about 5-6%. But at the same time, the Bitcoin dominance declined as well. This suggests that altcoins proved to be more stable during yesterday’s fall of the market.

Let’s take a look at the Bitcoin chart and try to figure out what direction the price may take this weekend: 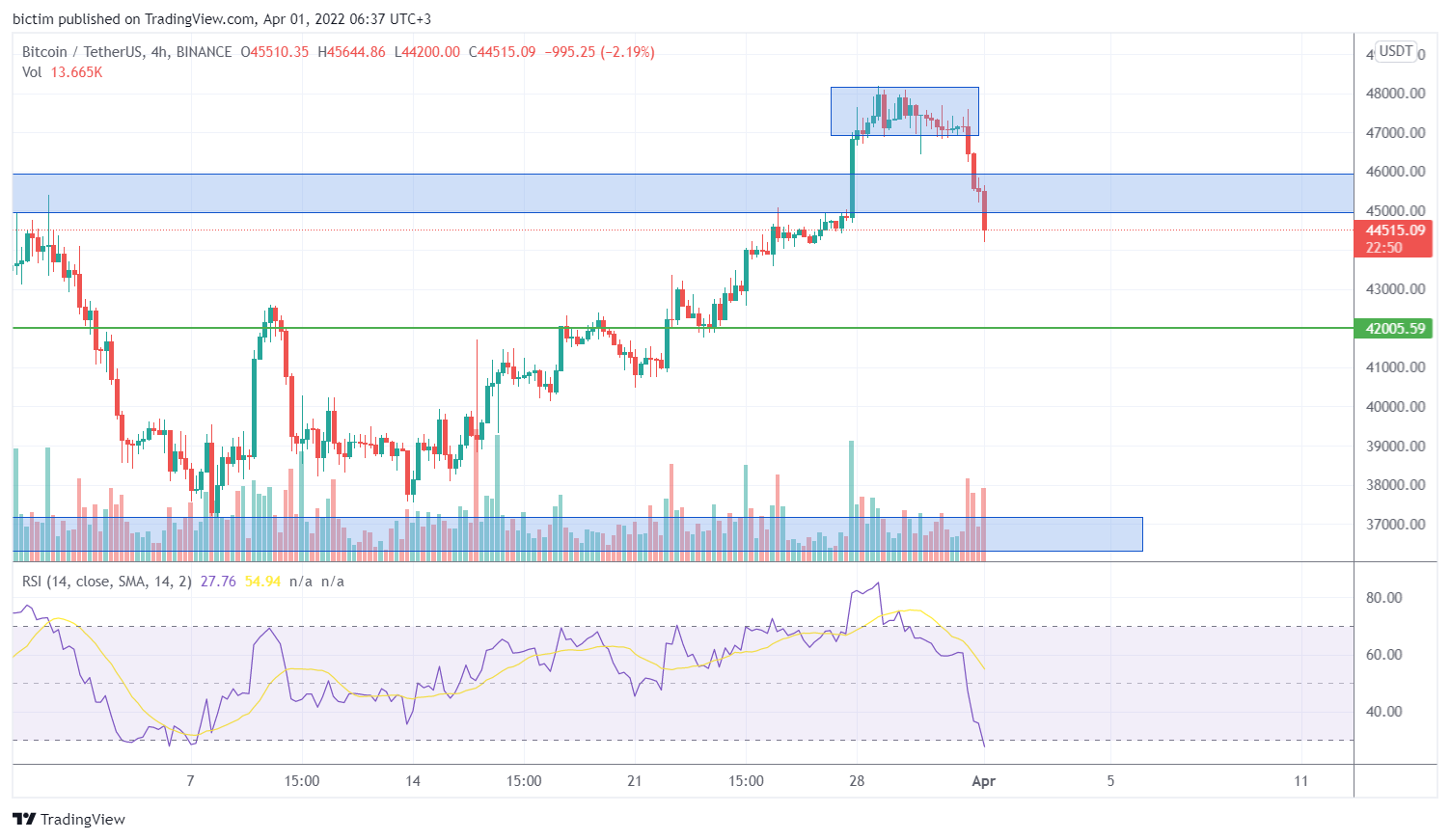 Bitcoin has failed to consolidate above $47,000 for a long time and finally fell down after 3 days of trying. Earlier this week, we warned that this scenario would take place. In particular, we expected to see a decline to the level of $45,000, and we turned out to be right. All our previously mentioned patterns worked out and justified themselves. This move was a classic retest that was needed after a two weeks’ bullish rally.

It should also be noted that the price slowed down sharply in the $46,700 – $48,200 zone. Now, we can say with confidence that this was the level where a distribution of positions among the major market players took place. This can be clearly seen on the 4-hour chart. This formation should be remembered and taken into account in the future.

The chart has now moved down to the $44,000 support level. Sellers are already getting weaker, however, buyers do not seize the initiative, which may affect the price in a bad way. This is important because bears did not face much resistance despite the fact that Bitcoin has fallen to the support level. Bulls are very sluggish in opening positions and this is alarming.

On the 4-hour chart, the RSI oscillator has already entered an oversold zone. Meanwhile, on the daily timeframe, the same indicator has just surpassed the 14-day moving average line and has approached the 55% mark. This fact suggests that the downward movement may continue.

The nearest support level is $42,000. Most likely, this is where the price will move by the end of this week. In addition, today is Friday and Fridays are notoriously famous due to market falls. Thus, we expect Bitcoin to drop by another 4-5%. And then the first cryptocurrency will grow again, starting next Monday.