At the same time, the rest of the market fell more than BTC by about 2 times. So, Ethereum lost 6%, Solana – 7%, and BNB – 5%. This has resulted in a slight increase in Bitcoin’s dominance in the market.

Let’s take a look at the chart of the first cryptocurrency and try to understand in what direction the price will move during the upcoming weekend: 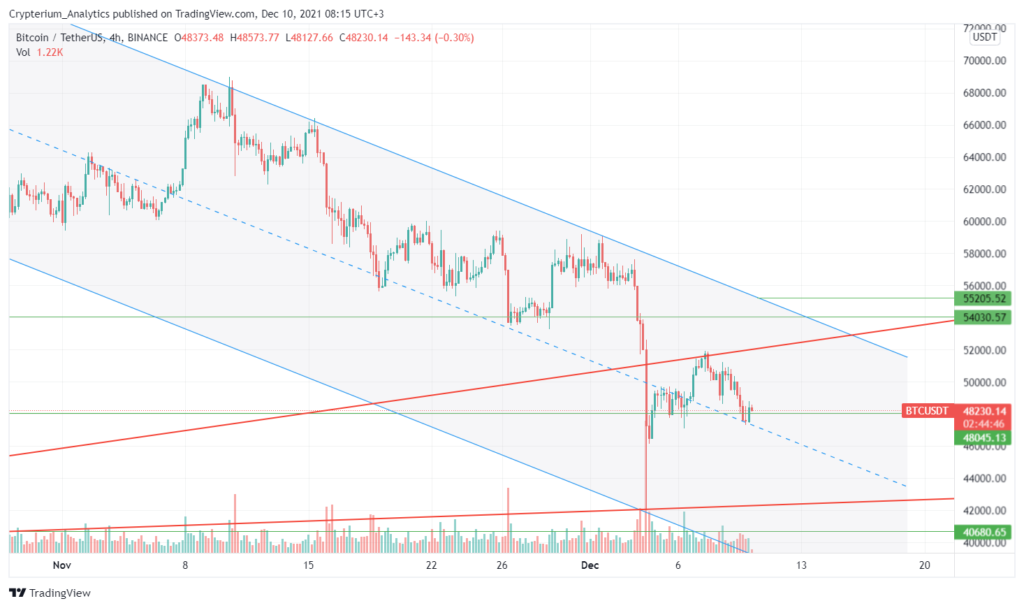 On Tuesday, December 7th, Bitcoin rose to the $52,000 mark and thus tested the uptrend from the bottom up. This movement is a classic retest in technical analysis, which speaks of the correctness of the trend designation. Buyers were unable to gain a foothold above this trend and have already pulled back down.

During yesterday’s decline, BTC chart reached the middle line of the descending channel. At the same time, it is here that the local support level is located. This caused the price to stop near $47,000 and then reverse up. Doji reversal candlestick formed at the same level.

All these movements did not significantly change the structure of the Bitcoin chart. The price has outlined the boundaries of the sideways movement, within which it is moving at the current moment. If the price can break through $47,000 and consolidate lower on the 4-hour timeframe, this will open up options for a further decline to the $43,000 area.

In addition, today is the end of the working week and this may negatively affect the crypto market. Many traders will take positions, which will cause the price to go down. This situation happens quite often. The last time it happened on December 3rd and November 26th. In the first case, the price fell by almost 30%, in the second – by 10%. Therefore, today you need to be extremely careful.

The current market situation still looks fragile. Any strong news or event can turn the chart in any direction. This is normal after such a sharp collapse, which happened on 3-4 December. In addition, the new year is approaching, which may also entail a significant decline in the markets, as many investment funds will take profits and sum up the results of the year. That is why the overall picture remains negative for Bitcoin and the downtrend may continue.