Over the past day, Bitcoin fell by 3.5% and reached $47,000. Trading volume continues to fall for 10 days in a row and amounted to $30 billion over the past day. At the same time, Bitcoin dominance dropped slightly yesterday. This suggests that the altcoins felt more confident and showed a smaller drop.

Let’s take a closer look at the Bitcoin chart: 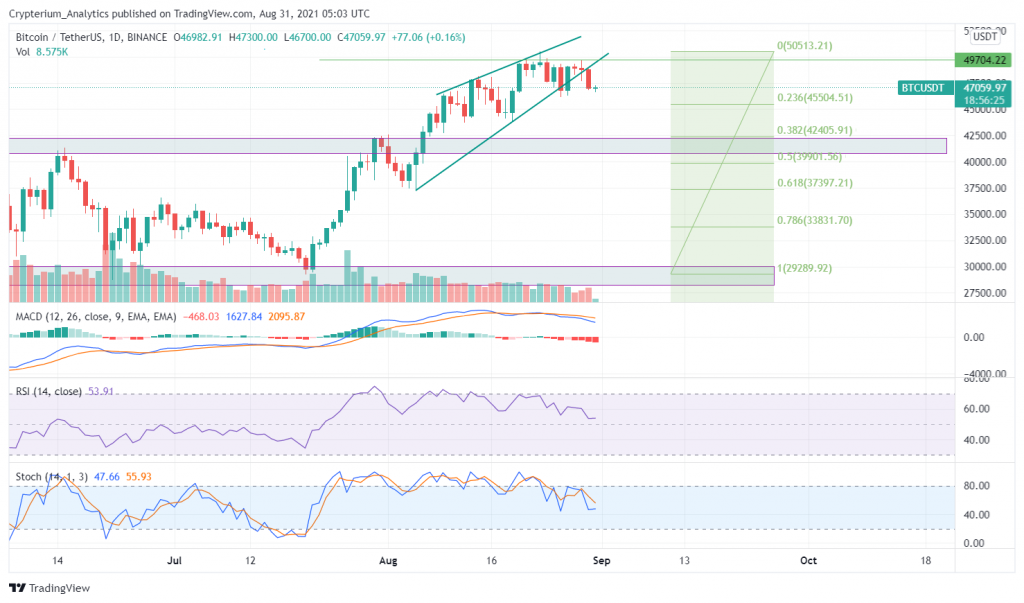 Since August 20th, the price has hit resistance at $49,700. Bulls tried to break this level almost every day. They managed to do this only once, but Bitcoin dropped back below the resistance level.

We said earlier that the Bitcoin chart is in a rising wedge. There are reversal patterns on an uptrend. As a rule, it indicates that sellers’ forces are beginning to prevail over the buyers. The decreasing trading volume that we’ve talked about only amplifies this signal. A few days ago, we saw a false breakout of the lower boundary, after which the price came back. The chart not only broke through this border yesterday but dropped significantly lower and consolidated below the figure. Most likely, this figure began to work itself out.

Let’s take a look at the RSI indicator. A bearish divergence can be clearly seen here. The peaks of this oscillator are progressively decreasing, while the price has increased since the beginning of August. Now the RSI has moved down to the middle line. To work out this divergence, the price must fall below $44,000. In this case, the pattern will work itself out completely.

MACD has practically stopped showing any trend in the last 2 weeks. This indicates sideways movement of the chart that occurs in the $47,000 – $49,700 range. But Stochastic started a slow decline and has already gone out of the overbought line. Most likely, this oscillator will continue to move to the lower border, which corresponds to the range of $43,000 – $44,000.

To determine to what levels the price of the first cryptocurrency can fall, we stretched the Fibonacci grid on the chart. According to her, the first support level is at around 0.236 or $45,500. However, this level is intermediate. The strongest is the 0.382 level, which is at $42,400.

Based on these observations, we can assume that the price of Bitcoin may decline to the range of $42,000 – $44,000 in the near future. This means that we expect a drop of about 10% – 15% for the first cryptocurrency. The $42,000 level is strong support for the chart. The further Bitcoin movement will become clear depending on how buyers will behave.