Crypto Daily: Bitcoin grew by almost 30% from the bottom Over the past day, the price of Bitcoin has grown by 5% and has overcome an important psychological level at around $50,000. Trading volume amounted to $37 billion per day. At the same time, Bitcoin’s dominance continues to decline. This suggests that at the moment, altcoins have a stronger structure and are growing faster.

It’s difficult to say how long this may continue. Let’s take a look at the Bitcoin chart and try to understand in which direction the price will move in the coming week: 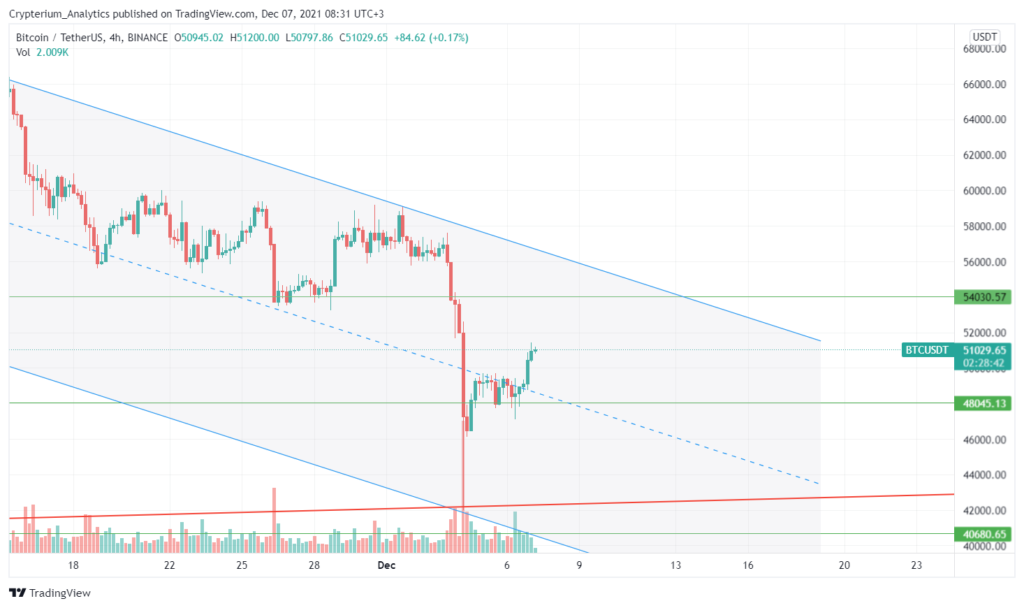 Last Saturday, the Bitcoin price dropped to $40,000. The chart was able to rebound from this level and has currently grown by 27%. We saw the high activity of buyers yesterday. Thanks to this, the chart was able to overcome the local resistance level of $49,500. After fixing above it, Bitcoin rose to $51,000 in a few hours.

The nearest resistance level is in the $53,600 – $55,300 range. A gap was formed on the CME exchange, which Bitcoin usually closes. This indicates a high probability of growth to the indicated levels.

Bitcoin is moving in a large downward channel. The price crossed the middle border of this figure yesterday and headed up. The chart may reach the upper border of the channel soon, which is in the range of $55,000 – $56,000. This is slightly higher than the values ​​we wrote about above. In theory, Bitcoin can make a quick jump to these levels and roll back down.

All indicators on the 4-hour timeframe show a confident reversal. During the weekend, all of them went down to the oversold zone and showed their minimum values ​​for some months. A few days later, we see that all oscillators have begun to recover and indicate further growth. This is in line with our assumptions for Bitcoin to continue to rise by about 10% from the current level.

The beginning of the week was favorable for the cryptocurrency market. The first cryptocurrency was almost able to close the chart gap created over the weekend and has prospects for further growth. Many altcoins have followed Bitcoin, and some are even ahead of it in terms of growth. This is a good signal for a recovery of the entire market in the near future.