Crypto Daily: Bitcoin Continues To Move In A Sideways Channel The fall of altcoins was stronger yesterday – their prices fell by 5% – 7%. As a result, the dominance of Bitcoin continued to increase and amounted to 44.5%.

Bitcoin growth was provoked by positive news from El Salvador. Let us remind you that this state accepted Bitcoin as a national means of payment along with the US dollar. Let’s take a look at how this affected the chart and try to predict the further movement of the first cryptocurrency: 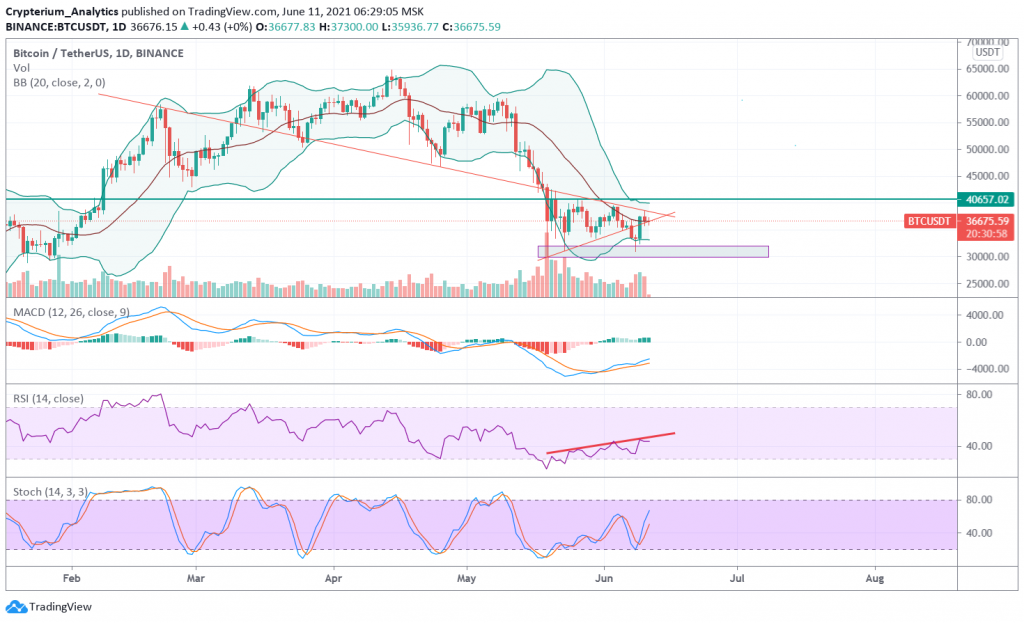 At the beginning of the week, a rising star candlestick pattern was formed on the chart, which is a reversal in technical analysis. The next day, the price increased by $4,000 or 12% and reached $37,000. However, growth did not continue yesterday and the chart rolled back down a little.

As a result of this movement, Bitcoin returned to the triangle and tested its upper border. We expected such a development of the event and spoke about it in our previous reviews.

Now the price is near the middle Bollinger line and is fixed above it. At the same time, there is a potential for growth up to $40,000, where the upper Bollinger line is located. This is where the chart will aim after the strong crashes in May.

Convergence continues to form on the RSI indicator. The peaks of the indicator are progressively increasing, while the peaks of the chart are decreasing. This indicates that Bitcoin has the prerequisites for growth. However, the rest of the oscillators remain neutral.

At the moment, the situation is quite complicated. The chart is below the trend line and we did not observe a strong jump in volume on growth on Wednesday. However, there are some signs that indicate growth.

Based on this, we assume that in the coming days, Bitcoin may turn upward and test the $40,000 resistance level. It is at this border that many factors on the chart indicate. Everything will depend on how the price behaves at this level.

That is why we recommend waiting for the approach to $40,000 or $30,000 and thinking about further trading there. Trading in a sideways flat, even such a wide one, is a dangerous business.