Top-10 altcoins increased from 12% to 17% per day. The market capitalization of cryptocurrencies has exceeded $1.5 trillion again and continues to grow.

Let’s analyze the Bitcoin chart and try to figure out in which direction its price will go next: 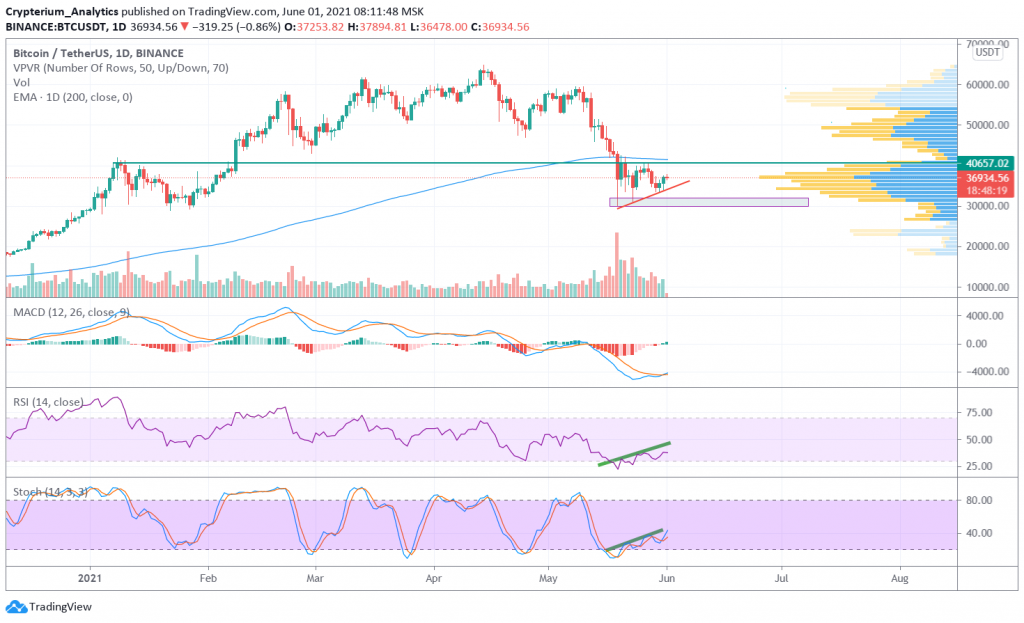 After a strong collapse of the Bitcoin chart, which happened on May 19th and 23rd, the price turned into a sideways movement. However, the lows are steadily increasing, which is a good sign for Bitcoin. At the level of $40,000, the main resistance level is located at the current moment. As a result, this has already led to the formation of an “ascending triangle” pattern.

There is a divergence on the RSI with the Bitcoin chart, which is called convergence. This indicator shows progressive growth, while the tops of the chart are getting lower. This is another bullish signal for Bitcoin. Exactly the same picture you can observe on the Stochastic indicator, which gives strength to this convergence.

The MACD indicator fell very hard during the last drop in Bitcoin. The discrepancies between its moving averages became the maximum for the entire time of the Bitcoin chart. However, in recent days, both lines have turned upward and are ready to move into an uptrend. This is also a positive sign for Bitcoin to consider new purchases.

But first, Bitcoin must rise to $40,000 and gain a foothold above that level. This is the key level at the moment and it is to it that many indicators point. After fixing above $40.0000, the price of Bitcoin can rise quite quickly by another 10% -15%.