Over the past day, there have been no significant changes in the market. Bitcoin and Ethereum continued to be at their previous levels. But the dominance of the first cryptocurrency on the market has already dropped to 41.75%. The last time we saw such values ​​was 3 months ago. At the same time, this indicator falls primarily due to the unrestrained growth in the price of Solana and Cardano.

Now it is becoming clear that the first-tier cryptocurrencies have stopped growing. At the moment coins from the Top-100 are beginning to show their growth. In general, this can be called a small altcoin season. It is necessary to understand how soon it can end. To do this, we need to look at the Bitcoin chart, since the further direction of the market will depend on its movements: 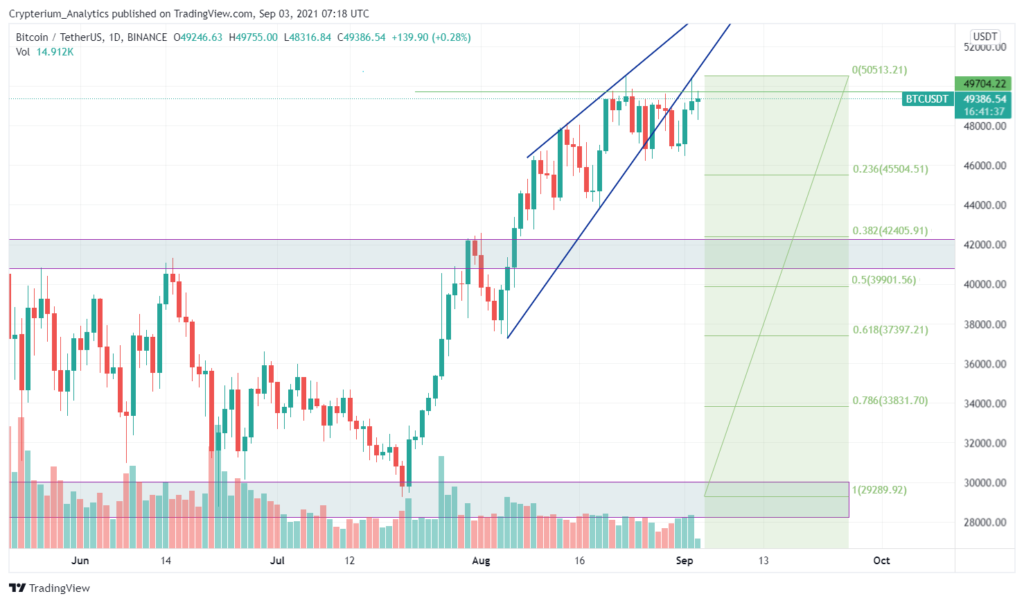 At the beginning of the week, the chart fell out of the rising wedge and fell to $47,000. After that, we saw a reversal and Bitcoin again approached $50,000. The chart was able to break this level yesterday and rise to $50,350. However, it failed to gain a foothold there and sellers again dropped the price below $50,000. This once again proves the strength of the current resistance level.

A sharp jump in growth allowed us to reach the bottom of the rising wedge. This is a classic chart retest and pattern confirmation pattern.

However, the current state of the crypto market can be called uncertain. This can be seen from the long sideways movement on the chart and the appearance of the “ascending triangle” pattern in the last 2 weeks. But it is smaller in size and may indicate local growth, as a result of which the chart may come in the range of $52,000 – $53,000 within 2-3 days.

If this happens, there will be another confirmation of the impending decline. Real changes can only happen if Bitcoin can gain a foothold above $53,000 on the daily, and preferably on the weekly, timeframe. Otherwise, we expect to see a drop towards $45,500.

This level is indicated by the Fibonacci grid stretched from $30,000. Also, this is where the lower Bollinger band comes in, which strengthens this level. On the weekly timeframe, it is clearly seen that the trading volume for Bitcoin is decreasing, and this is also a negative signal.

The current market situation is uncertain. At the same time, there are much more signs of a possible fall than of a rise. To reach a new ATH, Bitcoin needs to decrease 10% – 20% now. This will significantly relieve the chart and open the way to new highs.