Over the past 24 hours, the Bitcoin price has dropped by almost 4% and the cryptocurrency is now trading at slightly above $47,000. This means that Bitcoin capitalization fell below $900 billion again. But at the same time, the Bitcoin market dominance has been growing for 6 days in a row, which is a pretty bad sign for altcoins.

As a rule, a situation like this reflects increased attention to the original cryptocurrency and the flow of capital from altcoins to Bitcoin. Let’s take a look at how this may affect the BTC price in the coming days: 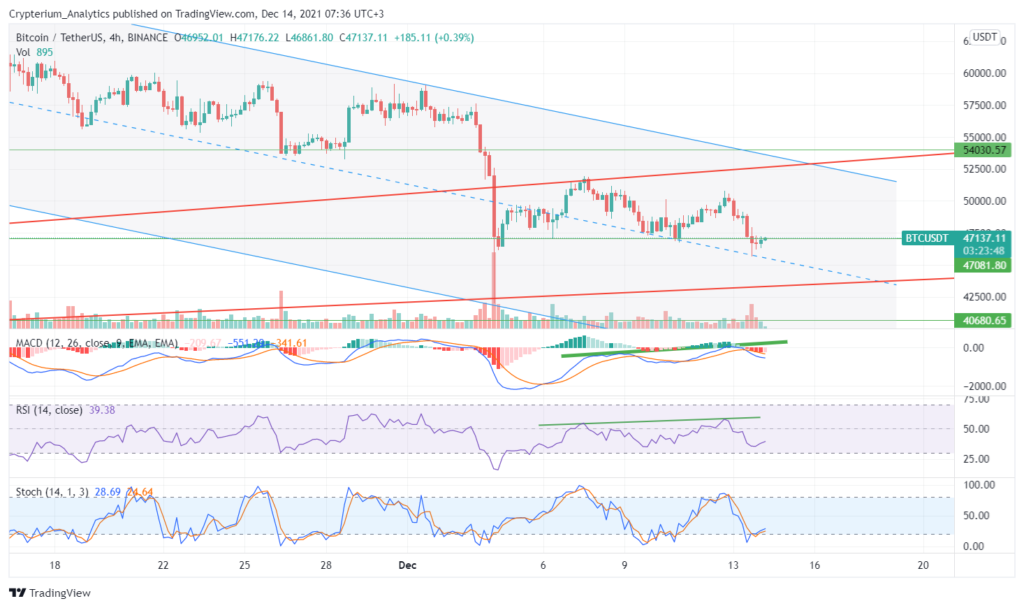 On Sunday, Bitcoin almost hit the $51,000 mark. Since then, the chart has started a progressive decline and has fallen by 10%. The chart approached precisely to the middle line of the descending channel and then pushed away from it, forming a doji reversal candlestick.

The chart still demonstrates a sideways movement and is now close to the lower border at the $47,000 level. It is a local support area for the BTC price that has already bounced back from it the last 3 times. However, it is necessary to pay attention to the weakness of buyers, who cannot gain a foothold above the significant levels. As a result, now sellers dominate over the market, which is a bad signal for Bitcoin.

Meanwhile, many indicators have formed the reversal patterns. So, at the 4-hour chart, the RSI oscillator has shown a convergence, which indicates that the market situation is discrepant. Moreover, the same pattern can be seen at the daily chart, which only makes the trend more obvious.

The MACD indicator has experienced the same. Its moving averages are progressively increasing at the 4-hour chart, while the price is forming new troughs. Stochastic has also been in the lower zone for a long time, which proves that the period of accumulating positions is in full swing.

Based on the current situation, we expect the following scenario: sellers will be able to break through the $47,000 support level first and thus they will drop the price by another 6% – 8%. This means that the chart will go down to the $43,000 – $44,000 area. There is also an uptrend line, and consolidating below it is very undesirable for further growth. After that, we expect to see some lull followed by a sharp upward jump up to $50,000.

This altogether is due to the fact that many market participants will fix their positions in the coming week right before the holidays. Many of them will stop following the crypto market at this time, which will lead to the larger players accumulating their positions. Usually, after such events we often see sharp trends start going in the opposite direction. Please note that this is a private opinion of our company and we will stick to it.