Altcoins have demonstrated multidirectional movement and their market dominance has slightly risen over the previous day. Now, the crypto market remains calm.

Let’s take a look at the Bitcoin chart and try to understand in which direction it’s going to move this weekend: 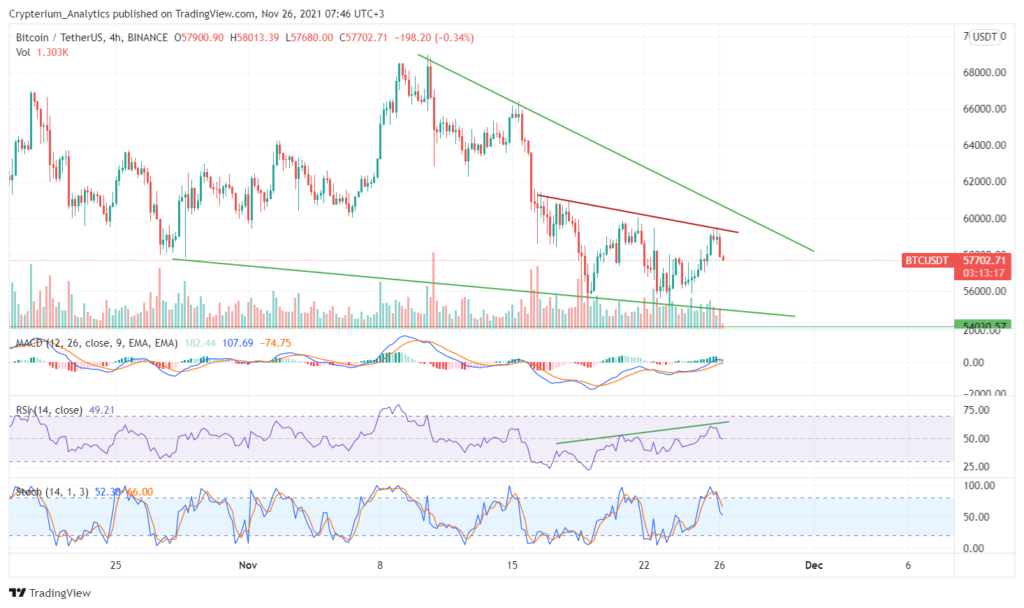 The price has been fluctuating below $60,000 for the last 10 days. The chart is squeezing in sideways, between the $56,000 and $60,000 levels. Sellers have stopped their strong pressure on Bitcoin, however, buyers are quite reluctant to take over. One gets the feeling that both sides are waiting for some signal or news to buck up.

Meanwhile, Bitcoin continues to move in a falling wedge that started to form a month ago. This can be the most important signal for the price to leave the local downtrend. Bitcoin has already dropped to the middle line of the figure, and now, it is moving somewhere around there.

At the same time, after Bitcoin had collapsed with the price declining significantly from its historical high, the chart formed a double bottom pattern. Early in the week, we mentioned that this pattern had already started to form but the figure finally took shape yesterday. This indicates that Bitcoin may grow by $4,000 to $63,500 after the $59,500 level was broken.

Additionally, a convergence has formed on the 4-hour chart showing the RSI oscillator. The Bitcoin chart peaks have been steadily decreasing in recent days, while the situation with this indicator is the opposite. This suggests that we may see Bitcoin starting a sharp upward trend in the near future. If BTC manages to gain a foothold in the $60,000 – $63,000 area or above, it will most likely experience a recoilless growth and establish a new all-time high.

The current calm on the cryptocurrency market is temporal. Market participants are gathering their strength and working out a plan for the next actions after Bitcoin set a new ATH of $69,000. Based on all the factors mentioned above, we believe that the first cryptocurrency’s uptrend will continue and Bitcoin will attract much attention again soon.