At the same time, the dominance of Bitcoin in the market continues to grow and is already 47%. Let’s take a look at the chart of the first cryptocurrency and try to figure out where the price will move in the coming days: 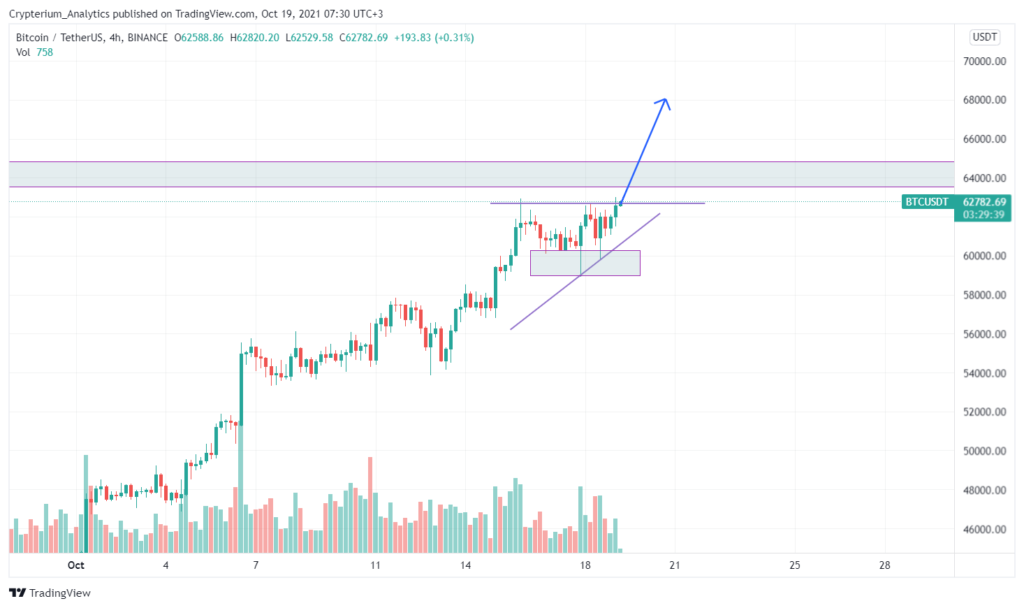 Over the past 3 weeks, the Bitcoin price has risen by 54% from $40,600 to $62,900. All this time, the chart was growing almost non-stop and did not experience serious corrections. At the same time, the rest of the market lags significantly behind the first cryptocurrency, since the dominance of Bitcoin has been increasing rapidly since the beginning of October.

Obviously, the chart is moving now with little breaks. This means that after a sharp increase of 10% – 15%, a transition to a sideways movement follows within 3-5 days. Then the cycle repeats again. A similar situation exists at the current moment. After a sharp rise to nearly $63,000, Bitcoin has stalled and consolidated above $60,000. This is a good signal for further growth.

Sellers tried to push the price below $60,000 almost every day but met with strong support at these levels. Buyers very quickly bought these straits and returned the price back up. This additionally indicates the current strength of Bitcoin.

Now the “Ascending Triangle” pattern has formed on the chart, which is a trend continuation pattern. At the same time, the “Three White Soldiers” candlestick pattern is formed on the chart. Both formations indicate a continuation of the uptrend. In the event that the price breaks out and consolidates above the upper border of the ascending trendline, Bitcoin can show a very significant increase, up to the range of $67,000 – $69,000.

Bitcoin continues to rise on rumors of the addition of the first Bitcoin futures ETF. Rumors surfaced last Friday that the SEC approved the application from ProShares as it did not reject it before the due date. On the same day, Bloomberg terminal added a new ticker BITO that matches this ETF. Just yesterday, The New York Times announced that this index fund will begin trading on October 19 on the NYSE. Earlier, another major US exchange, Nasdaq, announced that it was ready to add a similar ETF from Valkyrie Investments.

Against the background of this news, the price of the first cryptocurrency has overcome the important psychological milestone of $60,000 and is confidently settling above it. Now the price is at a distance of 3% – 4% from its historical maximum and can overcome it already this week.