The rest of the market showed even more impressive growth. Thus, Ethereum and BNB grew by 8.5%, and the dominance of Bitcoin on the market fell to 44%.

Let’s take a look at the chart of the first cryptocurrency and try to understand how it will behave this weekend: 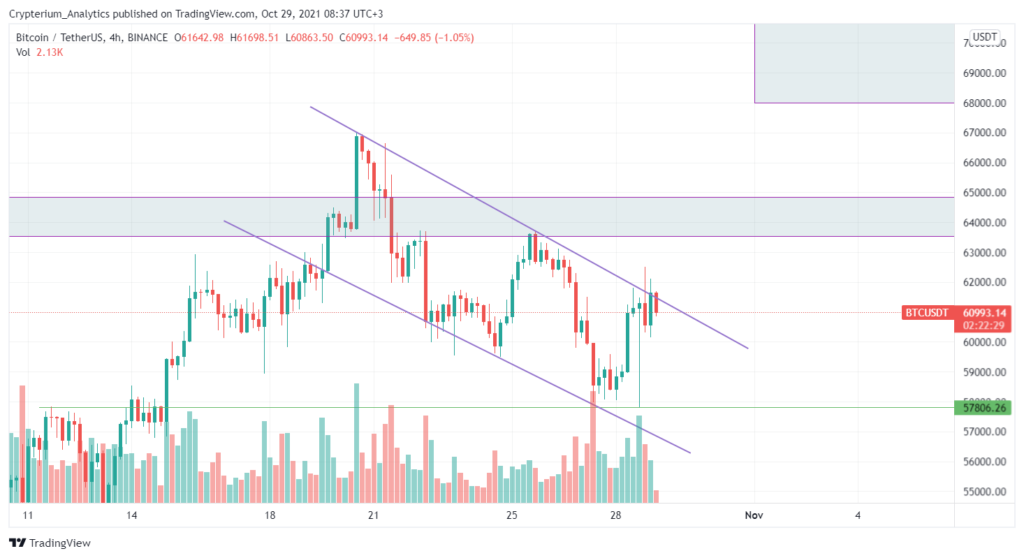 After reaching ATH at $67,000 on October 20th, Bitcoin smoothly moved into a downtrend. If you look closely, you will notice that Bitcoin has corrected in a standard 3-wave correction with a local minimum at $58,000.

At the same time, the formation of two patterns at once can be noted on the chart. The first is shown in the figure and represents a descending or bullish channel. The second shape that can be drawn is the falling wedge. Both of these patterns are a signal for a reversal and continued price growth.

Just yesterday, the price bounced off the lower border of the descending channel and quickly came to its upper border. There was a strong struggle between buyers and sellers. This can be judged by the structure of Japanese candlesticks, which are constantly changing directions, and the increased trading volumes at this level.

At the same time yesterday, there was a sharp drop from $61,000 to $57,800. This happened literally within 2 minutes, and after that, the price quickly returned to its previous levels. Usually, such situations are evidence of market manipulation. Perhaps a large player deliberately removed many stop-losses and knocked players out of the market in order to subsequently accelerate the price growth. Situations like this have often led to growth from a historical perspective.

There are many signs suggesting that a breakout of the important $61,500 level may take place in the coming days. Buyers have already done this several times, but they could not gain a foothold higher. If this happens, then Bitcoin can rise to $63,500 within a few hours. Subsequently, this will open up upside potential in the $68,000 – $71,000 range.