As a result, the trading volume increased sharply by 35% and amounted to $40 billion per day. The rest of the market showed weaker growth, with some exceptions, and therefore the dominance of Bitcoin on the market increased by 1.5% per day.

Let’s take a look at the chart of the first cryptocurrency and try to figure out if this growth will continue in the near future: 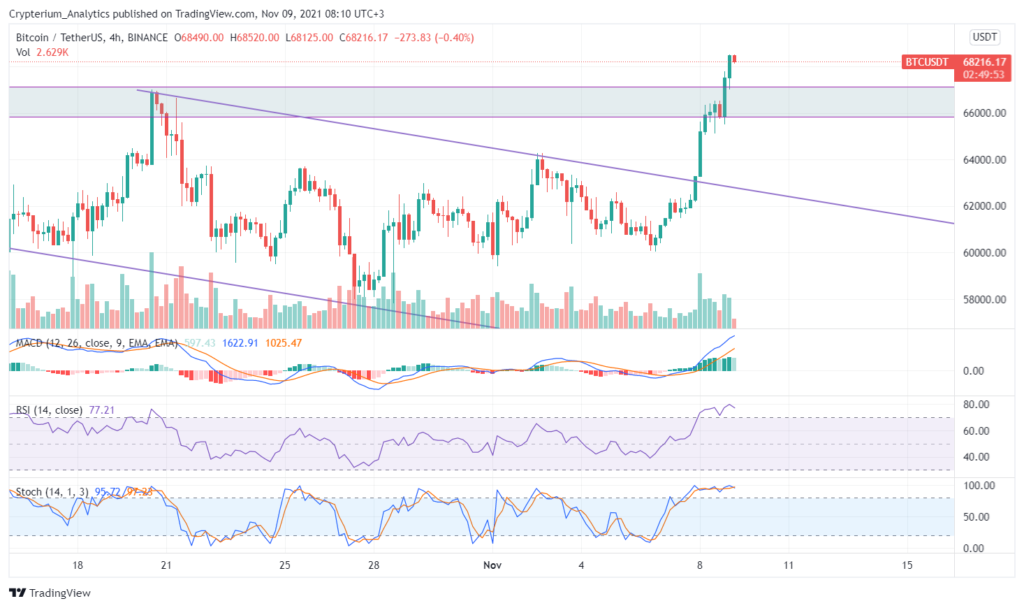 On Sunday evening, the Bitcoin chart emerged up from the downtrend channel and fixed confidently above it on the 4-hour timeframe. Moreover, the price continued to rise and the day closed at $67,525. This is already higher than the previous ATH and is a good pattern for Bitcoin.

The broken down-channel was a bull flag pattern, so the Bitcoin price can continue to rise rather quickly. If this pattern works out, the chart may reach $82,000. But first, Bitcoin must overcome an important psychological level, which will most likely be in the $70,000 – $75,000 range.

On the 4-hour timeframe, the RSI and Stochastic indicators are already in the overbought zone. However, this can continue for quite a long time. At the same time, on the daily timeframe, the RSI has just approached the upper border, so the movement may continue. Stochastic broke the upper line only during yesterday’s strong growth. All this suggests that Bitcoin has a strong uptrend and growth may continue.

In addition, the chart has been moving in a strong upward channel for almost 4 months since mid-July 2021st. At the same time, the upper border of the channel is strong resistance, which the price cannot breakthrough yet. In the next 2 weeks, this border will be in the range of $74,000 – $76,000. This proves the fact that this level will be key for Bitcoin and the price will strive to reach it.

An important event for Bitcoin will happen this Saturday. There will be an important network update in the form of a soft fork, which will add Taproot functionality and Schnorr signatures. Most likely, against this background, we can see a small rally in Bitcoin and the price will be able to break through the $70,000 mark by the weekend. However, it’s unlikely that BTC will break above $75,000 right away.