Bitcoin became the main growth driver. As a result, its market dominance increased from 42% to 43%.

Let’s take a look at the chart of the first cryptocurrency and try to figure out in which direction the chart will go next: 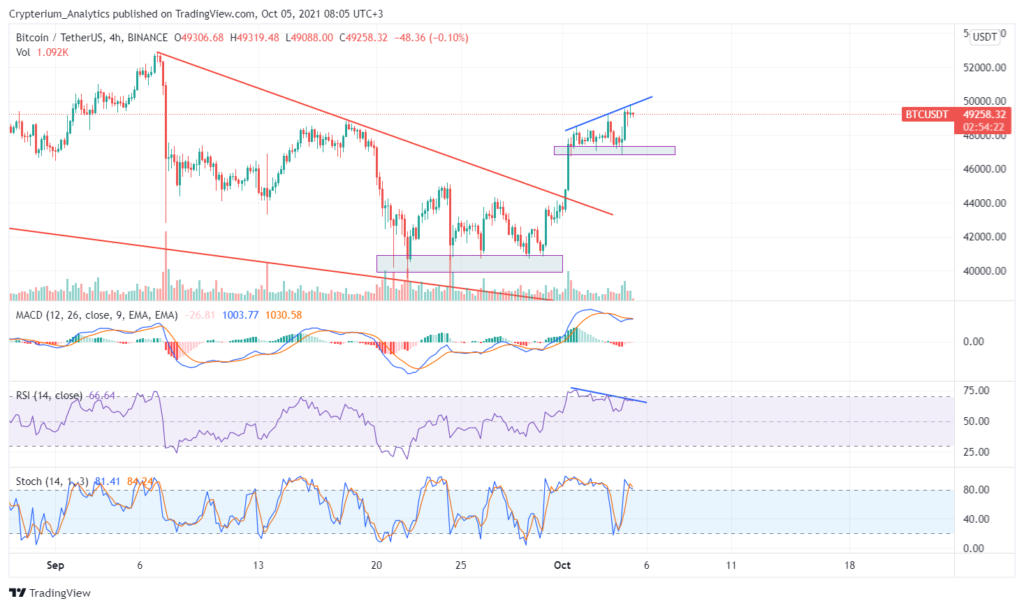 The Bitcoin price has already risen by 22% from its local minimum, which was formed on September, 29th. In just a week, the chart has grown by $9,000 from $40,700 to $49,800. This happened after Bitcoin being able to break up the global falling wedge pattern. We’ve warned about this development of events. Still, the potential of this movement has not yet been exhausted and growth may continue.

After the breakup of the $47,000 level, the chart movements slowed down and turned into a sideways movement. Sellers tried to push the price back down several times but met strong resistance from buyers. Thus, a fairly strong support range of $46,700 – $47,400 was formed.

Bearish divergence was formed on the 4-hour and 1-hour timeframes. This can be seen on the RSI and MACD indicators, which show a progressive decrease in tops, starting from October, 2nd. Coupled with the consolidation above $47,000 and the absence of growth after that, this formation may indicate an impending decline and reversal.

In addition, an “expanding triangle” pattern was formed on the chart. It is almost completely formed and we can see its development soon. The price touched the upper border and has turned down already. In the near future, there is a high probability that the chart will only accelerate downward and may fall below the $47,000 mark. This can happen today.

Thus, at the moment, we see several signs of a local decline at once. It is now very necessary since Bitcoin has already grown by 22% and this is a great indicator. Therefore, today and tomorrow, the chart should experience a slight correction before reaching the $52,000 – $53,000 range.