Crypto Daily: Bitcoin stagnated at around $56,500 and prepares to make new moves Over the past 24 hours, Bitcoin’s value has not changed and the price is still around the $56,500 mark. The trading volume is gradually decreasing and has already fallen by 10% for the previous day. Let’s take a look at the Bitcoin chart and try to figure out what may happen next weekend: 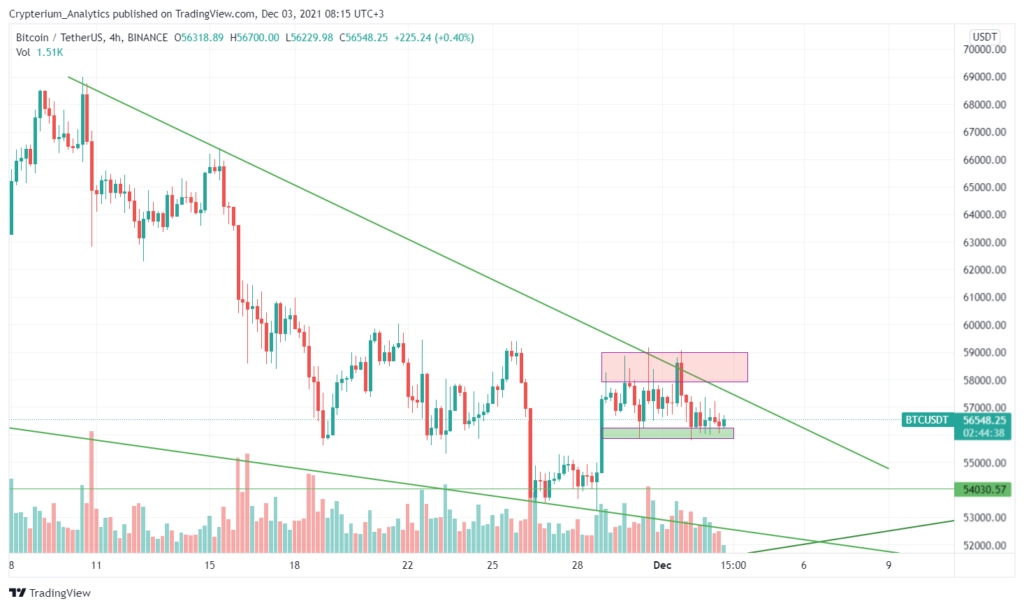 The Bitcoin chart is still within a big falling wedge. For the last 4 days, the price has been moving near the upper border and has already made 4 attempts to overcome it and gain a foothold. However, buyers cannot make this happen as there are active sellers waiting for Bitcoin to approach $59,000. As soon as the price reaches this level, the amount of sales will begin to increase and Bitcoin will return to its previous levels.

At the same time, another local support level has formed in the $55,700 – $56,200 area, which buyers have already tried holding several times. Yesterday evening, the price was slightly above this support level that had previously kept Bitcoin from falling in the second half of November and can now be considered quite strong. However, if the chart falls below $55,700 and consolidates there, then the first cryptocurrency may plunge even lower to $54,000 – $55,000.

If the price bounces off the support and reaches $59,000, there will be a good signal to enter purchases. In this case, the chart will break an upward border of the falling wedge and form an inverted head and shoulders pattern. Both these patterns will indicate a reversal and potential Bitcoin’s uptrend.

Meanwhile, it should be noted that we will see activity in the cryptocurrency market decreasing due to the upcoming weekend. This means that if any manipulator decides to break the levels, then it will be much easier for him to succeed. However, recently, the Bitcoin chart has not significantly moved over the weekend. Now, the best option is to be outside the market and see whether one of the outcomes that we have outlined above checks out.