Bitcoin price has not changed since yesterday and still remains at the $57,000 level. However, the chart briefly broke past $59,000 but didn’t manage to consolidate there and rolled back down. At the same time, the rest of the market demonstrated a slight growth, which resulted in Bitcoin’s market dominance declining again.

This was primarily due to the Ethereum price that has increased by 6% over the past 24 hours. Now, the most popular altcoin is trying to gain a foothold at above $4,700. Let’s take a look at the Ethereum chart and try to understand whether its ongoing uptrend will further continue: 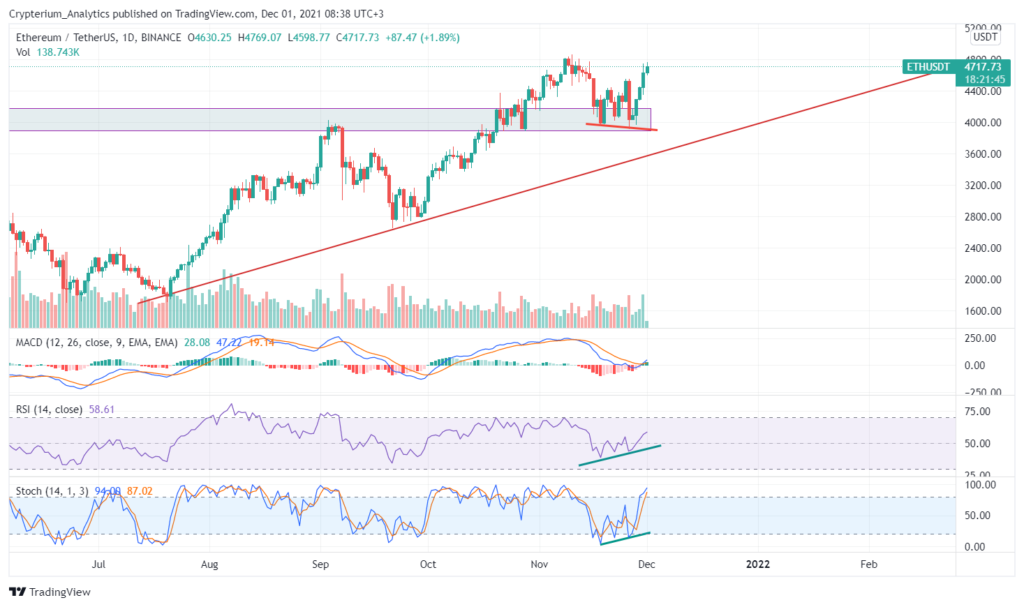 In early November, Ethereum reached the all-time high of $4,868. Since then, the ETH price has experienced a 20% correction and fell to $3,960. We have already designated this mark as a strong support level, which eventually worked itself out completely. A few days after the price had entered this zone, buyers pushed it up by almost 20%. On the weekly chart, you can see that Ethereum is currently settled between $3,900 and $4,000, which is a key area at this stage of growth.

Moreover, the ETH weekly candlestick closed as a doji, which indicates a potential reversal. The chart has already started to work out this pattern and has almost reached the previous ATH. This trend will most likely continue and Ethereum will be able to block this level.

After falling to the $4,000 area, the Ethereum price has been moving sideways for about two weeks. During this time, a double bottom pattern has been formed on the daily chart, which also means that the reversal is about to come and the Ethereum chart may keep rising up to the $5,000 – $5,100 level.

Earlier, a convergence was formed on two indicators. RSI and Stochastic turned up, while the price continued to fall. Now, the chart is starting to correlate with these oscillators, proving that the local uptrend that began last weekend is not finished yet.

MACD does not show any discrepancies with the price, but this is not required as this indicator is more trendy. At the moment, it has dropped significantly and gone below zero. However, in the last 2 days, the moving averages have begun to reverse and this is an additional signal for the growth of Ethereum.

As we can see, there is great room for Ethereum to grow. The cryptocurrency left the $4,000 – $4,400 sticky zone and established above it. Moreover, the ETH chart looks more powerful than that of Bitcoin, indicating that this is Ethereum that may stimulate a new wave of market growth and the subsequent altcoin season. So, now is probably a great time to enter positions.