At the same time, the rest of the market showed the opposite movement, since most altcoins increased in price or remained at the same levels. Because of this, Bitcoin’s dominance fell below 44% again.

Let’s take a look at the chart of the first cryptocurrency and try to figure out where the price might go on the weekend: 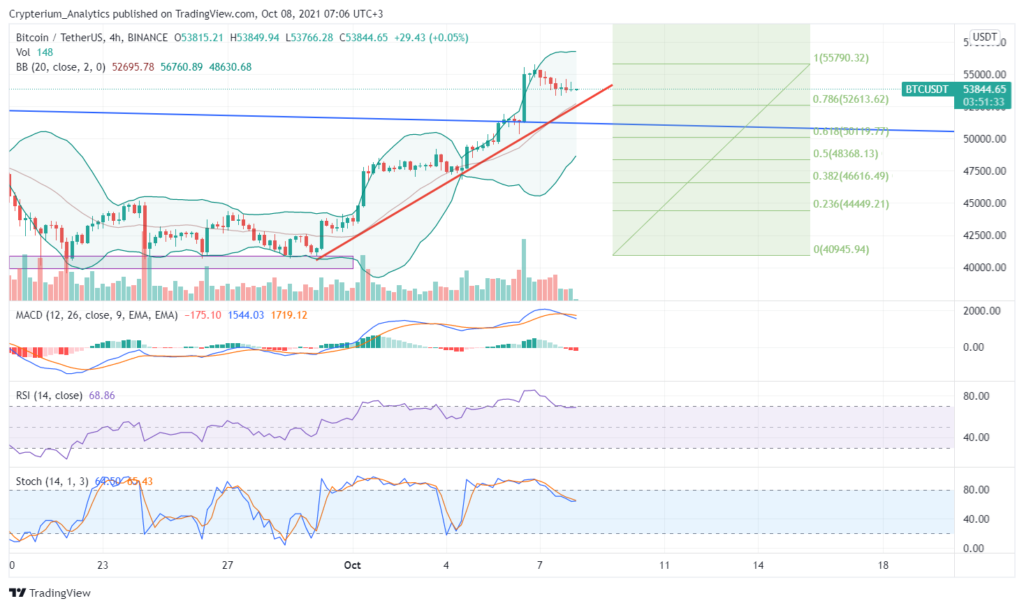 As we expected, the Bitcoin price stopped after a sharp impulse, during which it set a local maximum at $55,750. All yesterday, the chart was down and fell 4% from its high. At the same time, the trading volume during this movement came to its average value.

As a result of the 27% growth, Bitcoin has formed a strong uptrend along which the price is moving. Already 3 times the chart bounced off this line and rushed up. This is a good signal that buyers are actively holding positions and prevailing over sellers.

At the same time, most indicators point to strong overbought. So, the RSI reached 85.5 and this is a very large value. Stochastic also stayed above the overbought line for quite a long time. Now, both of these oscillators have turned down and may decline to the lower border within 2-3 days on the 4-hour timeframe.

In addition, after such strong growth, Bitcoin has not yet experienced significant corrections. Therefore, we have stretched the Fibonacci grid to determine the nearest levels to which the price can fall. The chart shows that the nearest zone is near the 0.786 mark, which corresponds to $52,500. The Bollinger average line and the uptrend line come into the same zone. This indicates the importance of this area. Most likely, this is where we can see strong buyer’s support.

However, we do not exclude the fact that sellers can test the downtrend already at the weekend, which the chart broke through on October 6th. In this case, the price of Bitcoin can drop to $50,000, which is an important psychological level.

We note that these are local Bitcoin movements. The global trend is still upward. Therefore, the nearest correction will be an excellent option for entering a position in the medium term.