The dominance of Bitcoin in the market began to increase again and is now 41.2%. Let’s take a look at the chart of the first cryptocurrency and try to figure out what to expect over the weekend: 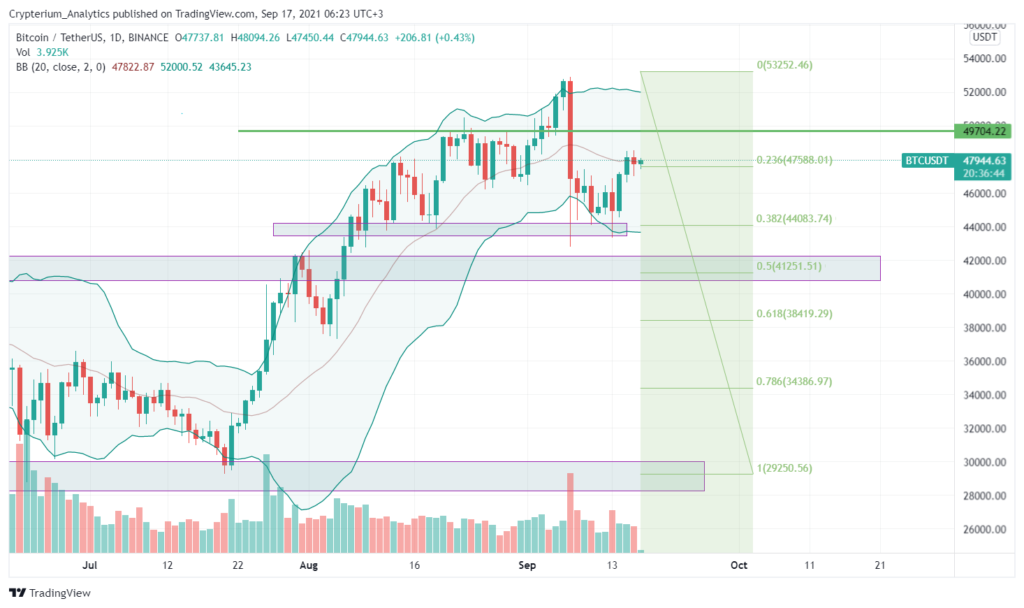 As we’ve predicted at the beginning of the week, Bitcoin was able to overcome the key level of $46,000 and rose to $48,500. This allowed the chart to move upward from the formed falling wedge and break the downtrend line.

It can be noted that the exit candle closed very strongly and had a strong bullish engulfing pattern. This formation has not yet won back itself completely and we can see growth by the same number of points.

On the daily timeframe, we looked at the Bollinger Bands and saw a good sign for the uptrend to continue. First, the price dropped to the lower border and moved near it for some time. After that, the chart turned upward and came to the middle line, which is at $48,000. A strong upward movement may continue up to the upper Bollinger band.

But before that, the chart will test the important resistance zone at $49,700. This is where sellers put significant pressure during the last rally. As a result, a strong level was formed here, which is the key for Bitcoin at the moment. If the price breaks it, the chart can set new local highs rather quickly.

We have stretched the Fibonacci grid from the moment of growth from the beginning of August this year. And we saw that the chart moves almost perfectly along these levels. During the September 7th fall, the price dropped to the 0.382 level. Now the chart has briefly stopped near the 0.236 level, which corresponds to $47,600.

In addition, if you look at the hourly timeframe, you can see the formation of a new falling wedge. This also confirms our thoughts that in the coming days the Bitcoin price may reach $49,700 and even go above $50,000 for a short time.