Following the first cryptocurrency, altcoins fell. At the same time, the fall in altcoins again became more significant. This can be judged by the increased dominance of Bitcoin. The only Top-100 coin to show positive growth was Theta Fuel.

The current drop was due to a statement by Donald Trump in which he called Bitcoin a scam competing with the US dollar. This sparked an immediate reaction in the crypto markets and many traders and investors started selling Bitcoin.

However, a little earlier it became known that Microstrategy is once again going to place bonds on the market in order to acquire the first cryptocurrency. The amount is again significant – $400 million.

All this had a strong impact on market participants. Someone bought, someone sold Bitcoin. But let’s take a better look at the chart and try to figure out what is happening with the first cryptocurrency and what to expect next: 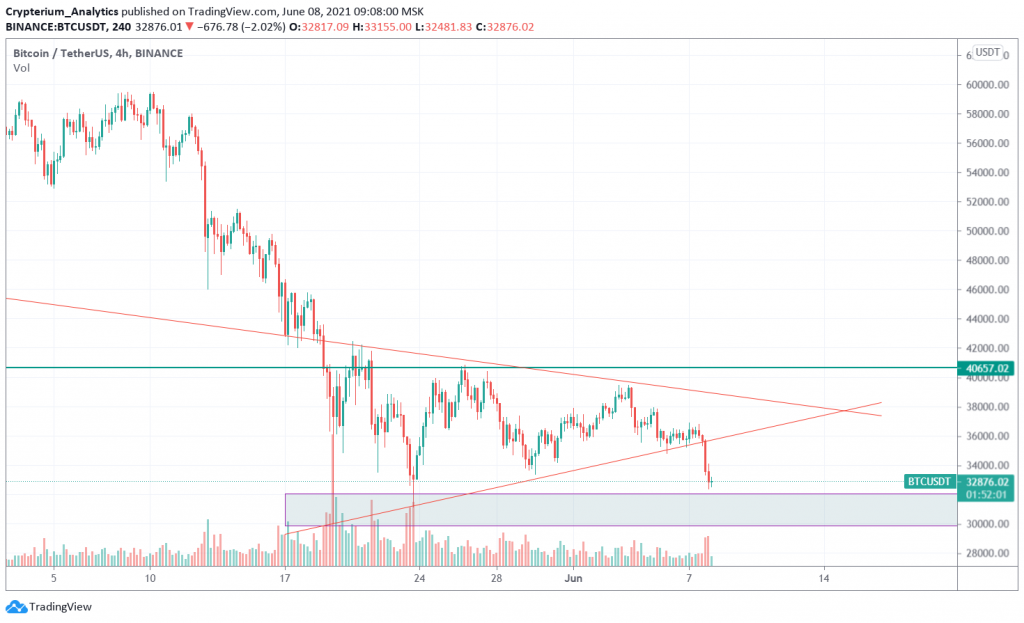 In the past two weeks, the price has been trapped in an equilateral triangle. The chart could not break through either the upper or lower border of the triangle. Just yesterday, we wrote that if bitcoin fixes below the lower border, then it can fall to the range of $30,000 – $32,000. So far, the price has dropped to $32,350 and bounced up to $500.

It is important to note that the current decline has not been accompanied by a strong increase in volumes. This is especially noticeable if you open the daily timeframe. However, we do not see a strong reaction from buyers to this move. Market participants are in no hurry to buy Bitcoin at current prices and this is alarming, coupled with decreasing volumes.

Candlestick patterns also do not indicate an imminent reversal. Liquidation volume is not significant for the current market and amounted to about $1 billion during this fall.

In general, there is a strong weakness of buyers in the market. The market practically does not react to positive news, while negative news is greatly inflated. It looks like a continuation of a negative scenario. We believe that there is a high probability that the price of Bitcoin may soon fall to $30,000 or even lower. In this case, the chart can go down to the $27,000 mark quite quickly, collecting a huge number of liquidations.

So far, we do not see how the charts can turn up. The only thing left in this situation is just to wait.