Crypto Daily: Bitcoin Is Ready For Another Fall

Volatility has decreased significantly in recent days and the price is trading in the $37,000 – $40,000 range. In addition, the trading volume of Bitcoin has significantly decreased, which amounted to $40 billion per day.

A similar picture is observed in the rest assets of the crypto market. Altcoin price movements have calmed down and none of the market participants seeks to take the initiative into their own hands. It can be argued that the market calmed down and switched to a sideways movement. However, this can be a deceiving situation. Let’s take a look at the Bitcoin chart to see how long this situation will last and what the next strong move will be: 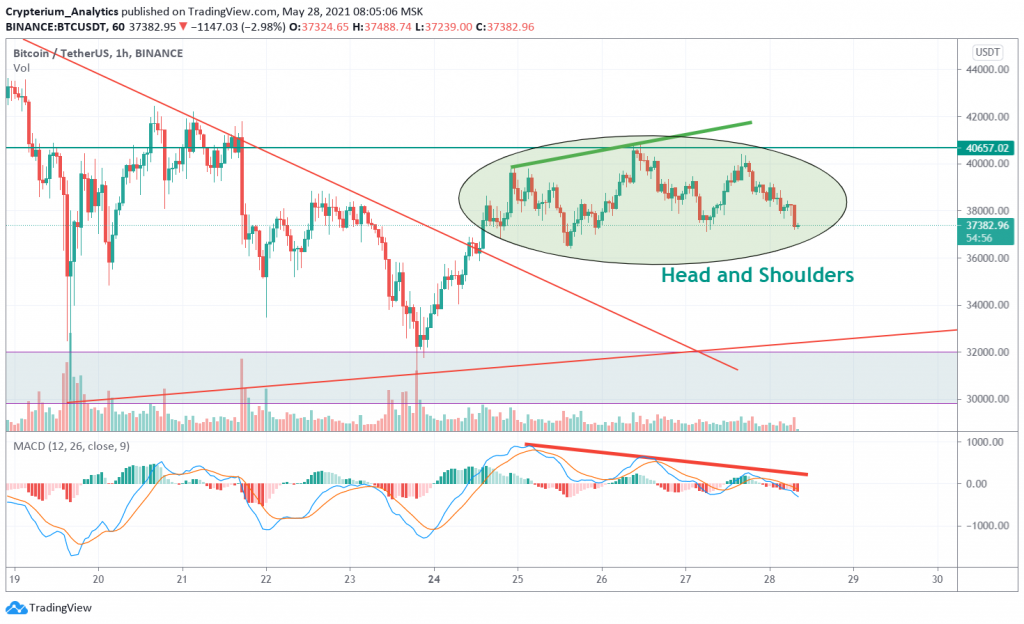 On May 24th, the chart broke through the downtrend from the bottom up, and after that, it grew by 10%. On the hourly timeframe, you can see that a head and shoulders pattern has formed. This is a reversal figure in an uptrend. If this pattern works out, the price of Bitcoin may drop to $32,000.

The second important sign is the formed bearish divergence formed on the MACD indicator. The peaks of the indicator are consistently decreasing, while the peaks of the chart are increasing. We’ve marked this with bold red and green lines. This is also a bad signal for Bitcoin. Judging by this indicator, the price may go down to $33,000. It may be a good time to fix the current position and cash out your profit instantly to your bank card.

Additionally, we have drawn a support line along with the chart lows, which were on May 19th and 24th. This line almost perfectly matches our forecast for Bitcoin decline. If the chart breaks this line even with a shadow of a candle, then the consequences for Bitcoin can be catastrophic. The price could fall below $30,000 and go into a sheer drop with many liquidations, as it happened in May.

However, this scenario has not happened yet. Therefore, it is necessary to closely monitor the $32,000 – $33,000 levels. When Bitcoin gets closer to them, it will be possible to make small purchases, but be sure to set stop-losses at a distance of 5% -10%. You must understand and remember that Bitcoin fell by 30% – 40% per day 2 times in the current month. That is why now it is better to either wait or defend with short stop-losses.