Crypto Daily: Bitcoin Is Worth $50,000; Where Will The Price Go In The Next Days The rest of the market has begun to recover from the last crash. Some altcoins have started to show a bounce and are growing by 10% – 15%. However, this time not all cryptocurrencies have such dynamics.

The Bitcoin crash has had a huge impact on the entire market. The charts of most cryptocurrencies have collapsed significantly and buyers are in no hurry to make their purchases. A wary mood reigns in the market.

Let’s take a look at the Bitcoin chart and try to predict its further movement: 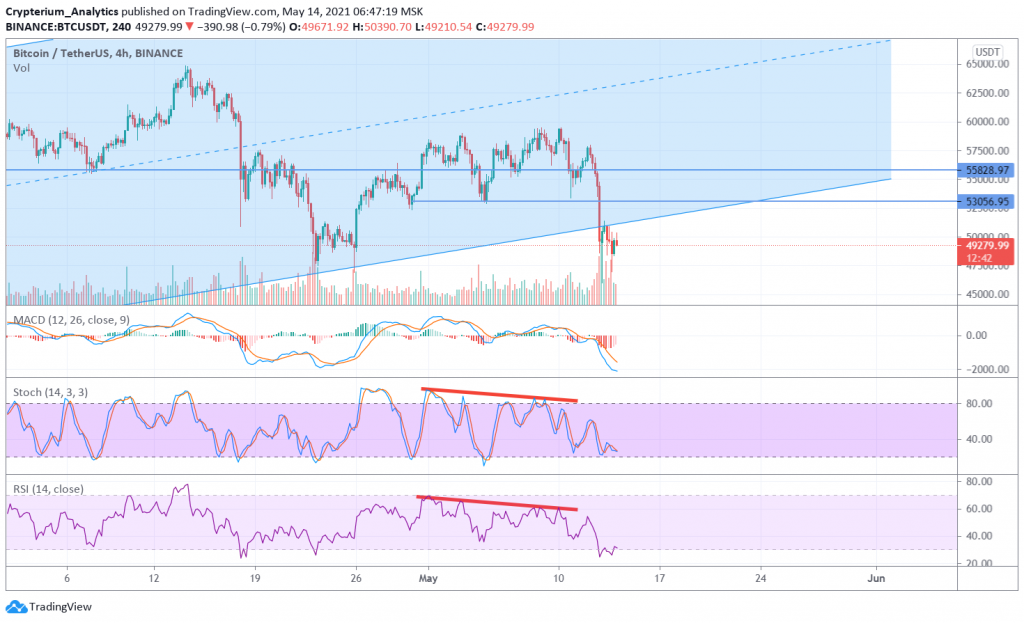 On May 12, the price of Bitcoin dropped from $57,000 to $46,000. At the $46,000 level, there was a strong reaction from buyers, with the result that the price quickly returned to the $50,000 mark. Such a strong decline led to the loss of the chart from the ascending channel. Price has already tried to return to it, but it did not work the first time.

Earlier bearish divergence was formed on the Stochastic and RSI oscillators, which is recouped by the current fall. Both indicators reached the oversold line and even fell below it. At the same time, the RSI begins to show signs of a reversal. Therefore, it is safe to say that this bearish pattern has been completely won back.

MACD also dropped significantly. Moreover, there has never been such a strong decline in this indicator on the 4-hour timeframe. But if you look closely, you can see that the moving averages are starting to turn up.

Based on this, we think that Bitcoin may rise in the coming days. It is very important for the chart to be able to return to the ascending channel and consolidate around $53,000. This level is the determining factor indicating further growth. This is indicated by the middle Bollinger line, Sideways Volumes and the Fibonacci Grid.

The current fall has caused a lot of panic in the markets. Many traders panicked and started selling their positions. However, at the moment it is too early to talk about a trend change. So far, it looks like another correction and shaking out weak hands.