The exception here is Dogecoin. As we remember, this coin became a symbol of the spring altcoin season of 2021, when it grew by 10 thousand percent. Thanks to this, Doge entered the Top-10 cryptocurrencies in terms of capitalization and is still there, ranking sixth.

Yesterday’s gains against the market stem from big news for Doge. This cryptocurrency is going to be added to the largest American cryptocurrency exchange Coinbase PRO on June 3rd. This gave explosive growth to the coin’s chart, which rose 15% over the day.

Let’s take a look at what to expect from the Dogecoin price in the near future and if this is a reversal after the fall: 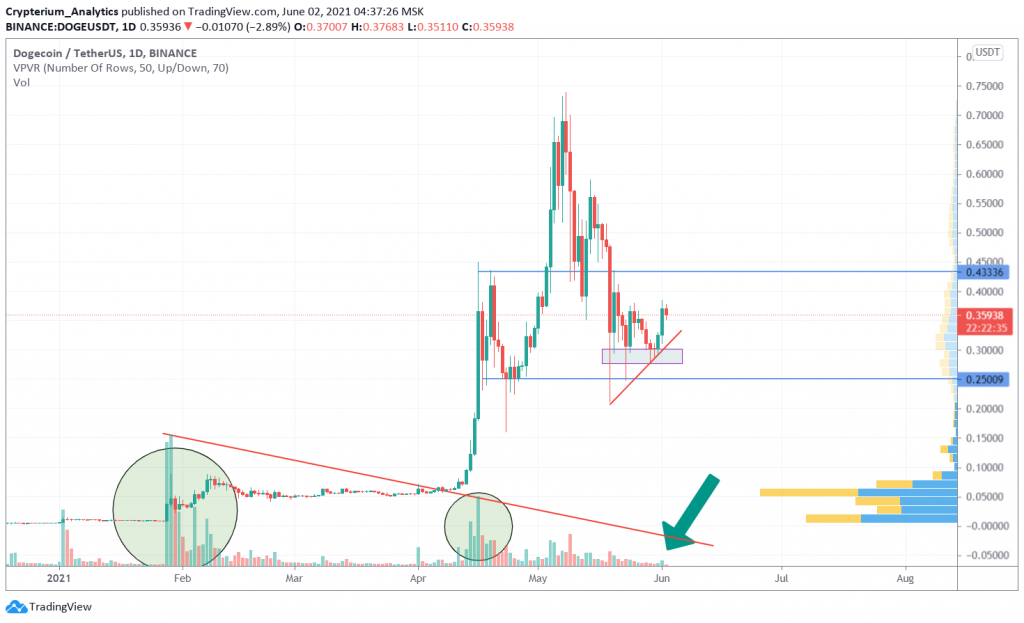 First of all, we want to draw your attention to the trading volume from the beginning of 2021. The highest trading volumes were observed during the increasing price from $0.005 to $0.07. The next big volume was the growth from $0.07 to $0.45. It was after this that Dogecoin attracted the attention of the entire public and the price literally flew up.

But if you look at the trading volumes of the last days, they look extremely bad. They are practically absent, which indicates the uncertainty of market participants in the further growth of Dogecoin.

Yesterday’s growth is more manipulative because on the news of the addition to Coinbase PRO, the price of all coins skyrockets. But after listing, the price stops such a sharp price movement and rolls back to the previous levels.

At the same time, it should be noted that a huge “head and shoulders” pattern is formed on the Dogecoin chart, which is a signal for a reversal. The resistance level at $0.43 is clearly drawn. The support level is in a wide range of $0.20 – $0.25. It was here that many market participants bought Dogecoin after massive falls.

Based on this information, it can be assumed that the growth potential of Dogecoin is no more than 15%. At the same time, if the price can reach $0.40, then a reversal pattern for a strong decline will almost inevitably form.

If the price reaches $0.25 and is able to gain a foothold below, then we should expect a powerful collapse in DOGE, since this is the last major support. The fall can be very sharp, up to $0.07 – $0.10. It is at these levels that the largest coin trade took place and therefore we expect to see it here.

Thus, the risk/reward rating for Doge is negative and it is extremely dangerous to enter into trades on this coin. The trigger for the fall can be a new collapse of the entire cryptocurrency market and Bitcoin. In this case, DOGE may not only fall the hardest of all the major cryptocurrencies but also fall out of the Top-10.