Over the past day, the price of Bitcoin has decreased by 3% and dropped below $63,000. Against this background, trading volumes rose by 15% to $43 billion yesterday. Almost the entire market followed Bitcoin and began to decline as well. With a few exceptions.

Crypterium native token, CRPT continued to show significant growth dynamics and grew by another 7% yesterday. Let’s take a look at its chart and see what we can expect in the near future: 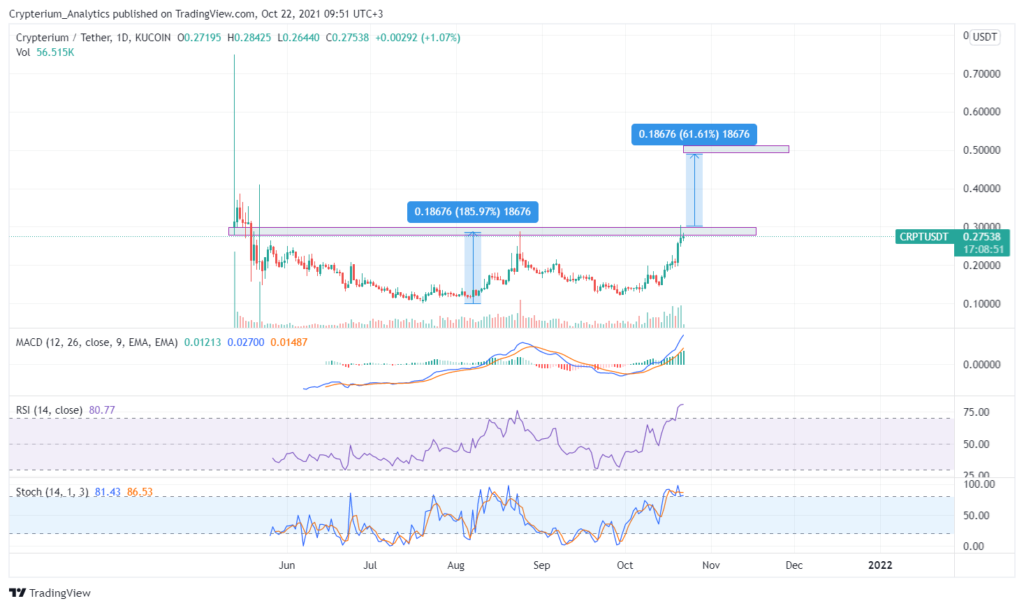 Over the past 5 months, the Crypterium price has not risen above the $0.30 level. This is a strong resistance level, near which sellers began to sell positions actively. If you look at the CRPT chart on HitBTC, it becomes obvious that the $0.30 level has been the most important starting from 2018. It acted as the level of support and resistance during upward and downward trends. Most likely, we can see the same pattern again.

Important to note that a “double bottom” pattern has formed on the daily timeframe. It is quite obvious on the weekly timeframe, which gives strength to this formation. All tops fall right at the $0.30 level. This allows us to say that if this level is broken, the price may rise by the size of the entire pattern, that is, to the range of $0.48 – $0.50.

In the past few weeks, the price of CRPT has risen by 120% and has begun to stall in recent days. Most likely, in the next 3-4 days the chart may consolidate at the current levels in the range of $0.25 – $0.27. This will help to unload technical indicators and pave the way for new growth.

It looks like now is just the beginning of an uptrend. That being said, the schedule is very similar to the MKR and BAT charts until the winter of 2020th. Recall that after that period, the charts of these coins have grown by hundreds and even thousands of percent. Potentially, a similar situation could occur with CRPT. It is possible that the exponential growth of the coin is not far off, as there has been a large phase of accumulation over the past 3 years. Together with the development of the Crypterium project, this can be a positive and encouraging signal.