Crypto Daily: Crypto Market dropped by 10% in just one evening Many altcoins have fallen by 10% or more of their market value. As a result, their market dominance dropped too.

This collapse resulted in major market liquidations. In just one day, exchanges liquidated positions that amounted to $500 million in total. It also triggered a significant number of stop-losses to be placed despite the fact that the Bitcoin price will not be unable to drop below $60,000 for a while longer.

What triggered an overall market crash is a large infrastructure plan, which was approved by the US President yesterday. Since this law has affected the cryptocurrency industry – and particularly crypto brokers, – it will now be subject to much stricter regulations. In addition, according to the new legislation, all transactions that surpass $10,000 will be transferred directly to the tax office. At the same time, many senators opposed the law, referring to the concept of blockchain and cryptocurrencies that will significantly complicate the adoption process.

As the market responded negatively to the news, many traders began to sell their cryptocurrencies, which caused a notable decline. Let’s take a look at the Bitcoin chart and try to understand what we can expect to see there in the coming days: 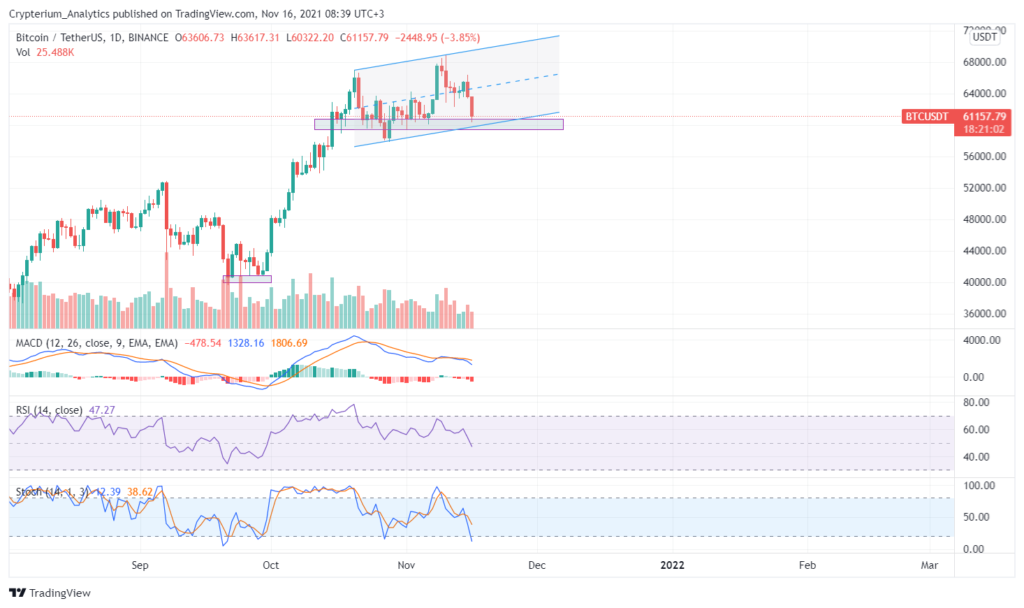 After yesterday’s events, the Bitcoin price settled at the previously indicated support level of $59,400 – $60,800. Then, buyers started making purchases, which caused a slight recovery of BTC to above $61,000 and once again demonstrated the strength of the ongoing support level.

The chart also shows a small upward channel, the trajectory of which the BTC price has been following over the last month. This means that Bitcoin may continue to lose its value and drop to the lower boundary of $59,800.

It is important to note that, this week, trading volumes also reduced along with the Bitcoin price that couldn’t manage to reach the important levels, where the struggle between bulls and bears is expected to unfold. This may change in case Bitcoin breaks the important psychological $60,000 mark.

Currently, the chart demonstrates a familiar three-wave correction. Afterward, we are likely to see Bitcoin slowing down and moving in a sideways direction between $58,000 and $62,000. This could be a good hoarding zone for the cryptocurrency and lead to its further growth. Otherwise, there will be a drop to the $57,800 mark. In this case, Bitcoin will probably transit to a local downtrend.