The altcoin market sank more significantly, by 4% on average. This led to the fact that the cryptocurrency market capitalization lost $100 billion per day.

This decline was again due to China, which once again threatened cryptocurrencies. This time, the central bank of China said that cryptocurrencies are highly volatile assets and threaten financial stability. A little later it became known that the largest exchanges Binance, Huobi and OKEx were blocked in China.

All this has once again affected cryptocurrencies. However, it is worth noting the fact that this time the market did not fall significantly, and Bitcoin did not react at all to this one. Most likely, this is due to the low liquidity on the exchanges during the vacation period.

Let’s take a look at the chart of the first cryptocurrency and try to figure out what to expect from it over the weekend: 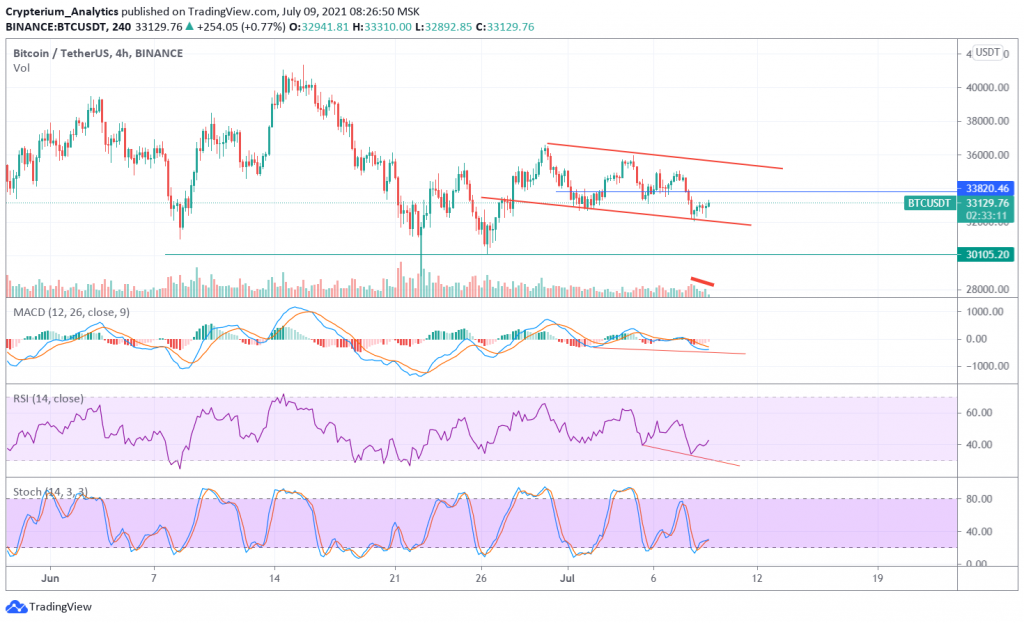 For the last 10 days, the chart has formed a downward channel and is moving inside now. The chart could not hold above the $ 33,800 level and fell down on negative news. The chart fell below the bottom formed on July 1st – 2nd and approached the lower border of the channel.

An important fact is that after the fall, we did not see a strong buyback and rebound. This can be judged by the low volatility after this fall and the declining volumes.

MACD also shows a downtrend on the 4-hour timeframe. The situation on the RSI oscillator looks even worse, as the moving average fell very sharply.

On the whole, everything indicates that this fall is not final. Bitcoin is currently very weak and has little liquidity. This creates the preconditions for a new decline. The market reacts poorly to news and so far there are no factors due to which the price of the first cryptocurrency can rise.

We expect a significant increase in activity in the event that Bitcoin drops to $30,000 and can break this mark from top to bottom. In this case, a lot of stop-losses will be broken, during which the price may fall even lower. This can happen at any time, so trading in the current situation is extremely contraindicated.