Senior Bloomberg Analyst Mike McGlone has said that Bitcoin is currently trading at an “extreme discount within an enduring bull market,” and could become global digital collateral. According toForbes, McGlone relied mostly on technical analysis of the 100-week moving average.

“Bitcoin is well on its way to becoming global digital collateral in a world going that way, and Ethereum is a primary driver of the digital revolution as evidenced by making possible the most widely traded cryptos — dollar tokens,” senior commodities analyst said.

Bitcoin is in a buy zone

Additionally, he explained that thePuell Multiplecurrently signifies buy. Puell Multiple estimates BTC sell pressure level from the miners by calculating the dividing Bitcoin daily issuance value in USD by the 365-day moving average of the daily issuance value. It is currently below 0.5, which puts it in the green zone and represents a strong buy signal. Thus, all these metrics point to BTC being on the edge of a breakout.

Meanwhile, other stakeholders also share the same opinion. Budd White, the chief product officer at crypto software company Tacen, believes BTC is “incredibly undersold but also in a major accumulation zone.” He added that Bitcoin has shown its resilience and has established a bottom at $18k even though it’s trading higher than that. This might be because the markets are pricing any additional hike by the Feds.

The performance of the cryptocurrency has already improved investors’ sentiment. According to the Crypto Fear & Greed Index, the index is currently at 31, representing fear. This is far from June 19, when it was at 6 -extreme fear.

The upward move was such that the price climbed above the $23,000 level and the100 hourly simple moving average. The price surpassed the 50% Fib retracement level of the downward move from the $23,477 swing high to $22,755 low.

Besides, there was a break above a key bearish trend line with resistance near $23,200 on the hourly chart of the BTC/USD pair. The pair is now trading near the $23,300 level. 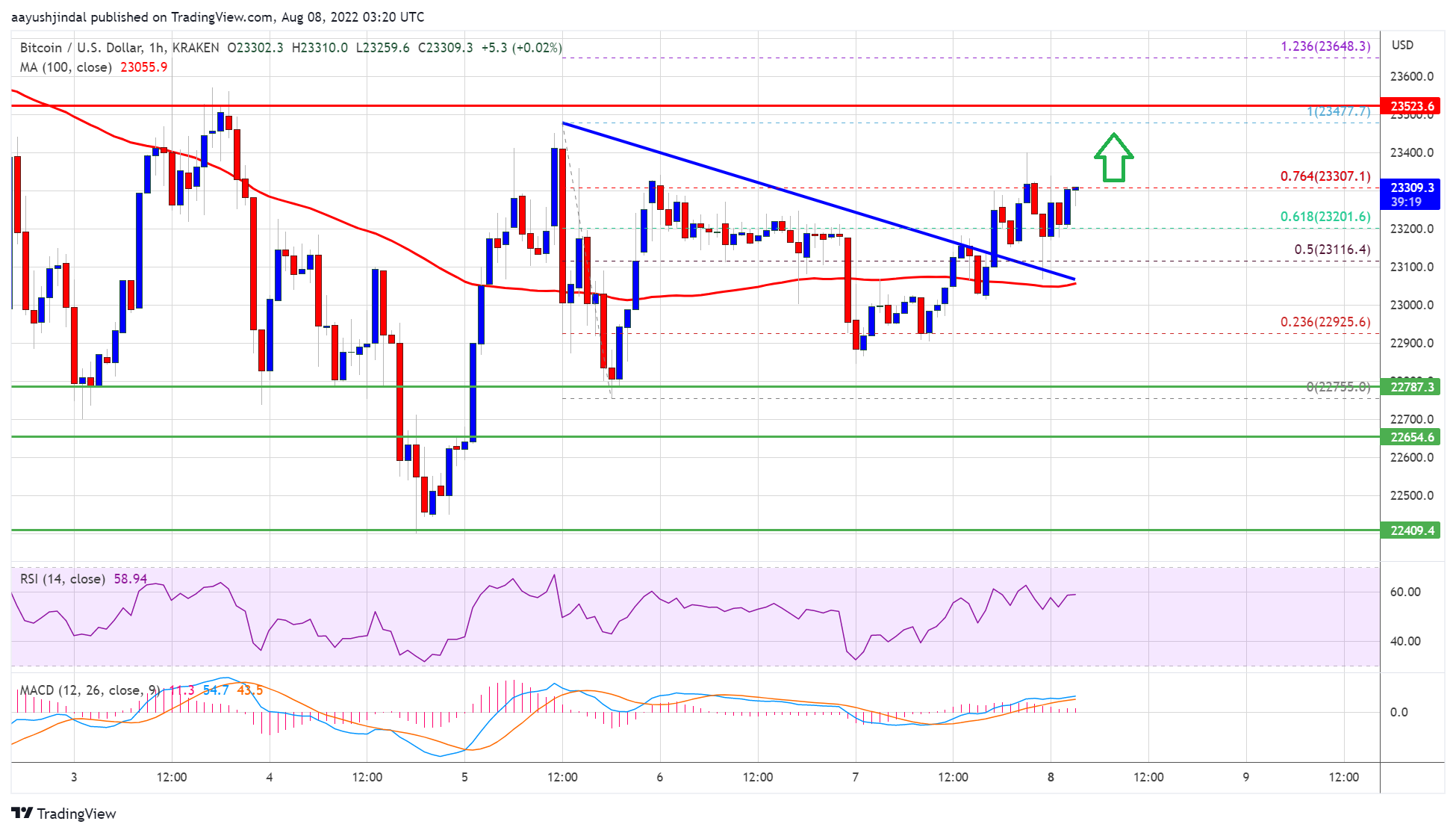 Dogecoin unseated from No. 10 spot in rankings

Dogecoin (DOGE) has been recently pushed aside by Polkadot (DOT) from the top cryptocurrencies list as it is now the 11thbiggest crypto in terms of market cap. DOGE’s market value is currently at $9.28 billion after it sadly had to let go of its position which is now held by Polkadot with a market value of $9.62 billion.

DOGE price remained the same despite the positive sentiment in the crypto space spiked by the support of Elon Musk, among other things. Michi Lumin, Developer of Dogecoin, has recently announced the release of a C library of DOGE building blocks coined as Libdogecoin. This library allows Dogecoin to integrate into different platforms.

In one of his appearances on the podcast “Full Send”, Elon Musk, billionaire entrepreneur and CEO of Tesla, once again pressed on with his unrelenting support for DOGE. “I’m mainly supporting Doge, frankly,” Musk said.

Musk reiterated that Dogecoin isn’t just a dog meme coin; it is not a joke because it has real utility value. He also said that in comparison to Bitcoin, DOGE has a much bigger transaction volume. Since early August, the price of DOGE hasn’t moved significantly because it’s been hindered by $0.075. The crypto market seems to be in a coma as it is being bombed by a lot of macroeconomic problems.

DOGE is lagging behind in terms of growth. At the beginning of July, the DOGE price is at $0.066. SHIB grew by 17% but DOGE price only registered a growth of 1.4%. DOGE token market cap only increased a bit from $8.77 billion to just $9.06 billion.

The social dominance of DOGE increased by 8.49% after the price racked up to $0.75. DOGE price plunged by 61% as social dominance nosedived by 3.3%. DOGE’s social volume further declined by as much as 63%. Developmental transactions within the Dogecoin network grew by 80% despite the lack of ecosystem updates.