Trading volumes continue to decline, but the dominance of Bitcoin in the market has slightly decreased and is 46% at the moment.

Ethereum also showed slight gains yesterday, up 2%. At the same time, the price of the second cryptocurrency in terms of capitalization has been holding above the important milestone of $2,000 for several days. Let’s take a look at the Ethereum chart and try to predict the further movement of its price: 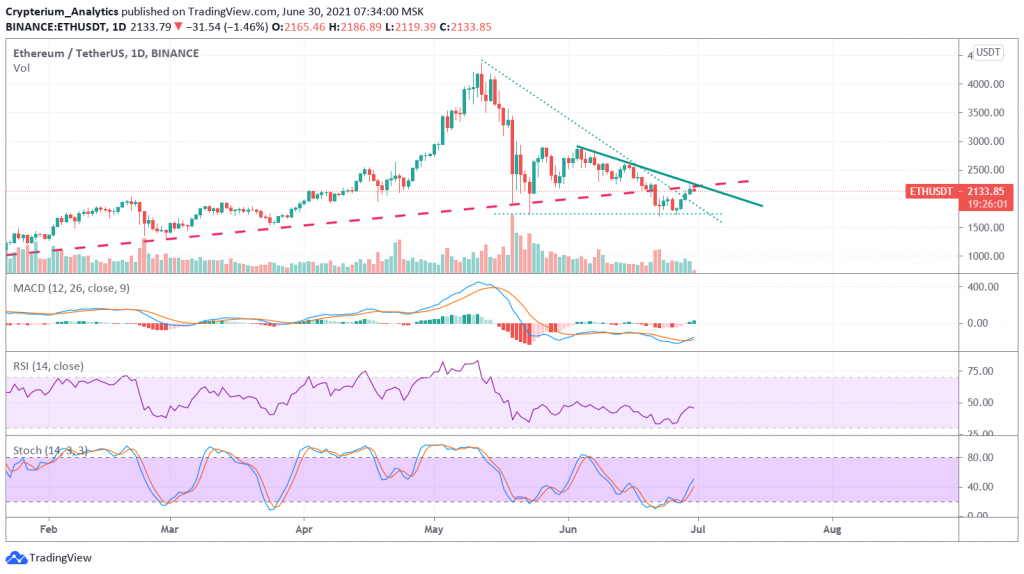 In the last 4 days, the ETH / USDT chart closed with green candles. During this time, the price of Ethereum rose from $1,800 to $2,165, or by 20% when looking at the opening and closing prices of candles. This is a pretty strong result.

The chart managed to get out of the descending triangle and gain a foothold above the downtrend formed since mid-May 2021. But it should be noted that the growth occurred at low volumes, which is a dangerous sign.

If the price can break it and gain a foothold above it, it will be a strong bullish signal. In this case, Ethereum can finally turn around and show a new round of growth up to $2,800. Now, buyers have not been able to overcome this level on the first try, but in the coming days, they will do it again.

As for the indicators, there is also no clear picture, only assumptions. MACD was below zero for a long time and showed absolutely no trend. In the last 3 days, a slight reversal trend has appeared, which may be a harbinger of new growth.

Stochastic and RSI hit the bottom just a few days ago, but turned around quite quickly and have already reached the middle line. So far, this does not indicate a reversal, but together with other signs, this can be taken into account.

Most likely, the growth of ETH is due to fundamental reasons. In July, a new London hard fork is expected to be launched on the mainnet Ethereum blockchain. Already, the developers are honing this update on testnets, and if everything goes well, it will become a good starting point for the growth of the second cryptocurrency in terms of capitalization.

The situation can be spoiled by the general situation on the market, which is not yet favorable for growth. Therefore, if you enter into trades now and buy ETH, then be especially careful and set short stop losses.