At the same time, the rest of the market is showing growth. Most likely, this is due to the flow of capital from Bitcoin to altcoins. As a result, the dominance of Bitcoin has been declining for 7 days in a row and now stands at 44%. Last week this indicator was 48%.

Thus, the rest of the market is starting to catch up with Bitcoin by growth. Let’s take a look at the chart of the largest altcoin by capitalization – Ethereum: 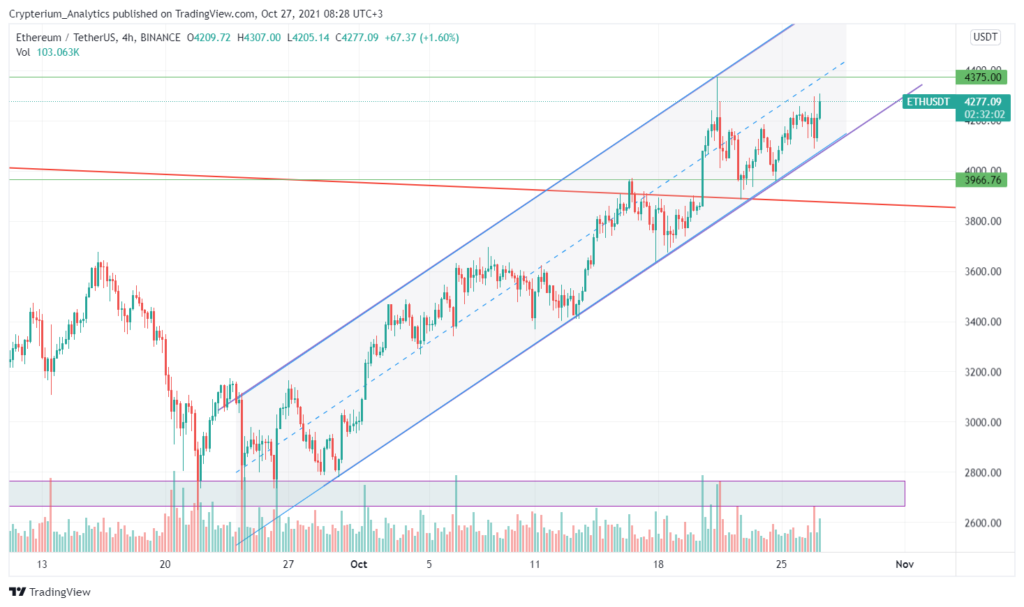 A week ago, the price of Ethereum surpassed the $4,000 mark and consolidated above it. Moreover, the chart even set a new ATH at $4,375. However, this high is only $3 higher than the previous record. This suggests that ETH met strong resistance at this level.

Since that time, the chart has moved sideways in the range of $4,000 – $4,300. Most likely, buyers are gaining positions before a new round of growth. We think that in the coming days the chart will approach ATH again and set a new all-time high.

For a month now, Ethereum has been moving in an upward channel. At the moment, the price has bounced off the lower border and is approaching the middle line, which is at $4,360. This only reinforces the importance of the $4,375 zone, where the big sellers are located.

This level is further strengthened by the indicator called Bollinger Bands on the daily timeframe. The upper border of this oscillator is $4,378.

All of this tells us that the $4,350 – $4,400 range is the last major resistance level. Nevertheless, the chart has clear upward potential and we will soon see a fight between bulls and bears at this level.

Probably the bulls’ victory could be slightly higher as it can be supported by some fundamental factors. So, today at 11.00 UTC, the developers will activate the Altair update on the Ethereum 2.0 network. If everything goes well, then all the bugs and problems of this network will be eliminated and the developers will be able to move on to preparing for the final merger of Ethereum and Ethereum 2.0.

Therefore, the likelihood of a strong upward surge in the coming days is very high. In this case, the Ethereum price could rise to the range of $4,800 – $5,000.